Jupiter Peraza made these slightly edited remarks at an April 1 webinar, “Trans Day of Visibility,” organized by the LGBTQ+ caucus of Workers World Party. Peraza is an undocumented trans woman activist, DACA (Deferred Action for Childhood Arrivals) recipient, program associate for the Transgender District in San Francisco and coordinator of the District’s Housing Opportunities for Trans Tenants. Her work focuses on immigrant rights and voter mobilization.  Peraza’s remarks responded to questions of treatment for transgender people inside prisons and detention centers and whether our incarcerated transgender siblings have rights to specialized medical care or hormone treatment. Go to youtu.be/iBNkGU9NO4M to view the entire webinar. 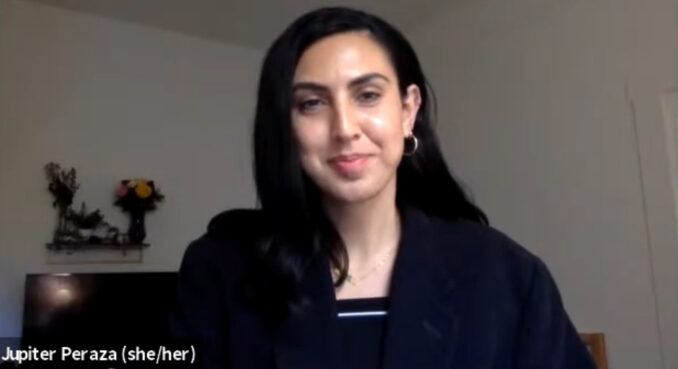 Our trans siblings do not have adequate care in detention facilities. A case that I want to talk about is connected to how the U.S. government had responsibility in overthrowing the progressive government in Honduras.

Roxsana Hernandez was a 33-year-old transgender woman from Honduras, who was fleeing her home country and coming to the United States to seek asylum after being displaced and after being raped by gangs in her country.

She fled her country to be able to seek protection and safety in the United States in 2019. This was during the Trump administration which limited and made it hard for trans people to seek and receive asylum productions. A little over two weeks after she arrived in the U.S. seeking safety, she died in ICE [Immigration and Customs Enforcement] custody after she was transferred from one facility to the next within a timespan of as little as six hours.

To ICE’s standards, individuals who are HIV positive must receive a 30-day supply of medication before being transferred. And there is no evidence that Roxana received that medication, which led to her death. And there was absolutely no record of this, and ICE still has not faced any repercussions. So this answers your question as to how trans people are not being taken care of in detention facilities.

When you think of detention centers, you think of cisgender immigrants, and that is something that comes up front. And transgender people very often go ignored when it comes to these facilities. Roxsana was held at a facility that was run by CoreCivic.

It’s a for-profit, private prison [corporation] that runs several detention centers along the border, very similar to GEO Group. I had the pleasure and the honor to speak outside of 111 Taylor in San Francisco, where the Compton Cafeteria Riots happened in the summer of 1966.

GEO Group runs a private prison in that same building. We were there to denounce GEO Group being in that district, which is historically a trans and gender-nonconforming neighborhood that holds so much history that dates way back to the late 1800s and early 1900s.

Even with the Biden administration, there should not be for-profit detention centers. And this also goes along the similar lines of we need to defund ICE.  People are under this perception that ICE takes care of our national security, which is absolutely not true. ICE was created after 9/11, after this whole scare of who is a threat to national security.

Just to briefly touch on how trans people are barred from receiving medical care and hormone treatment. Even though I am a DACA recipient, I still fear that I might get deported one day, that I might get detained by ICE and sent to a detention center where I will not have access to health care and where I will be put in a facility with cisgender men, where I do not belong.