Buffalo, N.Y. — Activists demonstrated here Feb. 28 in solidarity with the family of Daniel Prude and the people of Rochester, N.Y, where police killed Prude while answering a mental health crisis call in March 2020. 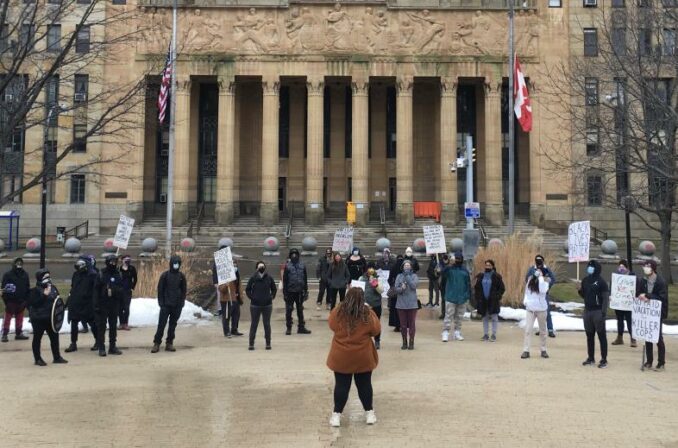 The police response was to put a “spit bag” over Prude’s head and press his body and face into the pavement for several minutes. He stopped breathing and was sent by ambulance to a hospital. A week later he was declared brain dead and taken off life support. Coroners have ruled his death a homicide.

The Rochester Police Department attempted to cover up its crime, preventing the release of body cam footage of the incident until September 2020. The release generated weeks of protest, and Prude’s family vowed to sue the city over their loved one’s death. A grand jury declined to indict the cops who were responsible, prompting another round of protests.

At the Feb. 28 Buffalo demonstration, representatives of Queen City Worker’s Center, Justice for Migrant Families and Workers World Party spoke, drawing parallels with the cases of Troy Hodge in Niagara Falls and India Cummings in Buffalo. Both died in jail following their arrests during mental health crisis calls. Speakers called for solidarity with political prisoner Mumia Abu-Jamal, in view of his recent COVID-19 illness, and with prisoners at the ICE (Immigration and Customs Enforcement) detention center in nearby Batavia.

Speakers raised demands for the statewide passage of Daniel’s Law — named for Prude — which would form mental health units to respond to mental health crises instead of cops. The legislation would mandate that police stop the use of “bola wraps,” a restraint launched from a firearm which hooks into a person’s skin and lassos them. The Buffalo Police Department acquired this weapon in 2020, despite public outcry, and first used the bola wrap against a person during a mental health call this January.