“Philadelphia has declared itself a ‘sanctuary city,’ but how can it be a sanctuary city without its schools being sanctuaries for all students?” asked Erika Guadalupe Nuñez of Juntos at a well-attended March 1 press conference outside the School District of Philadelphia headquarters. 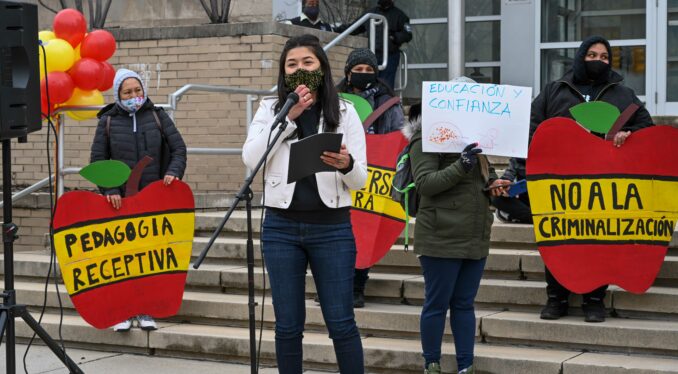 A major demand being directed at school officials is to set clear rules and better train staff and teachers on restrictions against Immigration and Customs Enforcement (ICE) involvement in city schools.

City Council members Helen Gym and Kendra Brooks spoke in support of the campaign, which began after ICE officers detained a pregnant mother over a year ago. She had just dropped off her child at Eliza B. Kirkbride Elementary School in February 2020 in the Passyunk Square neighborhood of Philadelphia. The action caused ripples of fear through immigrant and refugee communities.

The recent press conference launched the Sanctuary Schools campaign, whose brochure points out: “Sanctuary Schools can and should be utilized as a vessel towards healing the traumatic impact of a global pandemic, racist government administration and long-term effects of heightened immigration enforcement. [W]hat we are asking for is not new. Schools have been used for too long as colonial tools to assimilate and criminalize youth and their families. We say no more!”