On Jan. 29, the Laundromat Wash Supply workers scored a groundbreaking victory against their employer. For many years, the employees of Wash Supply have faced precarious working conditions at the workplace. The workers believed that the best tool they had to change the workplace was organizing and forming an independent labor association. 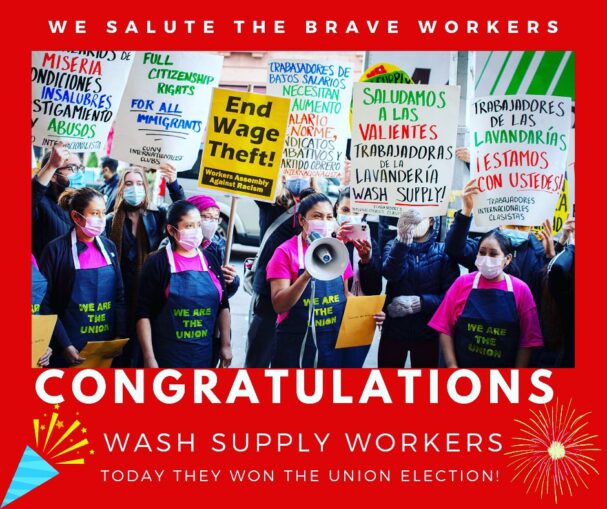 In New York City and other parts of the country, the retail laundromat industry is plagued by precarious working conditions. Laundromat industry employees have suffered from abuses by employers and the negligence of governmental institutions to investigate and enforce the existing laws that protect workers.

One of the typical examples of exploitation in this industry is wage theft. The report “Employers steal billions from workers’ paychecks each year,” by David Cooper and Teresa Kroeger, states that wage theft is “the failure to pay workers the full wages to which they are legally entitled.” According to Cooper and Kroeger, “wage theft can take many forms, including but not limited to minimum wage violations, overtime violations, meal break violations, pay-stub, and illegal deductions or misclassification.”

The report findings demonstrate the precarious conditions of low-wage workers in the 10 most populous states where workers are most likely to be paid less than the minimum wage — in Florida 7.3%, Ohio 5.5% and New York 5.0%. Those workers suffering minimum wage violations have been underpaid an average of $64 per week, which means that a year-round worker is losing $3,300 per year and receiving only $10,500 in annual wages, according to Cooper and Kroeger.

One in five workers underpaid

Another finding was that “more than half of workers were subjected to harassing conduct in the workplace, ranging from racial slurs and insults to threats and intimidation.” In 2019, Wash Supply employees approached the Laundry Workers Center. Our goal at the beginning was to communicate that our employer was stealing our wages. LWC conducted an investigation and found indeed that our wages were stolen.

At that time, Mahoma López, the lead organizer and co-executive director, explained to us that the organization does not focus just on the violation of wage theft. As co-director and lead organizer of the Laundry Workers Center, it is critical to articulate the organization’s vision, which is to empower low-wage workers and train them to organize to make real changes in the workplace and their communities. We believe that those who suffer exploitation in their workplaces must learn how to organize and educate on issues beyond their workplace in order to change the dynamic of exploitation. Thus, Wash Supply employees enrolled in the LWC leadership institute learn the power they have when they learn their rights.

Through the leadership institute, the workers began to build political consciousness and imagine their power as working class. When they realized what power they had, they decided that the best way to ensure workplace changes was to organize and form a worker’s association.

Critical for workers to become organizers

As the lead organizer of the campaign and co-executive director of the Laundry Workers Center, Lopez understood that it was critical for the workers to become organizers by learning a critical set of organizing skills. My personal experience as a leader of the Hot and Crusty Campaign in 2012 helped me understand that leaders need to become the strategists, the communicators, the tacticians, the agitators and political educators of their campaigns. Thus, when Wash Supply workers participated in the leadership institute, they learned how to develop strategies, tactics and how to run a campaign in their community and workplace.

Furthermore, they learned how essential it is to develop a profound analysis of workers’ political and economic conditions in the U.S. and worldwide. Nine years ago, on Jan. 21, 2012, those education sessions helped to liberate us from the exploitation we suffered in Hot and Crusty; and on Jan. 29, the workers of Wash Supply accomplished the same goals.

Many workers are hungry for justice and ready to learn to organize in their communities and workplace, but they are not getting the support they need from community and labor organizations. As organizers, we need to spend more time recruiting, training workers, and building power, or the option is more exploitation and inequality.

Finally, the workers have built a network of solidarity with different partners of the social justice movement such as the Solidarity Center, Workers Assembly Against Racism, the Internationalist Group, and other community and labor organizations that empower them to believe that winning better working conditions was, is and will be possible. The management continues retaliating against us for organizing, but we will never stop fighting for our rights.