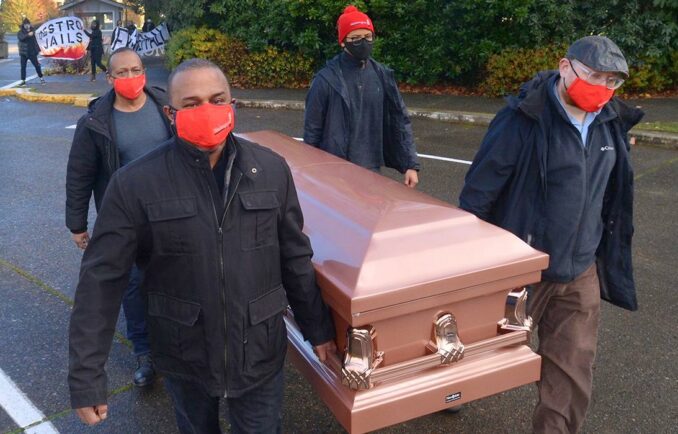 On Dec. 9 an incarcerated person at Stafford Creek “men’s” prison, near Aberdeen, Wash., died of COVID-19. The same week, coronavirus infections tripled from 85 to 237 among the imprisoned there.

In response to this person’s death and the alarming increase in infections, the imprisoned people staged a protest. They demanded warm food, clean clothes, and showers. Importantly, they demanded the prison stop censoring their mail so they could tell family and friends the truly bad conditions under which they contend with COVID inside the walls. They also demanded not to be additionally punished with the extremely harsh and inhumane conditions of solidarity confinement if they tested positive for the coronavirus.

Family members say the response from the prison administration to these basic demands for humans rights was a “riot.” Guards attacked the protesting people. One was forced into their cell, beaten viciously, and as they lay unconscious on the floor, their cell was filled with pepper spray. Their comrades in neighboring cells — all on lockdown — thought they were dead. The people were locked-down in whatever place they happened to be when the lockdown began; some were locked in spaces without access to toilets. (tinyurl.com/yacb7s3h)

Katie Wilks, whose husband is in G unit [at Stafford Creek], said her biggest concerns have to do with staff “playing musical cells” in his unit. She said her husband had been placed in four different cells with three different people in the last four days.

“We are still American citizens and still have the same rights as everyone else,” her husband wrote in a message to her Wednesday. “We were sent to prison to be helped and returned to normal life. How does anyone think that someone could ever be able to properly re-enter this country when our own citizens don’t care if we live or die?” (tinyurl.com/y9bn4lkw)

Danna Anders, who has a close friend incarcerated at Stafford, said last week that conditions there were “horrible.”

Note: The writer corresponds with a transwoman in Stafford. The word “men’s” is in quotes because it is the State of Washington’s gender designation for this prison, even though transwomen and a spectrum of gender nonconforming people are imprisoned there. Also, transwomen, while allowed to transition, are known officially only by their dead names; they cannot use their chosen names in any official capacity, unless legally changed.