Since the beginning of the Black Lives Matter movement in 2014, there have been at least 100 car attacks on protesters in the U.S.

Most recently, in Manhattan near 39th St. and Third Ave., a car plowed at high speed through a group of  protesters on Dec. 12. They had been marching in solidarity with a hunger strike by people incarcerated at the ICE detention center in Bergen County, N.J. The jail is just across the Hudson River from Manhattan. 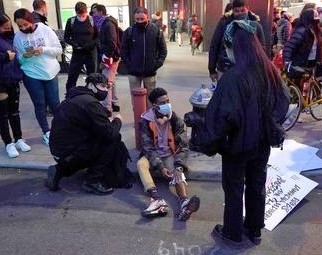 The marchers were chanting “Free them! Free them all!” immediately before the car struck. Six people were hospitalized, with injuries ranging from minor to serious.

The driver was Kathleen Casillo, a 52-year-old white woman from the New York City borough of Queens. The police went easy on her. She received a desk appearance ticket for “reckless endangerment” after she told the cops that the protesters “frightened” her. In most cases, a desk appearance implies a misdemeanor charge, given for a relatively minor act.

In contrast, the cops ticketed one protester, Nicole Besuden, for “obstruction of governmental administration” and “disorderly conduct” simply because she was helping a friend who had been hit by the car when an EMT driver arrived to pick up the injured person.

Some protesters claimed on Twitter that the police, who flooded the area with bicycle cops after the car strike, arrested a number of protesters. Some Twitter video feeds show cops forcing protesters into unmarked cars.

Coverage of this violent incident was widely picked up on international social media. A chilling video clip on Twitter of the car accelerating through the crowd has been viewed tens of thousands of times.