A significant roadblock to Mumia Abu-Jamal’s appeal of his unjust 1982 murder conviction was removed on Dec. 16, when Pennsylvania Supreme Court justices dismissed an attempt by the Philadelphia Fraternal Order of Police to obtain a change of venue in the case.

With this new ruling, all of Abu-Jamal’s pending appeals and motions in the Pennsylvania Superior Court will move forward from where they left off in February, when the state Supreme Court stayed all proceedings until the justices decided on the FOP’s King’s Bench petition. 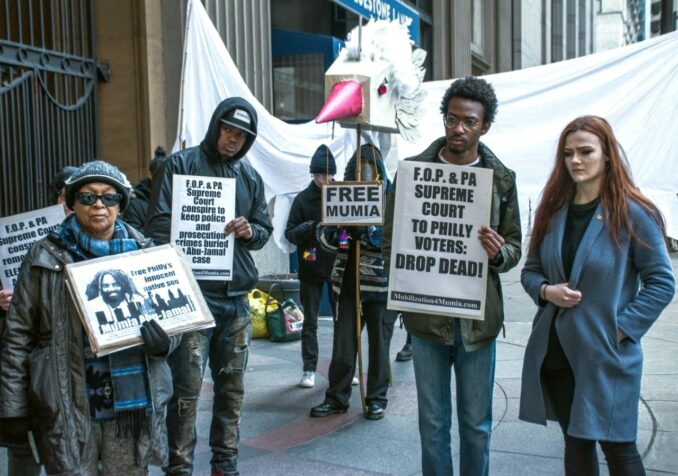 In late February, Abu-Jamal and his supporters were waiting to see if Philadelphia District Attorney Larry Krasner would agree to a request by Abu-Jamal’s attorneys to remand his case back to the Philadelphia Court of Common Pleas. Their request stemmed from findings of significant evidence of police, prosecutorial and judicial misconduct in six boxes of hidden evidence that had been discovered in the district attorney’s office in late December 2018.

After lower courts in October 2019 denied their request to be “parties of interest” to the case, the FOP and Maureen Faulkner — once the spouse of the police officer Abu-Jamal was unfairly accused of killing — intervened in February. They filed a rare King’s Bench petition seeking a change of venue.

Falsely claiming that members of DA Krasner’s staff were biased in favor of Abu-Jamal, the FOP and Faulkner used the archaic King’s Bench — generally reserved for “extraordinary relief” — to have Krasner’s office removed from handling the appeals in the case. They sought to have the more conservative Pennsylvania Attorney General Josh Shapiro take over as prosecutor. Several former Philadelphia prosecutors who played a role in Abu-Jamal’s prosecution, but had been fired when Krasner took office, now work for Shapiro.

The state Supreme Court accepted the petition submitted by the FOP and Faulker and then appointed retired Judge John M. Cleland, of McKean County, to serve as a special master in the case. Although Cleland concluded his investigation and made recommendations late this summer, the court delayed a final decision until now. They have yet to make Cleland’s findings public.

While King’s Bench was not intended for use by an individual or group simply displeased with a government action, it appears that the state Supreme Court continues to make exceptions when it comes to the police. Many justices on this court, including two on the panel that ruled in favor of the petition, receive FOP funding.

This court’s actions delayed Abu-Jamal’s pending appeal, which involves charges of misconduct by retired Justice Ronald Castille, a former member of the same court. His well-established alliance with the FOP and bias against Abu-Jamal is central to this case.

In 2016, the U.S. Supreme Court ruled in Williams v. Pennsylvania that it was  improper for a prosecutor who had sought the death penalty to later rule, as a judge, against the same defendant’s appeal. That decision involved Castille, who was Philadelphia district attorney during Terrence Williams’ murder trial. Later, after becoming a state Supreme Court justice, Castille rejected Williams’ appeal.

The FOP’s  “Hail Mary” efforts in this petition reflected their futile efforts to prevent the truth from ever seeing the light of day in Abu-Jamal’s case.  Many politicians whose careers were built on their participation in this case stand to lose their status.

As of last February, Abu-Jamal’s attorneys had submitted briefs rearguing issues that have been unconstitutionally dismissed by the state Supreme Court over the course of almost two decades. This was because of the conflict of interest involving Castille, then a justice in that court.

Abu-Jamal’s lawyers asked the state Superior Court to remand the case to the Philadelphia Court of Common Pleas to review the new evidence in the case. The district attorney’s office can now submit its responding briefs to the Superior Court.

Not waiting for the court’s ruling, Abu-Jamal supporters have continued to advocate for him in this case, despite limitations imposed by the coronavirus pandemic. In April, they held a virtual press conference and a teach-in on his case and those of other political prisoners. A second virtual press conference on Nov. 16 featured statements by Dr. Angela Davis and former NFL quarterback Colin Kaepernick calling for his release.  They are determined to win Mumia Abu-Jamal’s freedom after 38 years of unjust incarceration.