Skehan delivered the Workers World Party solidarity message at the Dec. 12 action called by the Boston South Asian Coalition in support of farmers and workers in India who are leading historic strikes.

As we come together on a rainy Saturday, there is much cause for revolutionary optimism as we lift up and learn from the mighty workers’ struggle in India today. 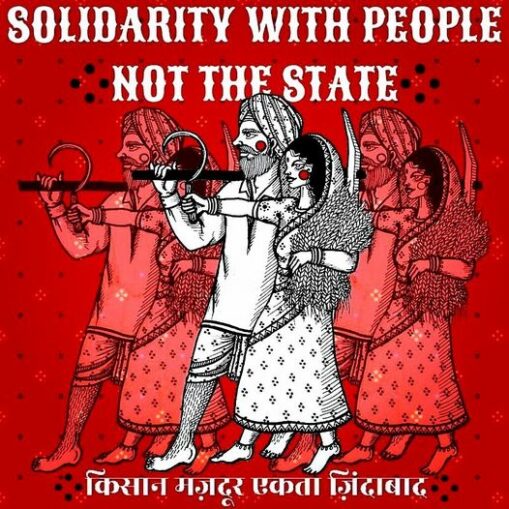 On Dec. 15 of last year, the courageous women-led uprising in Shaheen Bagh, Delhi, was born in direct response to India’s state-sponsored violence and repression against Muslim students, workers, their families and migrants. With women in the lead, this movement quickly spread across India and electrified the world, inspiring women workers and our class everywhere.

The breadth and strength of the Shaheen Bagh movement caused the Modi government and its imperialist backers in the U.S. and Britain to tremble with fear, seeing the organized determination of the workers and most oppressed in society fighting back. Well, they’re still trembling today after two world historic strikes have shook the Indian state and global capitalist system in just a year’s time!

Workers World Party salutes and applauds the latest massive Nov. 26 strike of 250 million people, plus workers and farmers that shut down India. This massive outpouring of militant, organized labor is exactly what is needed here in the U.S. It is also why there is almost zero coverage in the U.S. corporate-controlled media of this historic workers’ mobilization against austerity and repression.

The U.S. ruling class fears what the working class is capable of when it gets inspired, organized and unified in demanding social, economic and political justice, along with reparations for centuries of crimes against Indigenous and Black and Brown peoples.

The farmers who grow the food to feed the people must be defended and their rights and just compensation restored! To hell with the new anti-farmer bills and labor codes that will reap megaprofits for the greedy agribusinesses and bosses while stifling workers rights and wages!

The images of farmers breaking through blockades to march on Parliament and workers holding sit-ins and mass rallies, blocking train tracks and burning effigies of Modi — all of these would bring much holiday cheer to U.S. workers under attack, if they could see and feel the strength of this massive, coordinated fightback.

Workers here want to study and learn from the organizing methods and tactics of workers in India, and the unions, and socialist and communist organizations — on how they reach the masses and mobilize them into an organized strike force.

Today, we must prepare to “Fight or die!” as the triple threat of Covid deaths, systemic racist terror and capitalist decay accelerates, causing misery for workers everywhere!

We call for the U.S. government to immediately withdraw all aid and support for the repressive Modi government. We demand a repeal of its discriminatory Citizenship Amendment Act. We call for the Boston City Council and cities across the U.S. to pass resolutions condemning discriminatory and racist laws in India, supported by U.S. imperialism. We see a direct parallel between the CAA and U.S. laws written to terrorize Black, Brown, Indigenous, immigrant and poor workers, including caging children and families and executing oppressed and disabled people incarcerated on death row.

This latest strike of over a quarter billion people in India is an earthquake of resistance and the aftershocks can be felt from Wall Street to Fleet Street — by all of finance capital. The Modi government and imperial powers have effectively been “served notice.” Their time is up!

This organized resistance by the workers in India is what we need here at home to fight hunger, evictions, unemployment, racist police murders, the tortuous, for-profit prison system, oppression of migrants and capitalism’s destruction of the planet.

We dream of a sea of U.S .workers marching in their own class interest, and waving red flags, a symbol of the workers’ strength and unity against capitalism — as we have seen in India, and in China, Cuba, Venezuela and Vietnam where socialism is advancing.