Hundreds of millions of Indian workers and farmers staged the world’s largest strike on Nov. 26 and are continuing to shut down areas of the economy. On Dec. 12, the anniversary of the racist and discriminatory Citizenship Amendment Act of India’s fascist-minded Modi government, the Boston South Asian Coalition brought international solidarity with these laborers to an organizing center of the world-imperialist project: Harvard Square in Cambridge, Mass. 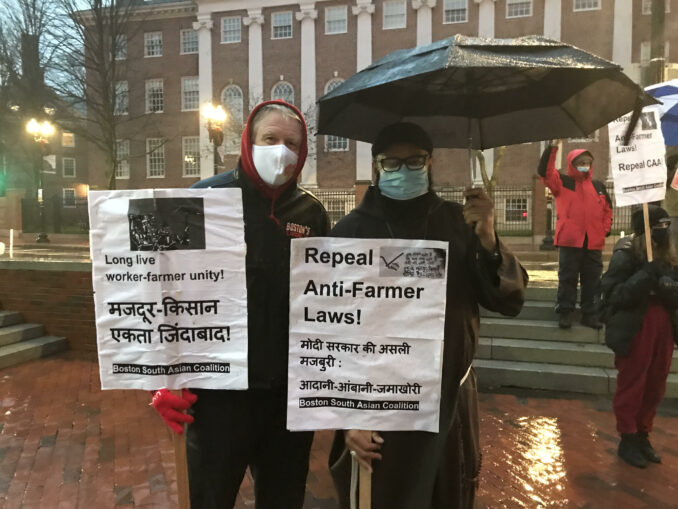 Nearly 100 people came out in the pouring rain to denounce the U.S. and Indian governments’ violent police-state and austerity attacks against India’s multinational working class.

Speakers from a broad range of progressive organizations applauded the occupation of New Delhi by hundreds of thousands of farmers, who have been brought to starvation by neoliberal laws slashing compensation for their produce.

Workers World Party’s solidarity statement, given by Maureen Skehan, called “for the U.S. to immediately withdraw all aid and support to the repressive Modi government.” Skehan added: “To hell with the new anti-worker farm bills and labor codes that will reap megaprofits for greedy Wall Street agribusinesses like Bayer-Monsanto, and stifle workers’ rights and wages!”