Dec. 14 — The Kinney family — owners of the now internationally famous “Red House on Mississippi” — is the last Black-Indigenous family in their neighborhood. They have been fighting foreclosure, and now eviction, since 2018.

The house, purchased in 1955, is in the Albina district — a collection of neighborhoods in the only sections of Portland where Black people were allowed to own property for most of the 20th century. The district, home to the majority of the city’s Black population, has long been under attack by developers and gentrifiers and targeted for so-called urban renewal — actually, removal. This once vibrant Black community has been destroyed. 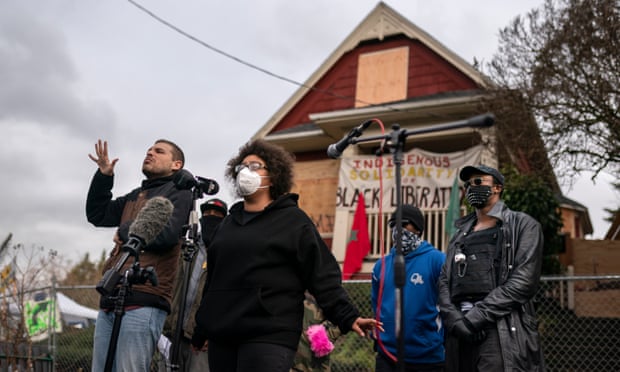 In its place, the banks — historical redliners — and wealthy real estate developers, aided and abetted by the city’s white politicians, have built an interstate highway, a sports arena, a hospital expansion, along with thousands of new, high-priced houses, condos and apartments. For the most part, people of color, poor and working people have been priced out of Albina, where the median price of a house is now $649,000.

The Kinneys say they paid their mortgage on time but got caught up in a predatory loan scheme to take their home. Urban Housing Development LLC purchased the property in 2018, but the family remained in the house while pursuing lawsuits in state and federal court to keep the home.

After a years-long court battle over the foreclosure, a judge ordered the Kinneys evicted in September 2020. The attempt to evict the family led to a mobilization of militant support.

In an effort to defend the Kinney family from eviction, hundreds of Black Lives Matter, antifa, black bloc, Occupy, Popular Mobilization and other Black youth, people of color, white, queer revolutionaries have established a Red House Autonomous Zone similar to Seattle’s Capitol Hill Autonomous Zone. It involves a compound of about six square blocks around the house that includes a kitchen serving free meals and a coffee shop supporting the movement with free coffee. On Dec. 8, the compound was attacked by Portland police.

On Dec. 10, this reporter entered the compound, now behind 10-foot-high barricades, to learn more about the police assault. I was warmly greeted by defenders, offered free food but asked to not take photos. It helped that I brought a Workers World newspaper with the headline: “Evo Morales returns, Bolivians eject coup regime.”

Police broke down the front door and assaulted the owner Michael Kinney and others asleep in the house. Deputy sheriffs arrested them and charged them with trespass in their own house. Their guests were also arrested.

The defenders were unable to stop the initial assault on the house and the arrest of Michael Kinney and the others inside. But very quickly the hundreds of defenders regrouped and prevented the deputies, who were backed by the cops, from taking possession of the property and house and removing its contents.

The organizer recounted how defenders armed with wooden banner and placard poles, broom handles, tree limbs, baseball bats, trash can lids and other homemade defensive weapons, in an organized and military fashion, “pushed the cops down the street and out of the neighborhood.”

Another activist told WW: “Twelve of our people were grabbed by the cops, but for lack of evidence, most were released uncharged. The Portland cops announced the same day that they would arrest no more until those arrested were actually charged with something.”

It was clear that the activists were serious about defending the Kinney family. While in the compound, this reporter was told by young activists: “We’re here to stop the eviction. We’re waiting for our marching orders.” Just then a platoon of maybe 30 people marched by, chanting in cadence, carrying poles and shields. As a former U.S. Army soldier and an organizer for the American Servicemen’s Union (1968-69), this reporter knows a military formation when they see one.

Since the arrests, more and more fighters have gathered behind the 10-foot-high barricades surrounding the house, where many live round the clock. People have brought in boxes of food and crates of bottled water, firewood, sleeping bags, tents, canvas sheets and more. The nice smell of food cooked, along with the biting but pleasant aroma of smoke from cedar wood fires, wafted over the compound.

Barricades were strengthened in anticipation of more police attacks. Groups of a dozen or so stood watch around wood fires near entrances, armed for self-defense. Oregon is an “open carry” state, meaning that most people are allowed to carry firearms openly without a permit.

The determination to defend the last Black family in the Albina appears to have paid off.

KGW News reported Dec. 10 that the developer who bought the Red House is willing to sell it back to the Kinneys at cost. As of Dec. 11, a GoFundMe campaign had raised over $280,000 — enough for the Kinneys to buy back their home under such a deal. The developer seems to be responding to public pressure — but has not yet directly contacted the family.

According to a Dec. 14 statement by the Kinney family, Portland’s Mayor Ted Wheeler has had to back down on his threat to use cops to evict the family by force. The family has demanded and received a public apology from Wheeler for harm caused to the family and for “the emotional violence caused by evictions against Black and Indigenous families.”

The statement conveys firmly that, as the family has not yet secured their home, supporters would still be present, defending them and the house.

Lyn Neeley contributed to this article.