The number of deaths in local jails as documented by Reuters, along with data collected by The Marshall Project and the New York Times on state and federal prisons, clearly illustrates that these various cages are concentration camps. People are dying premature and unnecessary deaths there, in disproportionate numbers for people of color and for people with various intersections based on nationality, gender, sexual orientation and disability. 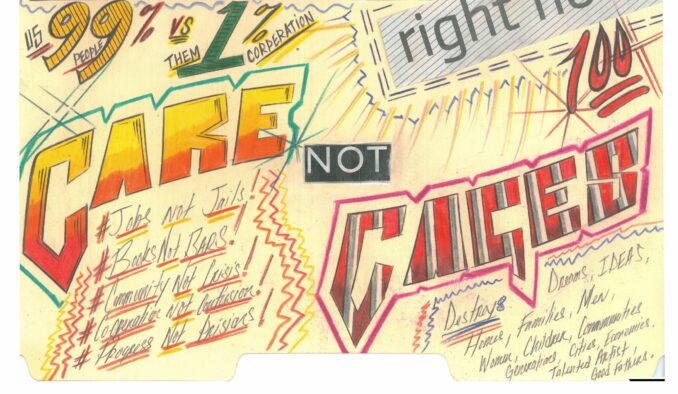 From Care Not Cages: A People’s Guide to Healing – a 2018 zine and video series featuring incarcerated artists dreamt up by Decarcerate Alameda County and Prison Renaissance.

These deaths, particularly in U.S. jails, are being undercounted for many reasons. Jail facilities transfer incarcerated workers to outside medical facilities before they die so their deaths won’t be counted as happening in custody. There are “compassionate releases” where folks who have been locked up and are terminally ill will die in their own communities rather than in the damning custody of municipal, county, state and federal agencies.

Data on deaths in local jails is also difficult to capture, due in part to the decentralization of incarceration within county and municipal structures. Jails are operated by county sheriff departments and other law enforcement agencies, such as city police departments.

People with longer sentences are generally transferred from local jails to prisons, which are complexes usually operated by state and federal agencies. Legislation relating to prisons is frequently put in place at both the state and federal level with the intent to suppress data and maintain secrecy – for a state that serves the ruling class rather than the workers who produce its great wealth.

Overall, data is made hard to collect on the number of deaths in jails – but also in im/migrant detention centers and prisons – to intentionally erase the criminalization of human beings from public life and public responsibility. This erasure happens to everyone’s detriment – except the rich.

An Oct. 16 article from Reuters reveals the suppression of data on jail deaths: “The Justice Department’s Bureau of Justice Statistics has collected inmate mortality data for two decades – but statistics for individual jails are withheld from the public, government officials and oversight agencies under a 1984 law limiting the release of BJS data. … Local policy makers can’t learn if their jails’ death rates are higher than those in similar communities… The Justice Department’s own lawyers, charged with taking legal action when corrections facilities violate constitutional standards, can’t readily identify jails where high death counts warrant federal investigation.”

How and why are people dying in jail?

A Reuters analysis of deaths in 523 jails across the U.S. between 2008 and 2019 found 7,571 reported deaths. Of the people who died in these cages, 4,998 – or about two thirds – were killed by conditions they were already suffering from before they were in custody or saw their day in court.

Of the total number of reported deaths, 2,000 were due to suicide. About 1,500 of those suicides were by people not yet convicted of anything. There are essentially no figures available on the number of deaths resulting from guard or police assault on incarcerated people within jail and prisons.

A myriad of deplorable factors continue to contribute to premature death imposed on already vulnerable people. Many jails are not responsible to any agency to maintain basic, safe standards for operation or healthcare. Mandatory bail requirements trap poorer people in pre-trial detention for long periods.

Since the end of the Reuters study, the death rate for incarcerated people due to drug and alcohol overdose has increased by 72%. This has occurred amid an opioid epidemic developed and exploited by a pharmaceutical industry determined to reap mega-profits and by complicit government entities.

Incarceration should not be a death sentence

Im/migrant detention centers, jails and prisons are consistently used as weapons against members of the working class and against oppressed people. Arrest and incarceration can be used against anyone at any time for the most arbitrary of reasons.

Threats of these cages can be invoked to bust up and contain revolutionary movements fighting for a world free of cages and borders – a world that will not produce violence in the name of profit for a ruling class that holds the keys to these cages.

Those of us on the outside will not allow the prison walls to divide us from our common interest in fighting together with incarcerated workers for a planet free of the organized violence of police and prisons, a world free of the willfully imposed poverty and everyday violence of capitalism.

Save their lives and free them all for public health! Provide released folks with housing, healthcare and a guaranteed income upon release! Attack the conditions that necessitate cages! Tear down the walls!