The Oct. 26 police killing of Walter Wallace Jr. in Philadelphia was caught on a video that went viral, bringing thousands into the streets to demand justice for the 27-year-old Black man, who had been experiencing a mental health crisis. Despite a series of 911 callers saying Wallace needed an ambulance and two previous police visits where they were made aware of Wallace’s condition, the final response was by two police officers who fired 14 shots at Wallace within minutes of their arrival. 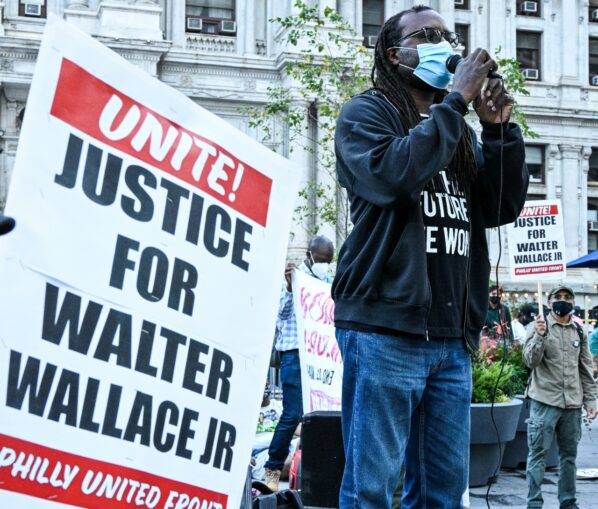 On Nov. 4, one day after the election, the city released police bodycam footage of Wallace’s killing by officers Thomas Munz Jr. and Sean Matarazzo, both in their 20s. The Wallace family had been shown the video days before it was made public.  In the footage, one of the officers can be clearly heard saying “Shoot him” before both officers fired.

The Black Philly Radical Collective called a protest to disclose the officers’ names and denounce the city’s delay in releasing the footage. They gathered on one side of City Hall, while demonstrators demanding that every vote be counted in the presidential election amassed on the other side. Eventually both demonstrations merged.

The 911 dispatch recordings that brought Munz and Matarazzo to the scene made no mention of Wallace’s mental health history or the two earlier police responses. In the bodycam footage, Wallace, who had a knife, appears to be walking aimlessly rather than aggressively. His mother and two neighbors are yelling at the police not to shoot.

Members of the Wallace family, their attorney Shaka Johnson and Gwen Carr, the mother of Eric Garner, spoke out at a press conference Nov. 6. Garner was killed by New York police in July 2014. His final words, like George Floyd’s, were “I can’t breathe,” and his case was a milestone in the Black Lives Matter movement.

Failure to follow 2015 Department of Justice call for reforms

While not calling for charges to be brought against the two officers, the Wallace family is demanding they be fired. Johnson criticized the Philadelphia Police Department for failing to implement reforms and training recommendations made in a 2015 U.S. Department of Justice report. The report, requested in 2013 by then Police Commissioner Charles Ramsey, identified “serious deficiencies in the department’s use-of-force policies and training, including a failure to maintain a certified field training program; deficient, inconsistent supervision and operational control of officer-involved shooting investigations and crime scenes.”

While the DOJ report applied to the entire Philadelphia police department, it named police districts where civilian complaints of brutality were particularly high — including the 18th district where Munz and Matarazzo are currently employed.

Johnson and other speakers called for all police to be armed with Tasers and for a change in the way the city responds to mental health crises. However, even with reforms like mandatory bodycam use implemented, it has not changed the “shoot him” mentality of racist police officers.

Gwen Carr noted that while she had learned of her son’s death in a phone call, Wallace’s parents had the horror of witnessing his killing. “Can you imagine, just imagine, what trauma they went through seeing their son murdered right in front of their eyes? There are thousands of mentally ill people [who] are getting gunned down every day because the police are the first responders. This has to stop.” (Philly.com, Nov. 7)

In addition to support from Carr, other parents of victims of police violence visited with the Wallace family to offer support. They included Samaria Rice, whose 12-year-old son Tamir Rice was gunned down by Cleveland police Nov. 22, 2014, and Lisa Simpson, whose 18-year-old son Richard Risher was fatally shot by police in Los Angeles July 25, 2016.

A rank-and-file caucus of AFSCME District Council 33 and DC 47 issued a statement calling on Philadelphia Mayor Jim Kenney and the City Council to immediately defund the Philadelphia Police Department by at least half — $364 million — with the money to go instead to fund public services, including mental health. Wallace’s father is a 33-year veteran of the city’s Streets Department.

Several hundred people attended the funeral for Wallace Nov. 7. All Wallace’s nine children including his infant daughter, born just days after he was murdered, were there. In his obituary, Wallace was remembered as “a handyman who would try to fix almost anything, he was dependable and an avid learner.”

The family wrote: “We never saw Walt having a disability. We saw the man who fought through it and did so with his best ability.” (Philly.com, Nov. 8)