The following are brief excerpts from a small sample of commentaries on the U.S. elections written by revolutionaries and anti-imperialists on three continents just before the U.S. corporate media declared the Biden/Harris ticket the winner. – John Catalinotto, Workers World managing editor. 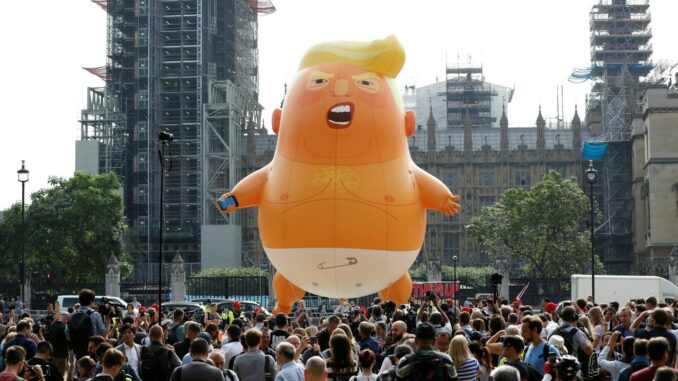 The human rights organization #Africa4Palestine, together with the South African Peace Initiative (SAPI) and our partners, observe with concern the unravelling of the electoral process in the troubled, oil-rich, nuclear-armed, North American nation of the USA.

We join other NGOs and Africans in calling for people of both sides to practice restraint, while they await the outcome of the vote counting. We join all peace-loving peoples of the world in condemning recent incidents of incitement, violence and intimidation against voters by members and supporters of the ruling Republican Party.

We note that businesses and stores in the USA capital, Washington DC, are boarded up and that streets are abandoned amidst growing tension and fear gripping the troubled and disease-ridden country. We unequivocally condemn reports of armed militia, who back the embattled president, roaming the streets and interfering with voting processes.

We condemn the pronouncements by the unhinged USA President Donald Trump of declaring both victory (and fraud simultaneously), even before all votes were counted.

We are also extremely concerned by the dire humanitarian situation, exasperated in recent months due to Covid-19 in the crisis-wrecked USA. We support the call for humanitarian aid organisations, charities and the international community to do more to protect the civilian population of the USA, particularly vulnerable women and children in this male-dominated and patriarchal society.

We call for an urgent meeting of the United Nations Security Council (UNSC) to discuss the worsening tensions in the volatile, strategically located Western nation and to take firm measures to secure the country’s nuclear and chemical weapons stockpiles until stability is restored and the will of the American people is respected. If the UN must intervene militarily, including imposing a no-fly zone, then so be it.

Like many others in the Global South and civilized world, we make ourselves available to restore and rebuild democracy in the USA, for the people of the USA.

Published Nov. 7 in avante.pt, newspaper of the Portuguese Communist Party.

The election of Trump in 2016 reflected the decadence of the United States. His presidency has accentuated that decadence. The social crisis has worsened for years. Most of the people of the greatest capitalist power live in poverty, even if they have a job. At the same time, the ruling class accumulates obscene wealth.

Inequalities have reached unprecedented levels for many decades. The disaster of COVID-19 in the U.S. reflects Trump’s disdain and attempt at anti-China politicization of the epidemic. But it reflects much more than that: the absence of a national health service and basic labor rights such as sick leave and glaring levels of poverty.

The election of Trump in 2016, like the election of Obama in 2008, was due in part to deep discontent and a desire for change. Many believed [Trump’s] false anti-system discourse, the proclamations about “draining the swamp,” the false promises to put an end to military adventures.

Of course, the reality was quite different. Underneath the radical nature of the anti-system discourse was hidden a candidate of the system, who fattened big business even more and who openly nurtures fascist and racist forces and unrestrained police violence to impose submission domestically.

On the contrary, U.S. external aggressiveness has not diminished, as can be seen in Iran, Venezuela, Bolivia, Palestine, Cuba, Syria, Yemen, or Belarus. The campaign against China, “guilty” of its economic and social development and growing role in the world, is leading the planet into a crisis that could have dramatic outcomes.

The violent clashes between sectors of the U.S. ruling class focus on how to halt decay and maintain Washington’s dominant position in the world. Trump bets on generalized confrontation, including with U.S. allies, to impose submission. He has recorded successes in the subordination of the European Union.

He is preparing a major clash with China. But Trump’s rise has been fuelled by decades of war, crime and violence, including the wars against Syria and Libya, the coup by Ukrainian fascists, the siege of Venezuela and the confrontation with Russia, unleashed under Obama, with Biden as his vice president. These policies will essentially continue [whoever wins], because these are the policies of the system.

In electoral competition both Republicans and Democrats tend to widen the political and style differences of candidates, seeking to win the electorate of that country of 332 million people. In the end, there are more similarities than differences. Both defend the economic system dominated by Wall Street, banks, investment funds, Silicon Valley, multinationals and international financial organizations where the U.S. vote weighs more than any other.

A Democrat started the blockade of Cuba, John F. Kennedy, and other Republicans tightened it, like Bush and Trump. The Democrat Barack Obama declared Venezuela a serious danger for U.S. security in 2015 and the neo-Nazi that today inhabits the Oval Office continued with the line of blockade, aggressions and even the project of military invasion.

In any case, with these and many other policies [in which the two parties] coincide, it is incorrect to say that Trump and Biden “are the same.”

Regarding the pandemic, Trump was criminal, minimizing it, without adopting health measures and accusing China of having manufactured and exported the coronavirus. In good measure, that is why today the U.S. has 9 million infections and more than 230,000 deaths, while the demonized Cuba and Venezuela regret only 129 and 810 deaths.

As in the rest of the world, the pandemic is linked to negative economic and social consequences. The U.S. has always had 40 million poor people, the result of the Republican-Democratic capitalist system of yesteryear. And with the Covid-19, another 25 million joined in, seeking unemployment benefits and state aid.

[Trump] even declared that he would not accept the results, that is to say, he would stay in the White House in anticipation. That would be a flagrant crime, but also an incitement to violence, in a country that is violent outside, like the sheriff of the world, and also violent inside, especially against the poor, African Americans, Latinos, Indians and women.

With incomplete recounts and denunciations, today it is not known who won; it is easier to venture who lost, the U.S. population.

Trump, Biden and the U.S. elections

When the incumbent U.S. president declared that he had won the election, but that it was rigged, which is why he will have any lengthy counting stopped by the courts, he once again changed the structure of the U.S. state system to make it recognizable. Billionaires like him don’t even bother with a façade democracy, but instead they throw a political party with all the trimmings: vulgarity, criminal energy, enjoyment of dissipation, habitual corruption, infantile me-me shouting, including state-terrorist assassination attempts and a robust armament program. Trump may not have started a great war, but he did everything he could to make future wars “great again.”

A President Joseph Biden will probably slow down the [U.S.] decline, but nothing is certain. After all, for almost 50 years he was one of the people high up in Washington who helped to bring the United States into the impasse in which up to recently the “only superpower” today finds itself.

Will Trump attempt a power grab with the help of the Supreme Court?

Statement published Nov. 3 at initiative-communiste.fr/, monthly magazine of the Pole of Communist Revival in France.

No one can believe for a second that Joe Biden, the great “Democrat” who dreams no less than the fascistic Trump of taking on Castro, Maduro and Putin, is the awful “communist” who populates the nocturnal fantasies of the increasingly fascistic “Republican” militants. However, the testimonies of the comrades from the USA who reach us show that the situation in this country is so explosive, and the class struggle there lacks even more than here the means of its frank and direct expression, [that] a violent outburst is by no means to be excluded in the “world’s greatest democracy.”

And meanwhile, Americans continue to die like flies from Covid 19. While there is one U.S. resident for every 23 people on Earth, one out of every 4.5 Covid deaths is from the United States. … A dreadful record of health problems that cannot be compared, either remotely or closely, to that of China, not to mention the record of Cuba or Venezuela, both of which are under an American blockade.

If there is one thing that is certain, it is that the openly pro-fascist Trump, the current President of the United States of America, is a clear loser at the ballot box in the American general elections that are drawing to a close. This is obviously not a surprise. Not that the candidate nominated by the Democratic Party leadership after a completely unfair “primary” process — which once again discarded the most progressive candidate of Bernie Sanders — raises popular enthusiasm.

Let us also recall at the international level that Biden, Obama’s right-hand man in every sense of the word, makes no secret of his intention to continue his ambitious warfare program and to step up the imperialist wars waged by Washington against the peoples who dare to claim sovereignty and a multi-polar world, and above all against progressive and socialist countries such as Cuba, Venezuela, Bolivia, China and North Korea.

While there is nothing to be expected from the U.S. elections on the international level, since Trump and Biden are only two sides of the same imperialist war policy, the danger of an openly fascist overthrow in the short term should not be underestimated in a U.S. brought to the point of ignition by the systemic crisis of capitalism.

This election remains in fact marked by the daily decline of the hegemon, which wanted to be bigger than it really is. The capitalist U.S., the dominant imperialists, is a tragic drama for which all workers, Black workers in particular, pay the price.