In the previous 56 years, the U.S. government had executed just three prisoners. But in 2020, seven federal executions have already taken place since July.

The most recent was Christopher Vialva, put to death Sept. 24 at the federal prison in Terra Haute, Ind. He was the first Black prisoner executed as part of the Trump administration’s resumption of federal executions after a nearly 20-year pause.

Several families of men on death row protested the two executions during the week of Sept. 21, in Washington, D.C., and outside the prison in Terra Haute. Rodrick and Wana Reed traveled from Bastrop, Texas, to be with the families of the two men about to be murdered. Rodrick Reed, brother of Texas death row prisoner Rodney Reed, said it was time for families and those who want to stop all executions to get together to fight. 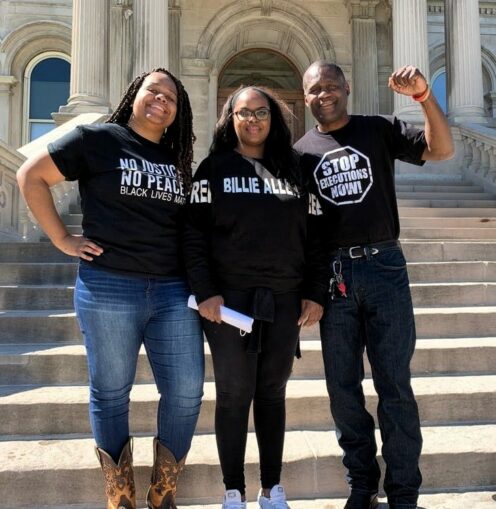 Fighting for an innocent loved one on death row can be a full time job. Here at the Dept. of Justice, Washington, D.C., the week of Sept. 21 are Eve Allen (middle) is working to free her brother, Billy Allen, from federal death row, and Wana and Rodrick Reed for Rodrick’s brother, Rodney Reed, from Texas death row.

Joining them was Delia Perez Meyer of Austin, Texas, the sister of Louis Castro Perez, who has spent decades working to prove her brother’s innocence. Eve Allen, the sister of Billie Allen, who is on federal death row, traveled to Terra Haute as well. She proclaims her brother is an artist, an author and innocent. (FreeBillyAllen.com)

The issue of racism in the criminal justice system has been out front in the public view following George Floyd’s murder by a Minneapolis police officer in May, resulting in outrage and demonstrations across the country.

According to DPIC, of the 56 inmates currently on federal death row, 26 are Black– almost half–while Black people make up only about 13% of the U.S. population.

No more federal executions are presently scheduled, though the Department of Justice could change that at any time. There is one more state execution set for 2020—Purvis Payne, a man on Tennessee’s death row. Payne may be both innocent and intellectually disabled.

African American leaders in Tennessee are urging the governor and the courts to stop Payne’s execution. State legislators, legal associations, religious leaders and community activists are demanding DNA testing. Their appeal includes postponement of the Dec. 3 execution date so the Tennessee legislature can amend state law with a procedure for death row prisoners to establish they are mentally disabled and ineligible for the death penalty.

Since the 1970s, there have been 1,526 executions in the U.S. The vast majority have taken place in the former enslaving Confederate states of the South—1,245. Texas led in legal lynchings with 570.

But executions have continued to decline over the last 20 years. Fourteen executions have taken place in 2020, half by the federal government. Texas has enforced three this year and there has been one execution each in Missouri, Georgia, Alabama and Tennessee. According to the DPIC, “The national death-row population has declined for 18 consecutive years, as sentence reversals, executions and deaths by other causes are outpacing new death sentences.”

The criminal so-called “justice” system can never be reformed. It needs to be abolished, along with the cops and the courts and the prisons. Until that day, activists can win some victories, abolitionists can chip away at the death penalty, and transitional demands can be made and won.

But for the 2,500 men and women now on state and federal death rows, the only solution is abolition of the death penalty.