These protests were part of Fridays for the Future, which began with massive turnouts a year ago to the day. Numbers this year were impacted by the COVID-19 pandemic. In some countries, gatherings are limited to 50 people. In some German cities where COVID-19 is spiking, governments forbid gatherings of any size.

But there were still protests and school walkouts in almost every major European city and many smaller ones. Where schools are totally virtual, school walkouts didn’t physically take place, but other social media outlets were used. There was a 24-hour Zoom call, which let activists speak about local issues and their relationship to the climate crisis.

Some groups participating in Fridays for the Future, notably the British group Extinction Rebellion (XR), explicitly linked their struggle to achieve environmental justice to supporting the struggle to make Black Lives Matter. In the U.S., a broad coalition called StrikeWithUs also explicitly linked environmental justice to the movement for Black lives.

In the Philippines, marchers raised the issue of imperialist exploitation of the country and its mineral wealth. Protests highlighted the way laws against terrorism are used to outlaw protests. Mitzi Jonelle Tan, an activist, told the Guardian (Sept. 25): “We Filipinos are among the most impacted [by climate crisis], ranking second in the latest global climate risk index, yet our contributions to greenhouse gas emissions are so little.”

In India, where the poorest workers have to do heavy work outside in the heat of the day, protesters emphasized the possibility of hundreds of thousands of people dying from the heat, if global warming continues to rise at current rates. 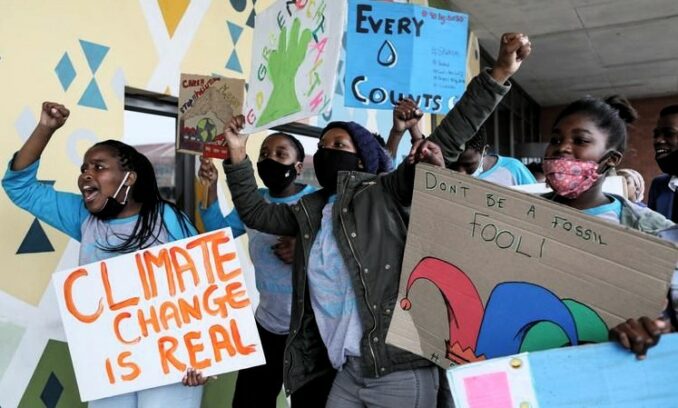 In the cities of Nairobi to the east, Cape Town to the south and Lagos to the west, there were big marches highlighting the climate changes which are inundating Africa. All across the Sahel, the southern edge of the Sahara desert, there is currently major flooding in an area generally threatened with drought. Hundreds of thousands of people have lost their homes, and much of the crops awaiting harvest has been destroyed. These floods are threatening nations from Mauritania to South Sudan with famine.

The world’s changing weather is creating greater problems. The inundations in the Sahel, a windstorm in Alaska of hurricane-force strength, a record number of Atlantic hurricanes, forest fires devastating vast areas in the western U.S., heat waves of 100 degrees in Siberia, a record ice loss in the Arctic ocean — all point to the climate crisis growing ever more deadly.

The youth of the world see their future evaporating. As they say, “There is no planet B.” More and more, their signs and banners proclaim the need for a system change to combat climate change.