As of Sept. 13, at least 100 wildfires are raging in ten U.S. states. The situation could not be more dire. 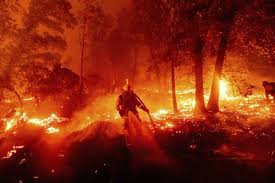 The Idanha-Detroit RFPD Facebook site described the scene: “Due to Highway 22 being blocked on both ends of the district by boulders and downed burning trees, we called in the National Guard for an air evacuation, but they were unable to land due to high winds and heavy smoke.

“We had approximately 70 civilians staged at Mongold [Detroit Lake State Park, Ore.]. We were preparing to move people to the docks for a ‘last stand,’ but the Forest Service was able to find an evacuation route up to Government Camp using forest roads.” (tinyurl.com/y55jshdh)

How could this have happened in the United States, supposedly a world-leading economy? Because the U.S. ruling class prioritizes racialized capitalism over human life.

Climate change — the bill comes due

Much of the wealth and power in the U.S. accumulated as burning fossil fuels warmed the planet and caused anthropogenic climate change. As annual average temperatures rose, especially in the Pacific Northwest, forests grew drier. Weather patterns and ecosystems were disrupted, and fragile biomes like the temperate forests were primed for conflagration.

Land misuse has added to the impact of climate change, especially in Oregon where vineyards, livestock and marijuana farms have depleted the water table and desiccated the lands now burning.

Lack of rain, depleted groundwater, increased lightning and strained resources for emergency management all compound to threaten the lives of the working class and the oppressed.

40% of fire responders are incarcerated workers

Wildfires are incinerating communities, and forestry workers are stretched thin. Yet, we see nothing like the militarized mobilizations let loose against protests for Black lives. Instead, like Hurricane Katrina or the COVID-19 pandemic, the response is to profiteer, blame and deny, rather than address the problem.

Evacuees stay in temporary shelters, as vacant homes and workplaces burn. Workers receive no financial support. In California, 4,000 incarcerated workers paid only a dollar an hour make up 40% of the fire responders. These imprisoned workers risk their lives in prison slavery conditions, including battling widespread COVID-19. Air quality verges on unsurvivable, especially for people with respiratory disabilities, and as ever U.S. health care is racist and unaccessible.

In some cases, a nonresponse would be better than the actions of local law enforcement. In Butte County, Calif., the sheriff declined to issue an evacuation order until it was too late to warn many residents. Clearly, law enforcement is not an institution for public safety. (tinyurl.com/y54kzk6v)

Idanha-Detroit evacuees were sent to Clackamas County, where deputies, rather than responding, blamed “antifa” for starting fires. (tinyurl.com/y2ebksk9) The U.S. failed state can respond to crises only by provoking violence against those most directly harmed by its own failures.

While the land now burning is under the U.S. flag, it was not historically so. After the U.S. forcibly seized its current territorial holdings as part of a centuries-long, settler colonial campaign of genocide against Indigenous peoples and cultures, it forcibly ended the application of proven and effective Indigenous techniques for fire management.

The Wildland Fire Program of the Karuk Tribe states: “Prescribed burning is an ancestral cultural practice that has taken place for thousands of years to manage the landscape, to stimulate the production of resources for humans and for animals, to prevent catastrophic wildfires, and to provide for species abundance and diversity. The euro-american invasion has since disrupted cultural fire practices with (among other injustices) fire suppression policies.” (tinyurl.com/y5452o3t)

The United States Forest Service (USFS) entered into partnership with the Karuk Tribe in 2013 and reported on the results in 2018. In the executive summary of this program, forestry workers came to much the same radical solution as Indigenous activists: land restoration. Their report said that “in the long-run, tribes should be included in comprehensive, long-term land management plans [and] identify lands where there are tribal rights and interests in need of restoration.”

Notably the Red Salmon fire, on lands stolen from and now partially managed by the Karuk Tribe, has been vastly more contained than the nearby August Complex fires in Northern California.

Centering Indigenous knowledge and expertise, while prioritizing human lives over profits, would immediately address many of the worst problems. Food, shelter and relief payments to displaced evacuees, full funding of forestry workers and Indigenous land restoration — just a stroke of a pen for those in power — would save thousands of lives.

calvin deutschbein is a member of the Durham Branch of Workers World Party. In 2013, the neighborhood where they grew up on the slopes of Cheyenne Mountain, Colo., was burned down in an uncontrolled wildfire. deutschbein is a former forest ranger of the Eagle-Holy Cross Ranger District of White River National Forest in eastern Colorado.