If you are a person of color, you too, like me, are probably traumatized and fed up with reading article after article that states: “Black and Brown people are especially affected by the coronavirus.”

Substitute “coronavirus” with most diseases or other dire social conditions such as unemployment, gentrification, hunger or broader social calamities such as climate change — and there too, people of color will be the most impacted. 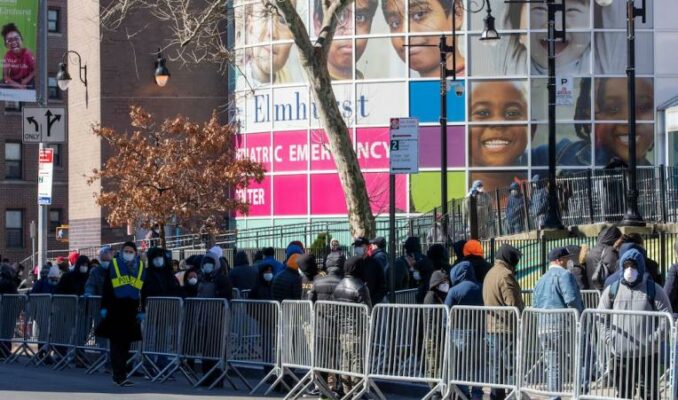 People line up outside Elmhurst Hospital Center in Queens to be tested for the coronavirus.

In other words, people of color bear the brunt of every single damn capitalist calamity.

COVID-19 has exposed the fact that the current global infrastructure of capitalism — which the majority of the people live under — is not only incapable of addressing the pandemic, it is aggravating it.

On May 3, the United Nations Deputy Secretary General Amina Mohammed stated: “COVID-19 is a threat multiplier. We have a health emergency, a humanitarian emergency and now a development emergency. These emergencies are compounding existing inequalities. In advanced economies, we are seeing higher rates of mortality among already marginalized groups. And in developing countries, the crisis will hit vulnerable populations even harder.

“Weak health systems won’t be able to cope. Incomplete social protection systems risk seeing millions fall back into poverty. And governments with little economic firepower will not be able to cushion the impacts or recover quickly. Every single person will be affected by this pandemic.” (news.un.org)

Every single person yes, but people of color will be hit the hardest.

Early on in the pandemic, news service Vox wrote: “with every day that goes by, it becomes clearer that the virus isn’t an equalizer at all. Instead, it is exacerbating the inequalities . . . taking a disproportionate toll on low-income people, people of color and others . . . already marginalized before the crisis.” (April 10)

Interestingly, if it were not for independent academic research, the official Centers for Disease Control tally would not be calculating the effects on people of color correctly.

Thank goodness for the nerds.

According to the Center for Disease Research and Policy, a Harvard University study concluded that “the CDC’s weighted population distributions underestimate the excess burden of COVID-19 among Blacks and Latinos.” (July 28)

This burden is substantiated by many laudable studies.

For example, Dr. Sherita Hill Gordon from Johns Hopkins University writes on that website: “People of color, particularly African Americans, are experiencing more serious illness and death due to COVID-19 than white people.”

Furthermore, “residents of mostly nonwhite communities died of the coronavirus at nine times the rate of residents of largely white areas.” (July 28)

These conditions — along with the police terror that continues unabated — has resulted in the medical profession determining for the very first time that racism is a public health problem.

A statement issued by the National Nurses United asserts “we all have a responsibility to understand and root out the racism in our systems and institutions that are driving these disparities.” (nnu.org, June 1)

Early in the pandemic, the neighborhood of Jackson Heights in Queens, New York, was hit hard. This is a beautiful, primarily immigrant and Black and Brown neighborhood, notwithstanding recent gentrification. In fact, it’s been noted as the most diverse place on earth. (Daily News, July 12, 2009)

In a May 18 Opinion piece in the New York Times, Ed Morales said, “Elmhurst and Corona Queens had its hospital quickly overwhelmed as an early epicenter of the coronavirus, and its residents live in ceaseless anxiety.

“Undocumented immigrants in the community don’t want to risk getting emergency care for fear of exposing their status. Roosevelt Avenue, with its chain of restaurants, inexpensive stores and nightlife haunts, turned into a dark, lonely promenade of sorrow and is likely to find it harder to recover than more affluent parts of the city.”

Congresswoman Alexandria Ocasio-Cortez, representing sections of Queens and the Bronx, said at the time that the pandemic “is not really creating new problems. It’s pouring gasoline on existing ones.” (NYTimes, May 4)

Does it not make sense to conclude that Donald Trump, who campaigned on a vile racist program, could care less if more people of color died than whites from COVID?

In fact, the Atlantic magazine headlined on May 8: “The Coronavirus Was an Emergency Until Trump Found Out Who Was Dying.”

That article continued, “The lives of disproportionately black and brown workers are being sacrificed to fuel the engine of a faltering economy, by a president who disdains them. This is the COVID contract.”

In his Opinion piece, Morales noted that the first Latinx to die from the virus was a Salvadoran worker at a Smithfield meatpacking plant in South Dakota. Black folks in the South know well the horrors of working at Smithfield, founded in Virginia in 1936, now the largest pork producer in the world.

Fast forward to the Republican National Convention defiantly held in North Carolina at the height of the pandemic. The convention was a complete backlash to the righteous actions in the streets against police terror.

The RNC gave message after message to the oppressed that if COVID-19 doesn’t kill you, Trump’s cops will.

It is notable that, at the moment, a key “advisor” to Trump about COVID is Scott Atlas. He has no scientific or epidemiological background, but he does have Trump’s ear.

According to a Truthout article on Aug. 31, Atlas is “pushing a ‘herd immunity’ approach to the pandemic, which would allow the virus to spread nearly unmitigated through the population while protecting nursing homes and others. . . . Building herd immunity in this way is an extremely controversial strategy and has been condemned by epidemiologists and the World Health Organization.”

William Hanage, a Harvard professor of epidemiology of infectious disease, wrote in the Guardian on March 15 that herd immunity as a coronavirus policy is like letting a house burn down without trying to fight the fire. Hanage states, “The government has inexplicably chosen to encourage the flames, in the misguided notion that somehow they will be able to control them.”

The logic of racist capitalism is: If it is mainly people of color dying from the virus, if it is mainly warehouse and grocery workers, custodial workers, nurses, farmworkers or bus drivers, why not let the fire spread?

The oppressed in this country have experienced centuries of abuse and violence. But we have also forced capitalism to concede to our demands many times.

With COVID-19 and the many other calamities that the working class faces at this very moment, an opportunity arises.

White workers, especially youth, are seeing for themselves that this rotten capitalist system has destroyed their future. They have no stake in this system and look elsewhere for answers, socialism for one.

They are solidly behind the movement for Black Lives Matter.

They agree that migrants have a right to be in this country.

The unity of oppressed and white workers has the potential like never before to make demands that will not just wring a concession from the 1%, but win a complete abolishment of their system.

This is an urgent task. The movement for fundamental change cannot wait until genocide reaches the communities of color. It is already too close.