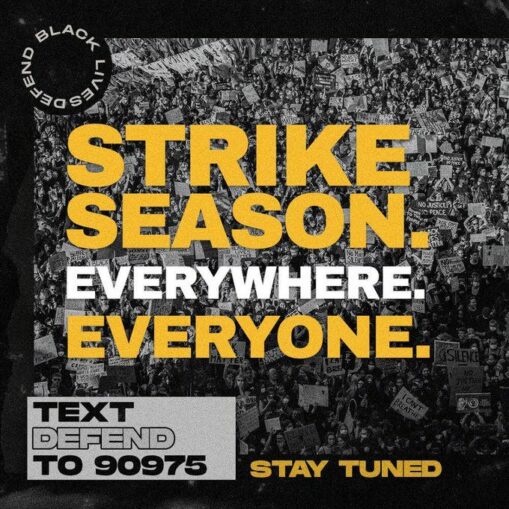 While no actions have as yet been announced, the appeal by such a broad grouping of unions to masses of organized and unoganized workers to wage political strikes against police violence and white supremacist terror is a huge step forward.

Last week’s actions by professional athletes in the NBA, WNBA, NFL, MLB, and professional tennis are a call to action for all of the labor movement.

They remind us that when we strike to withhold our labor, we have the power to bring an unjust status quo to a grinding halt. The status quo – of police killing Black people, of armed white nationalists killing demonstrators, of millions sick and increasingly desperate – is clearly unjust, and it cannot continue.

As unions representing millions of workers across the country, we stand in solidarity with our comrades on the courts, on the fields, and in the streets. We echo the call to local and federal government to divest from the police, to redistribute the stolen wealth of the billionaire class, and to invest in what our people need to live in peace, dignity, and abundance: universal health care and housing, public jobs programs and cash assistance, and safe working conditions.

Progressive labor leaders stood with the Civil Rights Movement in the 1960s. We have a long history of supporting the Black Freedom Movement and we will not stop now. The labor movement and the Movement for Black Lives are each other’s keepers, and we are ready to work together to do what we must to win justice for our people.

We support the demands for racial justice echoing throughout this nation, and the simultaneous call for a more just economy. We will use our strength and influence to make sure organized labor is on the right side of history in this moment.