Getting enough food was hard for people working low-wage jobs before the pandemic. Now it’s harder, given the huge increase in unemployment — 29 million jobless workers now live off meager unemployment insurance. Millions without work are getting nothing, and more than 50 million people are “food insecure,” meaning they lack adequate food to live active, healthy lives. 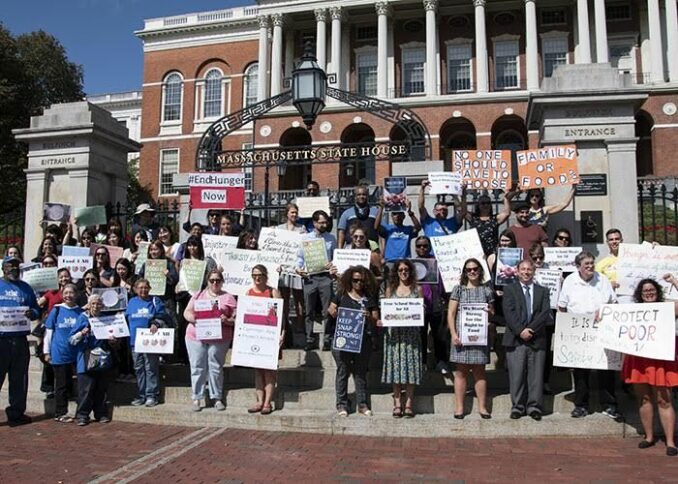 Despite this grim news for the working class, the stock market has boomed to nearly record heights, which gives a false picture of a vibrant economy, as did the report that the U.S. economy added 1.4 million jobs in August.

Based on Census Bureau and other government data, the organization Feeding America estimates that as many as 54 million people in the U.S. are food insecure, up from 37 million in 2018. (tinyurl.com/yx8hfn7a) It estimates the number of children separately, because in a significant number of families the adults go without food so the kids will get enough to eat. At least 14 million children in the United States are “food insecure.”

A Brookings Institute study (July 9) estimates that unemployment is responsible for about 65% of food insecurity. From the pictures displayed when you search Google for images of hunger in the U.S., many of the hungry are Black or Latinx.

The U.S. government’s $92 billion in 2019 in food assistance was by no means enough. About one out of seven U.S. families uses food banks to supply some of their food. The Houston Food Bank estimated that 1.1 million people in the 17 counties around Houston in its service area were food insecure in 2019. During the pandemic, this grew to 2.45 million people. Private food banks and pantries exist in almost every part of the United States.

Some 5,000 Meals on Wheels programs supplied 7 million seniors with hot meals.  Seniors are especially vulnerable to food insecurity. Due to the threat of COVID-19, many seniors are forced to rely on food delivery services, which are expensive and offer limited selections.

In the August job numbers, a big part of the job gain was hiring short-term Census workers. The reports of the official unemployment rate falling and the Federal Reserve keeping interest rates low helped to pump up the stock market.

This official unemployment rate, known as the U-3 rate, which the Bureau of Labor Statistics reports monthly, often hides real, negative developments in the economy. Nevertheless, it gets all the headlines and attention from politicians. They often use this rate to justify expanding or contracting all sorts of benefits.

For August 2020, the U-3 rate was 8.4%, which was a significant improvement from July, when it was 10.2%. The BLS publishes other rates, often ignored in the media, which reveal more about problems with unemployment.

For example, if workers have had their hours cut or have stopped looking for a job because they know none are available near where they live, this is excluded from the U-3 rate. The BLS reports an alternate figure that reflects these other kinds of job losses, called the U-6 rate, which currently is 14.2%.

The number of these claims and other data on retail sales indicate that the boost to the economy from March’s CARES-1 benefits package — that ended on July 31 — is drying up. This threatens more economic decline and more hunger.