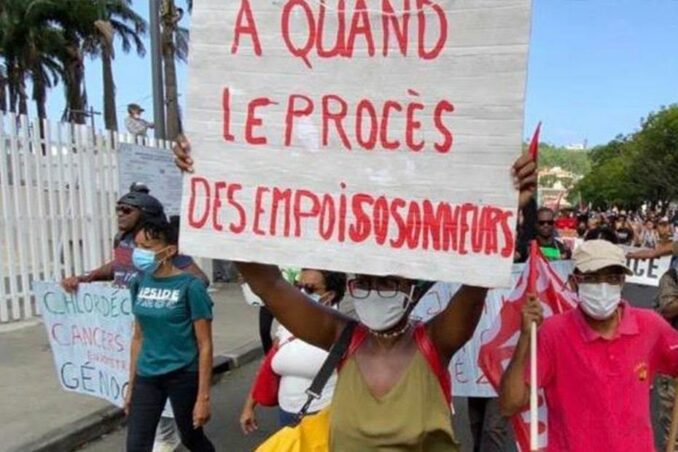 Currently in Martinique, there is unrest and anger over the use of a pesticide linked to cancer, called chlordecone. For nearly two decades, this chemical was sprayed over the banana crops of the islands, and now nearly every one of the local residents have traces of it in their blood. (tinyurl.com/y3cxsyqa)

French President Emmanuel Macron has appeared to be outspoken in calling this an “environmental scandal,” and he claims that the French state will take responsibility immediately. However, one must ask: If this were a known carcinogenic chemical, why was it allowed to be used in the first place on crops tended to by the working peoples of Martinique? After all, it was the French Minister of Agriculture, Jacques Chirac, who allowed the use of the chemical in 1972, despite it being recognized as hazardous.

The answer is simple: The cruel and cold hand of imperialism decided the health of the citizens of Martinique was worth risking, if using this pesticide would save costs and increase profits. Were this not the case, Macron would not have to claim “responsibility” for such a “scandal,” for there would be no scandal at all.

For all their progressive talk, France is still a country steeply involved in the exploitation of less developed countries. As a Vietnamese socialist, I cannot help but feel much empathy for those affected by this chemical used on the banana plantations.

Cruelty from French imperialism is something my people can understand on a deep level. Similar to the choices made today in Martinique by French neocolonialism, French rule in Vietnam was motivated by profit, with no care for the health or safety of the colonized. Vietnamese peasant workers were called a derogatory term for Asian laborers and were forced to work on rice plantations in terrible conditions that led to sickness and death on a daily basis.

Corporal punishment, outlawed by French colonial rule, was still used by the overseers on my people. It is easy to see a similarity between this and the use of chlordecone on the plantations and peoples of Martinique, despite the pesticide being recognized internationally as a carcinogenic chemical.

What then are we as Marxists supposed to take away from this? Imperialism is alive and well in the 21st century, and we must continue to oppose it just like our predecessors did in the past. Whether it be on the battlefield of Dien Bien Phu or on the banana plantations of Martinique, the message is clear: Freedom for the colonized, and down with French imperialism!

Comrade Tano is a nonbinary, genderfluid person of Vietnamese descent. They choose to write under this name to protect themselves, while still supporting and celebrating their history as a Vietnamese socialist.