Houston — The Centers for Disease Control and Prevention announced a federal eviction moratorium on Sept. 1 to prevent the spread of the coronavirus. Coming several months into the pandemic, it may help keep many in their homes — but only until Dec. 31.

This is very much a case of too little, too late. Millions of renters and mortgage payers nationwide face uncertain futures, with the potential for houselessness.

Since May 19, Houston has been the largest city in the country with no eviction protections, as the Texas Supreme Court let a statewide eviction moratorium expire on that date. Since then, the eviction machine in this city has been churning out orders damning many families deeper into poverty. Houston-area landlords have filed nearly 10,000 eviction orders since March, according to Princeton University’s Eviction Lab. (tinyurl.com/evictiontracking) 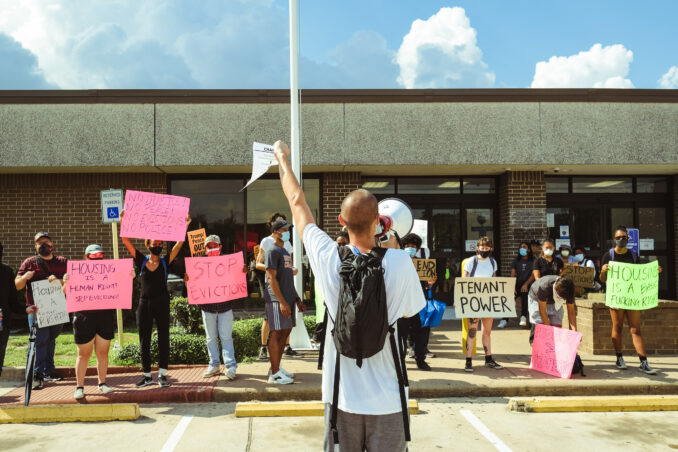 Many folks evicted since the start of this crisis have contracted COVID. Evictions present a direct threat, not only to those removed from their housing, but to public health in general. Eviction moratoriums are better than nothing, but they just kick the housing crisis farther down the road.

Houston political leaders like Mayor Sylvester Turner explain that they are relying on the goodwill of landlords in these hard times to do the right thing. This violent lack of policy protects only landlords, and we know they are not going to hold themselves accountable.

Most city dwellers are renters

In a city of 2.6 million people, 53.6% of Houstonians are renters. They don’t own the property they live in and often have to turn over the majority of what they earn to a landlord. As owners of property who charge people to live there, landlords are a protected class.

Their eviction notices are delivered by armed officers. Law enforcement, like the constable smugly delivering eight evictions in one day in a now-viral news clip, protect and serve property — not people. (tinyurl.com/HoustonEvictions)

A clear example of how threatening the slogan “Housing is a human right” is to the wealthy can be seen in what happened to the organization Moms4Housing. In their own words, “On January 14, 2020, in a pre-dawn raid of a residential home in Oakland, Calif., the Alameda County Sheriff’s [office] spent tens of thousands of taxpayer dollars to evict women and children from a vacant, speculator-acquired property.” Tanks and militarized law enforcement were deployed against them.

At a time when millions are unemployed, eviction moratoriums are the bare minimum needed to keep the public housed and safe from the virus. As soon as the moratoriums expire, those who were already living paycheck-to-paycheck before the pandemic — if they are still able to get a paycheck — will be expected to continue paying rent which many do not have, on top of being responsible for paying thousands in back rent owed as well.

The CDC moratorium supposedly protects tenants from being evicted for nonpayment of rent. But it leaves open measures for landlords to harass and sabotage renters with eviction by other means. Evictions can still be carried out for violation of lease terms.

According to the information service Texas Housers, “A tenant in the state of Texas can still be evicted for compounding late fees, and nowhere in the [CDC] protection is this remedied when the moratorium is up; conversely, it empowers states to make their own decisions. The Texas Legislature has passed a law that lets landlords define what a reasonable late fee is, which is a decision that recent history has shown to be used in cruel and exorbitant ways. We need to eliminate these punitive rules that exist only to line landlords’ pockets and exploit the confusion of tenants.” (Texashousers.org, Sept. 2)

The only thing that could ease the scale of the crisis at this moment is to cancel rents and mortgages. This should include any amount owed.

Other countries have done it in the name of public health. But to respect human life over property is not something we can expect the ruling class to suddenly start doing here in the U.S., not after hundreds of years of violently disrespecting life in the name of property. This is going to take a mass movement of people fighting for these protections.

In New Orleans, in Kansas City, in Philadelphia and even in Houston, people have banded together in front of eviction courts to block landlords from entering. Eviction defense is likely to grow in popularity, as the state protects the interests of private property over human life and violently displaces the living.

Charging people for a human necessity, such as housing, is not necessary. It serves to benefit the class of people who own and accumulate property. Abolish private property on stolen land

Join your local tenants’ union. Housing is a human right!