This city marked 100 consecutive days of anti-racist, anti-police protests on Sept. 5. The protests have shifted away from downtown and into North Portland – home to police “union” headquarters – and to the Portland Police Bureau’s East Precinct. 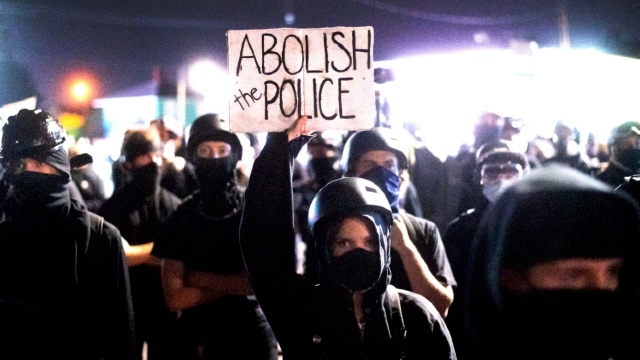 Police continue to deploy large quantities of tear gas and use other iron-fisted tactics that anger residents. They restrict access to neighborhoods, harass people and occupy their lawns without approval and under threat of retaliation. Residents report having to wear gas masks in their homes or relocate to hotels to escape the warzone conditions created by police in their campaign to “stamp out” the protests.

While tear gas and rampant police brutality continue as major problems, protesters and bystanders alike face another threat: Out-of-town fascist groups are staging violent, armed rallies in the city center and then driving around looking for fights.

Aaron J. Danielson, a member of the Vancouver, Wash.-based Patriot Prayer group that organizes many of the fascist rallies, was killed on Aug. 29 after those forces descended on that night’s anti-racist protest. The man who shot him, Michael Reinoehl, state’s in an interview to Vice Media on Aug. 3 that he fired in self-defense because Danielson threatened protesters with a knife. Reinoehl said: “I could have watched them kill a friend of mine of color. But I wasn’t going to do that.” Reinoehl’s social media reveals his deep involvement in the three months of Portland’s anti-racist, anti-fascist protests. (tinyurl.com/y5yauugk)

On the evening of Sept. 3 Reinoehl was killed in a rain of police bullets in Lacey, Wash., just south of Seattle, when a federal “fugitive task force” raided his home. The task force included U.S. Marshals as well as members of the Washington State Dept. of Corrections, Lakewood Police Department and Pierce County Sheriff’s Department.

The military-style assault on Reinoehl stands in sharp contrast to the way police handle right-wing and fascist shooters and mass murderers. Kyle Rittenhouse murdered two anti-racist protesters in Kenosha, Wis., on Aug. 25.  Dylann Roof murdered nine people, all Black, in 2015 at Emanuel African Methodist Episcopal Church in Charleston, S.C. Both were located, taken alive by police, and given food and water as they were arrested.

This leniency is not granted to untold numbers of Black and Brown youth who commit far less serious crimes — if any at all — and who face immediate arrest and warrants for re-arrest if they miss a court hearing.

As Portland completed its 100th day of protest in the face of fascist attacks, corporate media from coast to coast reported the date as a “grim milestone” reflecting the “grim reality” in Portland.

This skewed description fits in with the highly sensationalized, fact-scarce and distorted reporting on anti-racist mass protests which dominates U.S. media. For instance, photographs of city-sponsored homeless camps, set up after the COVID-19 pandemic began, have been passed around in right-wing media as evidence of “antifa training camps.” There are now fears that the people living in these camps, who are mostly those most vulnerable to the virus, will face violence from conspiracy-fueled fascist vigilantes seeking to attack anti-fascists.

The disinformation flows from the White House on down, with Trump fixating on Portland as an example of “everything wrong” with the country. Wild conspiracy theories are spreading unchecked, promoted by high-ranking government officials like U.S. Attorney General William Barr.

The reality on the ground in Portland bears little resemblance to the far right’s fever dreams. The city’s downtown area – the site of many large demonstrations and overwhelming police repression – continues its reopening after months of business closure due to the pandemic. Buses and trains, suspended in the wake of the initial protests and with many delays and re-routes in the following weeks, now run mostly on schedule, sometimes passing through billowing clouds of tear gas deployed by police just blocks away.

Federal forces, including the U.S. Secret Service, Immigration and Customs Enforcement and Customs and Border Protection, have largely withdrawn from Porltand after having operated without identification, snatching protesters off the streets into unmarked vans. 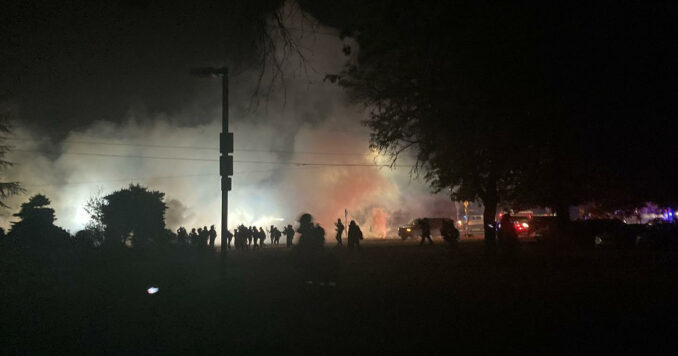 Night of Sept. 5 near the Ventura Park Elementary School, police in riot gear deployed large amounts of CS/tear gas in the neighborhood, affecting residents in their homes. The neighborhood is one of Portland’s poorest and most diverse, one of the few majority people of color.

Oregon’s Democratic governor Kate Brown has now deputized Oregon State Police as federal agents. They have the authority to charge people with committing federal offenses and have already begun to do so.

The Portland chapter of the Democratic Socialists of America stated in an Sept. 6 Facebook post: “Last night, on the 100-day anniversary of the uprising against police violence, several Portland DSA members, including members of the steering committee, were arrested on fabricated felony charges.”

Oregon State Police and the Portland Police Bureau continue to beat, brutalize and gas peaceful protesters at the behest of politicians who say they are on the protesters’ side. These forces of state repression also continue to terrorize Portland neighborhoods with impunity. One resident tweeted during such an assault that “someone is still yelling ‘No tear gas please. We don’t have any masks’ over and over again even though there aren’t any protesters left in the area to gas.”

Such huge amounts of tear gas and other unknown chemical weapons have never before been deployed in Portland’s dense neighborhoods. The effect on humans, and also on animal and plant life, is not understood. The city’s environmental bureau has requested increased testing of soil and the waters of the Willamette River, which flows just blocks from the downtown protests. There is fear that with the arrival of heavy rains in the fall, there will be a mass run-off of tear gas residue into the area’s waterways, causing untold damage to marine ecosystems still recovering from decades of rampant industrial pollution.

Records obtained by The Oregonian revealed that Portland police spent more than $117,500 between May 30 and July 14 on impact munitions, tear gas and other weapons. (oregonlive.com, Aug. 6)

On day 100 of the protests, between the night of Sept. 5 and the morning of Sept. 6, police arrested 59 people, by far the highest number of arrests since the protests began in late May. 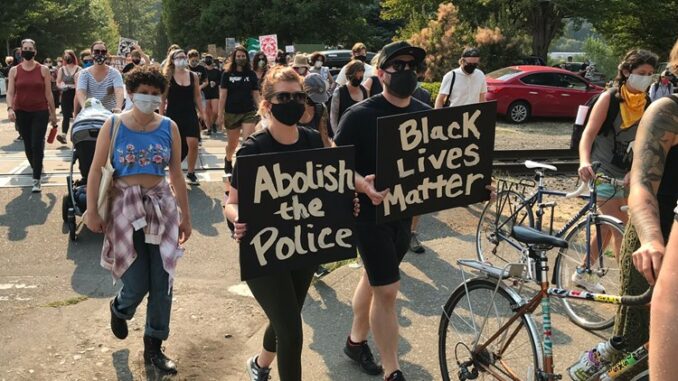 As Portland and other cities continue anti-racist, anti-cop, anti-fascist protest, it is clear that the state’s desire to suppress this movement has not abated. As the November elections draw near, calls for “law and order” from both the Republican and Democratic Parties will grow louder, and disinformation spread about protests will be amplified.

But as past months have shown, this movement will not fold so easily. It stubbornly continues fighting for racial justice and against police brutality, even in the face of ever-more violent and inhumane state repression and vigilante violence.

As more and more people directly participate in the protests or witness them from their front porches and living room windows, more see that the narrative pushed by the police and politicians is completely unmoored from reality.

At this critical juncture, it is more important than ever for all anti-fascist, progressive and leftist forces to stand in solidarity with the movement initiated under the banner of Black Lives Matter, and to continue to fight back.