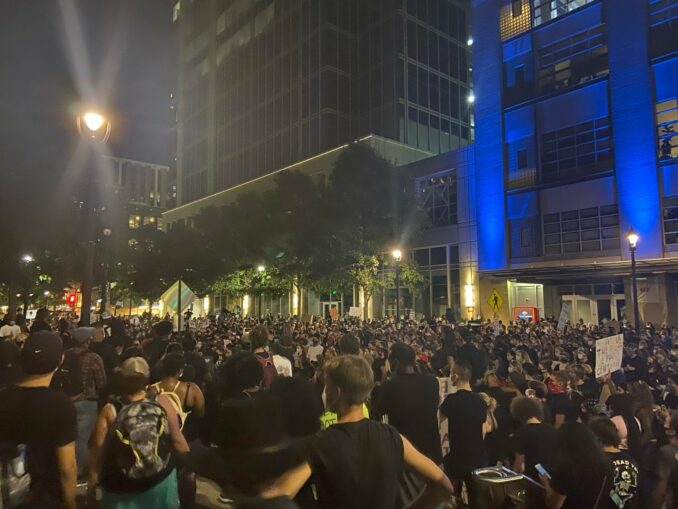 Raleigh, N.C. — On Aug. 28, in solidarity with Jacob Blake and Kenosha, thousands flooded the streets in downtown Raleigh to demand police abolition, the abolition of capitalism and decolonization.

Raleigh capitalists could scarcely hide their zeal to wield their oppressive apparatus. By the beginning of the march at 7 p.m., most businesses and government buildings downtown had boarded up their windows, and most government buildings had barricades placed in front to create choke points for concentrated police violence.

Dutifully following the direction of their masters, many corporate media news outlets breathlessly spoke of the possibility of property damage. What media narratives missed was earlier in the day when Wake County District Attorney Lorrin Freeman had elected not to designate the Raleigh police killing of Keith Collins in January as a wrongful death. (tinyurl.com/y5w2ye5l) To the people of Raleigh — Black Lives Matter, but to corporate media, as USA Today so aptly stated in early June, “Buildings matter, too.”

In protest, crowds gathered at the Wake County Justice Center and marched to different sites of the white power structure throughout the city. First, to the N.C. State Capitol, where they had torn down Confederate monuments on Juneteenth. Then, to the Governor’s Mansion, where after a week-long continuous demonstration earlier this year, the governor was forced to veto legislation that covered up in-custody deaths in county jails.

Marchers then went to the Department of Public Instruction to draw together the many movements across the state, including efforts by the Wake County Black Student Coalition to end police in Raleigh schools.

The crowd called out various local officials, including the district attorney, and chanted “We see you. We love You” to people held inside the center before continuing the march.

Around 10 p.m., the mayor declared a curfew, opening the way for a planned police attack. Demonstrators began to reposition and set fire to barricades to protect the march from attempted flanks by police officers on golf carts, which were used by the riot cops and SWAT teams to try to get in position around the march.

For the most part, the police were unsuccessful and only able to effect a number of obviously illegal arrests late in the evening, including arrests of legal observers. Police also tried but failed to arrest journalists, despite journalists being designated as exempt from the curfew.

Months into the protests, they have continued to grow louder, larger and more radical in Raleigh and throughout North Carolina and increasingly hardened against policing.

Into the streets, defund the police, no justice, no peace!