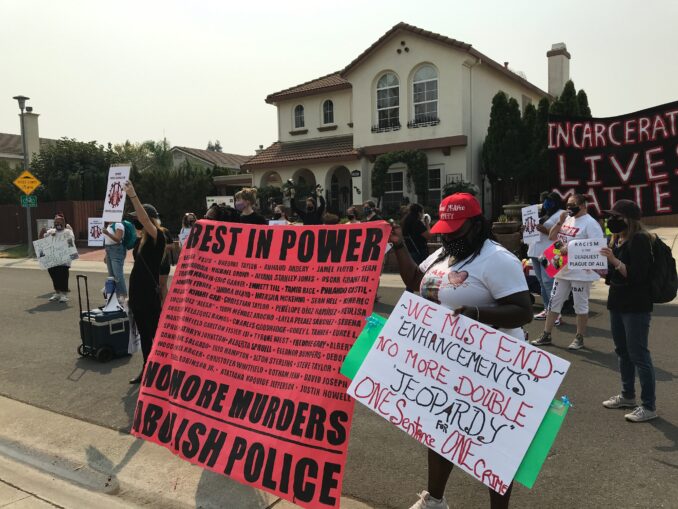 Demonstrators speak out at house of CDC Secretary Diaz on Aug. 30.

On Aug. 30, a boisterous and angry coalition of prisoners’ family members, former prisoners and prisoners’ rights activists protested outside the homes of California Department of Corrections (CDC) Secretary Ralph Diaz and Gov. Gavin Newsom, who both reside in Sacramento, the state capital. The demonstration, organized by No Justice Under Capitalism, included a large number of spouses and other relatives of prisoners who are part of We Are Their Voices.

Reported COVID-19 infections of California state prisoners have reached 10,565, with 57 reported deaths. Gov. Newsom has refused to order mass releases of prisoners, for whom COVID could be a death sentence. California prisons are filled with the elderly and people with life-threatening and chronic illnesses.

Many wildfires in the vicinity of prisons, including the California Medical Facility at Vacaville and California State Prison-Solano, continue to spew clouds of ash and dust. While area residents have been evacuated, the CDC has yet to evacuate any of the prisons.

Outside Secretary Diaz’s house, angry family members spoke about their loved ones in prison. Their message was strong and simple: “Let them go! We will take care of them.” One of the excuses given by prison administrators to justify their inaction has been to say that the prisoners have nowhere to go. If today’s demonstrations were any indication, many of the prisoners have loving family members who want them returned to the community so they can provide them with care.

Later at Gov. Newsom’s house, protesters demanded the governor come out and speak with them. Newsom, who was known to be home at the time of the protest, was nowhere to be seen. The coalition promised to return until the prison system acts to save the lives of California prisoners.