Kenosha, Wis., became the epicenter of the anti-racist struggle after a 29-year-old Black man, Jacob Blake, was shot seven times in the back at point-blank range by a white police officer on Aug. 23. Kenosha is 40 miles from Milwaukee, Wisconsin’s biggest city.

A recorded video showed that the unarmed Blake was shot as he attempted to enter his car. Three of his children were in the back seat and watched his shooting in horror.  Blake’s father has reported that his son, now paralyzed from the waist down, is still fighting for his life.

Two nights later, an avowed white supremacist, 17-year-old Kyle Rittenhouse, fatally shot two anti-racists who were protesting in Kenosha. Rittenhouse was taken into custody only on the next day–alive and unharmed. Rittenhouse reportedly attended a pro-Trump rally in Des Moines, Iowa, in January.

Even more damning evidence of racist police bias was a videotape showing the Kenosha police thanking armed white supremacist vigilantes for patrolling the streets – not long before the fatal shootings took place.  Cops offered water to the vigilantes, including Rittenhouse.

On Aug. 26, reacting to these recent developments in Kenosha as well as to all the protests ignited by the public lynching of George Floyd in Minneapolis in May, the six teams in the National Basketball Association playoffs carried out an unprecedented and historic strike.

This strike began when the Milwaukee Bucks refused to come onto the court for their scheduled game against the Orlando Magic.  The other teams — Los Angeles Lakers, Portland Trailblazers, Houston Rockets and Oklahoma Thunder — showed solidarity with the Bucks by withholding their labor, that is, their skills and talents.

These teams, along with others eligible for playoffs, have been playing in a contained environment separated from their families — a bubble — in Orlando, Fla. The bubble is aimed at preventing the spread of the COVID-19 virus.

These teams represent the main U.S. professional basketball league – second only to the National Football League in terms of popularity in the United States. The rosters of these NBA teams are over 75% African American.  Many of these players come from communities similar to the one in which Jacob Blake lives, that is, underserved and plagued by police terror.

Many of these players, like Jacob Blake, are fathers to young children. When they look in the mirror, they can identify with Jacob Blake. Since late May, many of these same players, before entering the bubble, joined protests demanding justice and an end to police brutality and racism. 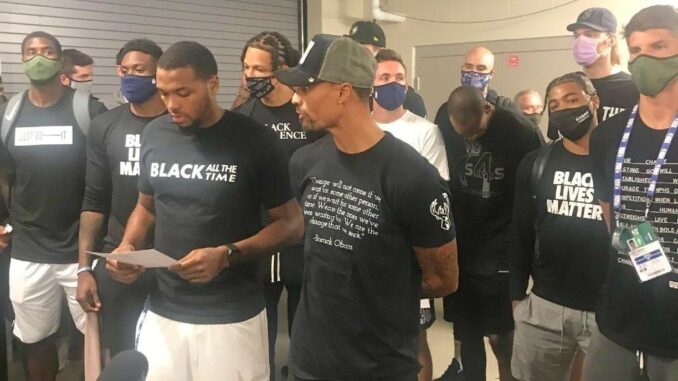 Bucks players Sterling Brown and George Hill read their team’s official statement on Aug. 26: “The past four months have shed a light on the ongoing racial injustices facing our African American communities. Citizens around the country have used their voices and platforms to speak out against these wrongdoings.

“Over the last few days in our home state of Wisconsin, we’ve seen the horrendous video of Jacob Blake being shot in the back seven times by a police officer in Kenosha, and the additional shooting of protesters. Despite the overwhelming plea for change, there has been no action, so our focus today cannot be on basketball.

“When we take the court and represent Milwaukee and Wisconsin, we are expected to play at a high level, give maximum effort and hold each other accountable. We hold ourselves to that standard, and in this moment, we are demanding the same from our lawmakers and law enforcement.

“We are calling for justice for Jacob Blake and demand the officers be held accountable. For this to occur, it is imperative for the Wisconsin State Legislature to reconvene after months of inaction and take up meaningful measures to address issues of police accountability, brutality and criminal justice reform. We encourage all citizens to educate themselves, take peaceful and responsible action, and remember to vote on Nov. 3.”  (nba.com)

Several years ago, Milwaukee police brutalized Brown. He has a lawsuit pending against the cops.

All the teams in Orlando met late on Aug. 26 and again the next day. They decided to resume the playoff season either Aug. 28 or 29. All games scheduled for Aug. 27 were postponed.

NBA champion, and now popular sports commentator, Kenny “The Jet” Smith, walked off the live set of TNT’s “Inside the NBA” program on Aug. 26 in support of the NBA boycott. 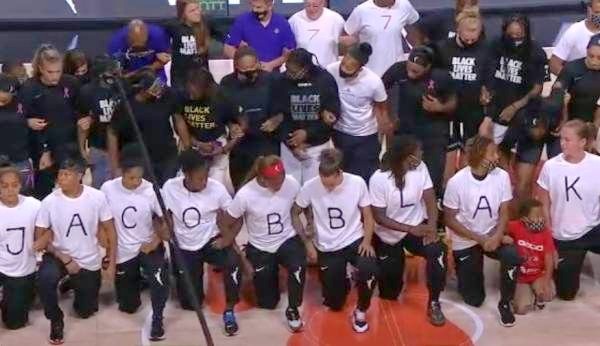 Washington Mystics (in white shirts) lead five other WNBA national playoff teams in a protest against the killing of Jacob Blake, Aug. 26,

On the basketball court, the Washington Mystic team wore Jacob Blake warm-up shirts with seven bullet holes drawn on the back. At the last minute, they decided not to play. The WNBA’s Atlanta Dream, Connecticut Sun, Los Angeles Sparks, Minnesota Lynx and Phoenix Mercury also boycotted their games.  No WNBA games will be played on Aug. 27.

In a statement representing the WNBA players’ union, Atlanta Dream forward Elizabeth Williams said: “What we have seen over the last few months, and most recently with the brutal police shooting of Jacob Blake, is overwhelming. And while we hurt for Jacob and his community, we also have an opportunity to keep the focus on the issues and demand change.” (espn.com, Aug. 26)

The WNBA has given extra attention to demanding justice for Breonna Taylor, the 26-year-old Black woman and EMT who Kentucky police fatally shot multiple times this past March in her own home.  No police officer has been charged with her murder.

The MLB action is significant. Only a small number of African American players are in the MLB, and historically the MLB has taken little to no progressive stances against racism since Jackie Robinson broke baseball’s color line in 1947.

Tennis player Naomi Osaka, a two-time Grand Slam winner, is refusing to play her semifinal tennis match in the Western & Southern Open on Aug. 27. Osaka tweeted, “Before I am an athlete, I am a Black woman.  Watching the continued genocide of Black people at the hands of the police is honestly making me sick to my stomach.”  Osaka is of Haitian and Japanese heritage.

National Football League teams such as the Detroit Lions, the Washington football team, Indianapolis Colts and others turned their practice sessions into press conferences and discussions to protest police brutality and systemic racism.

The National Hockey League has postponed all its games for Aug. 27 and 28.

Whatever happens going forward, the NBA players’ two-day strike has made an indelible and historic impact, bringing a whole new awareness to the struggle for social change in the United States and around the world.