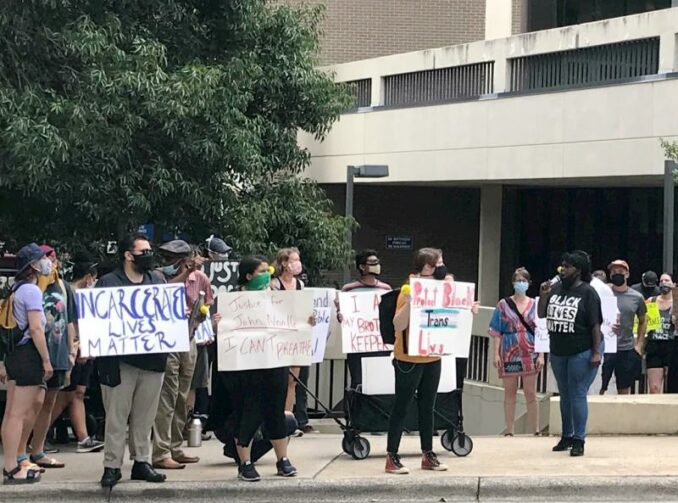 Aug. 5 protest after video of John Neville’s death is made public, Greensboro, N.C.

On Aug. 21, the newly formed Triad Abolition Project began the 38th consecutive day of direct action against Forsyth County’s killer jail in Winston-Salem, N.C. The Project was formed earlier this year to demand justice in the case of John Neville, who was murdered by jailers in December 2019. The county sheriff kept the news from the public for months.

Neville’s autopsy found that he died of cardiac arrest and a brain injury caused by a lack of oxygen. Video obtained by the Project shows Neville saying over 20 times that he could not breathe. Following the protests outside the jail, five guards and a jail nurse were charged with felony manslaughter.

The jailers are exempt from state regulations barring what they call “prone restraint,” which is more accurately described as hog-tying because it is so frequently deadly. This is not the first death by hog-tying in Forsyth County; also within the N.C. Triad area, Marcus Smith was murdered by Greensboro police officers using the same technique in 2018.

While the Project has forced the district attorney to charge those responsible for Neville’s death, neither the sheriff nor the DA have made policy changes. Both the sheriff and local police got increased funding in 2020 in the midst of national economic collapse and the shuttering of many social programs.

The 38-day encampment in Winston-Salem went up following a successful encampment action at the governor’s mansion in Raleigh in early July, which ended when the governor vetoed a bill to prevent the publicizing of autopsy reports from in-custody deaths such as Neville’s.

Dozens of demonstrators with the Project face charges for participating in the action. Currently the Project’s demands of the Sheriff and District Attorney are: