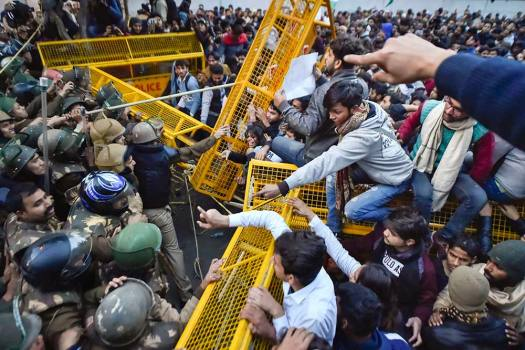 Students try to breach a police barricade in New Delhi during a December 2019 protest against the Citizenship Amendment Act and National Register of Citizens.

The Citizenship Amendment Act and National Register of Citizens have increased tension and hostility among various communities in India. In particular, these racist and anti-immigrant policies have fueled communal turmoil and expanded state-endorsed police terror on marginalized groups of people.

In response to these acts of horror, minority/oppressed communities have built power in the streets, staged sit-ins, and organized protests at two prominent Muslim-majority universities – Jamia Millia Islamia (JMI) and Jawaharlal Nehru University (JNU). The pushback against the state’s genocidal tactics shows promise that a movement is in the making. The state is attempting to choke any expression of discontent against the CAA and NRC by supporting communal violence against India’s oppressed communities and kidnapping and caging community organizers.

On Dec. 11, India’s Parliament passed the CAA, which provides a pathway to citizenship for undocumented religious minorities who migrated to India from Pakistan, Bangladesh, or Afghanistan but excludes Muslim migrants. (CNN, Dec. 17) Prior to the implementation of the CAA, India’s Supreme Court mandated that Assam, a province that boarders Bangladesh, publish an NRC. (Vox, Sept. 17, 2019) Last year the Indian government, led by the fascist Bharatiya Janata Party (BJP), announced that it will implement an NRC in every province in order to determine who can and cannot remain in India. (Vox, Sept. 17, 2019)

According to the Minister of Home Affairs, Amit Shah, “Illegal migrants are like termites” and have no right to stay in India. (Live Mint, April 11, 2019) In August of 2019, Assam issued its final NRC report; 2 million people living in this province are now facing the threat of deportation. (Reuters, Sept. 7, 2019) Both the CAA and NRC are inherently anti-im/migrant and anti-poor policies that target Muslims, Hindu laborers, tribal community members, and anyone who cannot meet the CAA and NRC’s capricious and cruel criteria.

Since the CAA and NRC’s implementation, minority/oppressed communities have issued a direct and militant response to the government: We reject the CAA and the NRC. Indeed, beginning in December Muslim women led a sit-in at Shaheen Bagh, a working-class neighborhood in Delhi, that lasted for more than three months. (Al Jazeera, March 24)

An excerpt from Janta Ka Reporter states that: “To be in Shaheen Bagh was something else. It was magical; it was exhilarating. It was like watching the triumph of the human spirit, the victory of fortitude against adversity. Soon, it became a pilgrimage centre of secular India harping on the notions of a shared past. Muslim women were shortly joined by Hindu sisters; some came in from colonies like Lajpat Nagar and Sarita Vihar, others joined gradually from neighbouring cities like Chandigarh, Jaipur and Ghaziabad.

“A little later, a formidable Sikh contingent arrived as reinforcement. Then a delegation of Christian nuns came in, giving Shaheen Bagh the look of a miniature India. Some came from Kerala, some from Chhattisgarh, some from Punjab, and the women of Shaheen Bagh accommodated them all. And the protest began showing signs of a movement.” (Aug. 25)

Student-led anti-CAA and anti-NRC demonstrations were also underway at JMI’s and JNU’s campuses. However, those who work in the service of BJP soon exerted efforts to squash the movement at these universities.

In February, the state exerted its most desperate attempt to quell the anti-CAA and anti-NRC protests by staging the Delhi Riots, an event that claimed the lives of 53 people and injured 500. An investigation by Amnesty International India reports that Delhi police were “complicit and an active participant” in the Delhi Riots. (Al Jazeera, Aug. 28)

Now, law enforcement officials are channeling their efforts to oppress the masses by kidnapping and caging prominent student organizers. On Aug. 25 Sharjeel Imam, a PhD candidate at JNU, was charged under the Unlawful Activities Prevention Act, an anti-terrorism law, for his alleged involvement with the Delhi Riots. However, Imam has been in police custody since Jan. 28, which means he could not have participated in the violence that took place in February. Meeran Haider, a student at JMI, is also facing outrageous charges under the UAPA.

As we work towards abolishing police in the United States, we must be in radical solidarity with all who have been harmed at the hands of law enforcement officials around the world. We know that it is right to rebel against the state and we are with those who refuse to let the CAA and NRC determine whether or not their existence is enough to remain in India.

We are also in deep solidarity with Sharjeel Imam, Meeran Haider, and all political prisoners. It is absolutely vital that their work and dedication to the struggle be central to how we exert our efforts in the current uprising. We must continue to demolish the oppressor’s power and build the people’s power — tear down the walls, free them all!