This article is an edited version of a talk by Adelana Akindes during the Aug. 30 United National Antiwar Coalition Webinar: “After the DNC & RNC — We Can’t Breathe! Keep it in the Streets — Against Racism, Evictions and War.” Akindes is  a leader with the Coalition to March on the DNC and Students for a Democratic Society in Kenosha, Wis. 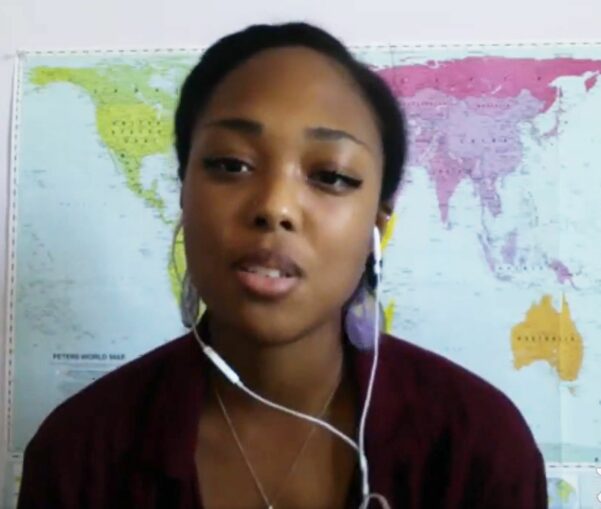 I’ve been attending the Kenosha uprising since the shooting of Jacob Blake Aug. 23 and was actually abducted by the feds on Aug. 26 for 24 hours.

We’d been building for a year for the March on the DNC, which was held Aug. 20. Our goals were to defeat Trump and send a message to the politicians of both parties that our movements are going to grow and challenge their power.

Following the lynching of George Floyd, and in solidarity with the March on RNC in Jacksonville, Fla., we put “We can’t breathe” at the forefront of our march. Families of victims of police crimes across Wisconsin shared their heartbreaking stories at a rally. Even during the pandemic, we were able to gather hundreds of people to listen to the stories and be in solidarity.

We marched through downtown, stopping at symbolic locations — the police station and Homeland Security.

Just three days later, Jacob Blake was shot in the back seven times by Kenosha police. We all felt anger and devastation. We were called to act, to march, speak, mobilize and organize. We faced warlike conditions with the deployment of the National Guard and constant use of tear gas, rubber bullets and flash bombs.

On Wednesday night, me and two others were walking to join the march, bringing protective gear and medical supplies, when three unmarked vehicles swooped in out of nowhere. The feds and local officers arrested us for a curfew violation. We were given disproportionate treatment. We were demonized. We were given orange suits. I spent 24 hours in jail with no phone call.

Contrast this with Kyle Rittenhouse who murdered people, yet was able to walk through the crowd after killing them. These experiences have deepened our understanding of the inherent injustices woven into the system.

We know that the biggest systemic changes and advancements have happened through protests: the Civil Rights Movement in the United States, fighting apartheid in South Africa, on strike for workers’ rights, revolutions in South America and Cuba. So we recognize that the way to move forward is through protest, and that’s what’s happening in Kenosha today.

Even with the National Guard and the military coming in and trying to silence us, locking us up and trying to instill fear in us, we’re still coming out. Even though it’s been a scary experience, it gives us a glimpse of how power operates. My message is keep it in the streets, keep going, keep marching, keep organizing.

Join an organization. If it wasn’t for SDS, I probably wouldn’t have gotten out as soon as I did. We had thousands of calls coming in.