This year marks the 75th anniversary of the United States atomic bombing of Japan, the first and only use of nuclear weapons for warfare.

On Aug. 6, 1945, the U.S. military dropped the “Little Boy” atomic device from a B-29 called Enola Gay onto the city of Hiroshima. Three days later, a plutonium bomb was detonated over the city of Nagasaki. 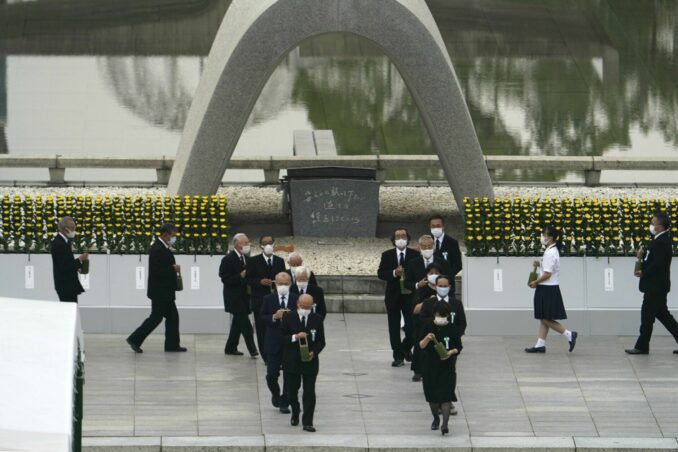 Tens of thousands of people were incinerated instantly. Many more died soon after from their injuries. By the end of 1945, over 250,000 people had died. In the years following the bombings, many more died from radiation-related illnesses.

Among the victims were 22,000 Koreans, conscripted as forced laborers by the imperialist Japanese regime during World War II, as well as a number of conscripted Chinese workers.

Both cities were targeted because they were among the few Japanese cities that had not already been destroyed by explosive and incendiary bombing raids and would provide a clear test of the weapons.

In Hiroshima, over 60 percent of the buildings were destroyed. The bomb was dropped over the city center and the brunt of the impact fell on residential areas, in line with the U.S. policy of bombing Japanese civilian populations. Nagasaki was almost entirely flattened.

The United States is the only country ever to use nuclear weapons in war. No official apology has ever been issued, and Washington has never shown remorse for the horrific act of destruction it perpetrated on the Japanese people.

Rather than being an unfortunate wartime necessity, as apologists have claimed, the atomic bombings were a show of force to the world, an assertion of U.S. military hegemony in Asia and a warning to the Soviet Union. The bombings demonstrated to the world that the imperialist United States was willing and able to use nuclear weapons against civilian populations, proving a total disregard for human life.

For decades, survivors of the bombings, known as “hibakusha” in Japanese, have gathered at the Hiroshima Peace Memorial Park to mourn the horror and tragedy they and so many others endured. This year, however, saw a greatly diminished turnout of hibakusha, in part due to the advancing age of the survivors and in part due to the threat posed by COVID-19. City officials expect this will likely be the last major anniversary of the bombing; the average age of survivors is 83.

Japanese anti-war activists have long been key voices in the movement against nuclear weapons and military occupation. The United States maintains over 20 bases in Japan, 70 percent of which are located on the island of Okinawa. The people of Okinawa have been actively opposed to the U.S. military presence since the bases were built.

The postwar Japanese Constitution, imposed by the United States, renounced war and military engagement abroad. Since then, however, Japan has built up its military and supported U.S. interventions, such as those in Korea and Vietnam.

The right-wing Japanese government, led by Prime Minister Shinzo Abe, has ordered more military spending, ended a ban on arms exports and passed security laws that allow sending troops abroad, despite opposition from the majority of the population. These actions are in line with the U.S. buildup of its military presence in Asia, with the goal of challenging China and the Democratic People’s Republic of Korea.

As China’s power and influence grow, the capitalist United States seeks to maintain its imperialist stranglehold on the world and stamp out all opposition. U.S. imperialism requires a strong military that can protect its economic interests across the globe and guarantee steady profits for the capitalist class.

In August 2019, the U.S. withdrew from the 1987 Intermediate-Range Nuclear Forces Treaty. In a dangerous push toward nuclear conflict, the Trump administration is bent on igniting a new nuclear arms race. In May of this year, senior Trump officials discussed the possibility of conducting new U.S. nuclear tests. These actions are highly alarming, especially in light of U.S. preparation for major power conflicts with nations that resist U.S. imperialism and domination.

All progressive forces must be firmly against war and oppose all imperialist military ventures and expansion. On the anniversary of the worst bombing in the history of the world, anti-war forces must push for the dismantling of the U.S. war machine, especially nuclear disarmament, to ensure that the world never again undergoes the horror of nuclear attack.