This slightly edited talk was given at an Aug. 13 Workers World Party webinar, “From Black August to Black Lives Matter,” hosted by the WWP Prisoners Solidarity Committee. 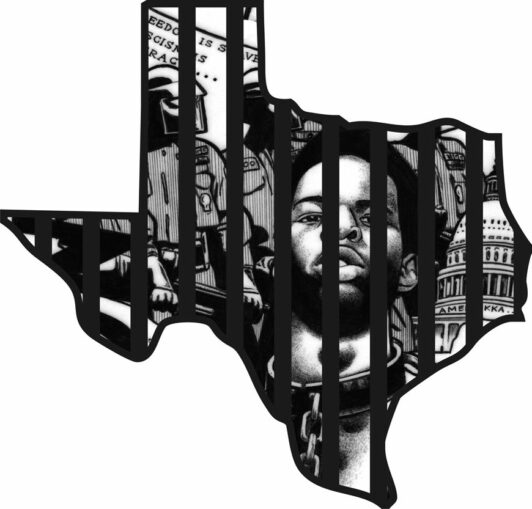 Revolutionary greetings from Houston, Texas, a city that contains the country’s third largest jail. The Harris County Jails sit right on Buffalo Bayou, just yards away from where the city was founded on stolen Indigenous land, and in an area that has flooded reliably through several major hurricanes in the last century. The Harris County Jail complex cages over 8,000 prisoners, most of whom are awaiting trial.

I am speaking to you from the state of Texas where 75 of the state’s 104 prisons do not have air conditioning and where temperatures often rise above 100 degrees in the summer. These prisons have a hard time retaining guards on staff. Guards who, to this day, wear Confederate uniforms.

According to the Marshall Project, “Several state prison units are located on former plantations where mostly Black and Brown people are still forced to work in the fields. Many still harvest cotton. These prisoners still don’t get paid in Texas. And they still face punishment if they refuse to work.”

Texas also has 26 Immigration and Customs Enforcement Detention Facilities that detain migrants who are often trying to escape the [results of] political and environmental violence by the U.S. government abroad. Migrants in detention in south Texas have risen up and practiced hunger strikes and work stoppages only to be met with brutality by guards in riot gear. These revolutionary actions to resist death are an affront to the ruling class — and an inspiration to us all.

‘Self-determination by any means’

From an always-present and ever-growing movement of abolitionists in Texas, to each and every one of the 38 countries where the repressive U.S. model of prisons and policing has been exported, we are fighting for abolition like our lives depend on it. Because they do.

The U.S. empire has a violently extreme history of institutionalizing and codifying white supremacy. Prisons in form and function are monuments to white supremacy. They are concentration camps for the poor, oppressed nationalities and dissenters.

This is exemplified in this moment of global pandemic, where the rapidly accelerating and completely preventable deaths of people inside and outside prisons are an act of genocide. This does not come as a revelation, but as a call to action.

We’re not building toward reform of any of these institutions. Prisons, jails and detention centers are themselves a reform of enslavement and encomiendas. Reform gives us more of what we’ve already got  –— structures of ceaseless violence that continue to maintain wealth accumulation for human traffickers and perpetrators of genocide.

We are building toward abolition, toward revolution. We support diversity of tactics and the right of the oppressed to self-defense and self-determination by any means. We are fighting to redirect stolen resources toward human needs like health care, housing, safe water and food and to transform the root causes of suffering and violence.

From Black August to today’s movement for Black Lives, we honor every revolutionary who came before us, making it ever possible to win better futures. We honor them by practicing abolition and practicing revolution everyday.

We recently reformed the Prisoners Solidarity Committee because as abolitionists, we fight the isolation of prisons, jails and detention centers and the divisions that those violently maintain. And we fight it with the most powerful weapon we have, and that’s solidarity. From Auburn to Attica in the 1970s, the Prisoners Solidarity Committee built structures of resistance centered on incarcerated people and their families and communities they were stolen from.

As a member of the original Prisoners Solidarity Committee, Leslie Feinberg has said, “The only way we can build real solidarity in our movements is to be the best fighters of each other’s oppression. It’s the kind of solidarity that’s forged in the heat of struggle that makes lasting bonds.” (“We Are Everywhere: Protest, Power, and Pride in the History of Queer Liberation”)