By the Communist Party of the Philippines

Workers World is reprinting the following statement from the Communist Party of the Phillipines that condemns the murder of Randall Echanis on Aug. 10. Since the 2016 presidential election in the Philippines, Rodrigo Duterte has carried out numerous assassinations of peace activists and progressive organizers. Duterte’s “War on Drugs” is responsible for at least 27,000 extrajudicial killings since 2016. 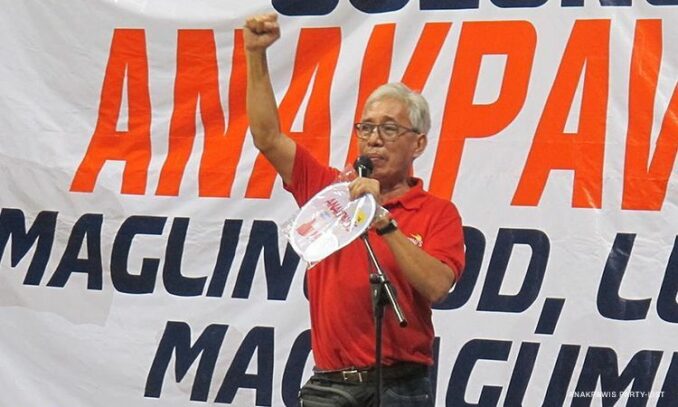 The Communist Party of the Philippines (CPP) condemns in the strongest terms the cold-blooded murder of Randall Echanis, Chairperson of the Anakpawis party-list and peace consultant of the National Democratic Front of the Philippines (NDFP). Ka Randy, 72, was killed early this morning (Aug. 10) by armed men in his rented home in Novaliches, Quezon City.

Echanis’ murder is undoubtedly the handiwork of the Duterte fascist regime, ordered by its cabal of criminal terrorists in the National Task Force and carried out by Duterte’s death squads in the military and police. Duterte himself has publicly ordered his military and police forces to hunt down consultants of the NDFP after he terminated peace negotiations in 2017.

The extrajudicial killing of Echanis is a vicious attack against the democratic forces who continue to stand firm even in the face of the all-out attacks of the tyrannical regime against the people and their civil and political rights. It was carried out by state forces in the most treacherous of manners in the vain hope of terrorizing the people and cowing them into submission. It forms part of the continuing scheme of the Duterte regime to consolidate its fascist reign through murder and other acts of state terrorism.

The regime has stepped up its attacks in its desperation to quell the seething unrest amid the deepening socioeconomic and public health crisis and rising discontent in both the cities and countryside.

All democratic forces must unite and condemn the murder of Ka Randy. They must demand that Duterte himself be made to pay for the Echanis murder as well as for the murders of fellow peace consultants Julius Giron and Randy Malayao. They must not relent in their demand for justice for the thousands of others who have been killed, imprisoned, tortured and terrorized in the course of the fascist regime’s fake drug war, bloody counterinsurgency, war against the Moros and all-out drive of political repression and state terrorism.

A hero of the Filipino people

On behalf of all revolutionary forces, the Communist Party of the Philippines extends its deepest sympathies to Echanis’ wife, children and family, friends and comrades in the national democratic movement. Having devoted most of his life to the cause of national and social liberation, Ka Randy is, indeed, a hero of the Filipino people. He was a stalwart of the cause of the workers and peasants and was a unifying force among the different classes and sectors.

The CPP pays tribute to Ka Randy as an ageless revolutionary fighter. He was among the thousands of young activists who joined the revolutionary mass movement in the late 1960s and fought courageously against the U.S.-Marcos dictatorship. When martial law was declared in 1972, he joined the armed struggle and was among the pioneers of the New People’s Army (NPA) during its period of expansion and growth in the northern Luzon regions.

He was captured, tortured and incarcerated under the Marcos dictatorship. He was again arrested and detained under the Aquino and Arroyo regimes. He later continued to work for the national democratic cause by advancing the cause of land reform in all possible fields of democratic struggle. He became known as one of the pillars of the Kilusang Magbubukid ng Pilipinas, as well as the Anakpawis party-list.

Because of his advocacy for the cause of the peasantry and the toiling people, the National Democratic Front of the Philippines asked him to serve as one of its consultants in peace negotiations, specifically on the matter of land reform. He gave his expertise in the NDFP efforts to prepare its draft Comprehensive Agreement on Socio-Economic Reforms (CASER) which outlines the measures necessary to address the key issues at the core of the civil war in the Philippines, with land reform and national industrialization as the centerpiece programs.

Among the Red fighters during his younger years, Ka Randy was known by his nom de guerre as Ka Makar, which he said was not only a tribute to Macario Sakay, erstwhile Filipino revolutionary who continually fought with arms against the American colonial forces in the early part of the 20th century, but was also an acronym for “Maso” [sledge hammer] and “Karit” [sickle]. Indeed, as a revolutionary fighter, Ka Randall always firmly held the hammer on the one hand, and the sickle on the other, worked to build the worker-peasant alliance, and upheld the cause of proletariat to his last breath.

The Party and the entire revolutionary movement will forever uphold the memory of Ka Randall Echanis. Uphold his example of selfless and untiring service to the toiling masses and people.

End the tryanny and terrorism of the Duterte fascist regime!