Graduate student workers at the University of California-Santa Cruz, represented by United Auto Workers Local 2865, have won the rehiring of 41 teaching assistants fired in February for striking. “In large part, this is a win for Santa Cruz workers — for workers in general,” said Veronica Hamilton, the UAW 2865 Santa Cruz unit chair and one of the 41 fired. (Santa Cruz Sentinel, Aug. 13) 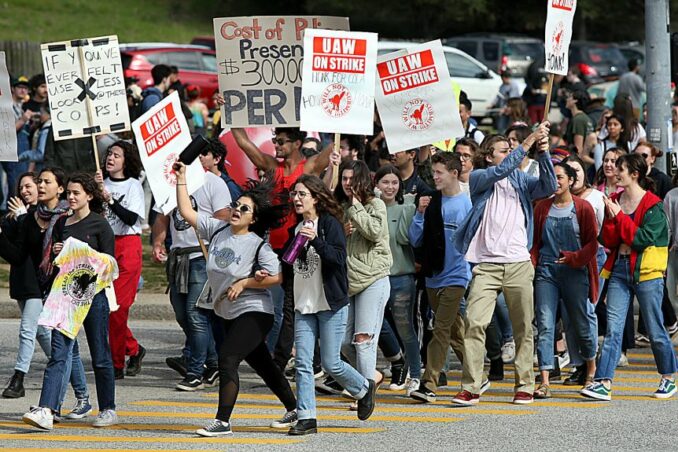 The struggle began in 2019 after a contract between Local 2865 and the statewide university system was ratified. Santa Cruz teaching assistants went on a wildcat strike — not permitted under the contract’s “no-strike” clause — to demand a Cost of Living Allowance (COLA) increase. They argued that their $2,400 monthly income was not enough to cover the high costs of rent and other necessities in that part of the country, and withheld grades for that semester. On Feb. 10, they escalated the fight to an all-out strike, and graduate students at several other campuses joined their “COLA4ALL” campaign.

The movement for a livable income won support among the student body, the faculty and the community, with several militant demonstrations blocking traffic. The firings prompted solidarity actions around the state.

The university retaliated against 75 Santa Cruz strikers, firing over half and denying others teaching work. Those with the lighter punishment won a path to reinstatement in an earlier agreement. Now with the latest mediated settlement, all those disciplined will have the opportunity to work this fall.

Disciplinary records will be expunged, including those of 245 who were given warning letters for withholding grades.

This is still only a partial win for the student-workers; reinstatement could be revoked if they strike again. While the UC management extended a $2,500 yearly “housing allowance” during the strike, teaching assistants still need the COLA raise. But as Hamilton told the Sentinel, “Some of our most brilliant scholars are able to return and that’s excellent.”