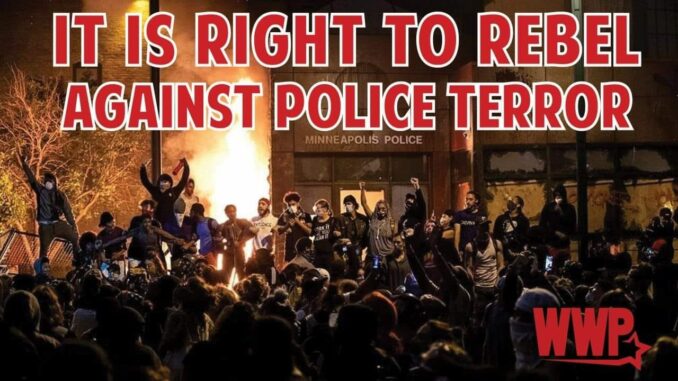 As the November election approaches, pressure will mount on revolutionary organizations within the U.S. to fall in line with the Democratic Party and endorse Joe Biden.

The argument often made is that a Democratic president is needed to counter reactionary policies put in place by a Republican administration.

Does this claim hold up to scrutiny? If Joe Biden is elected, can we expect him to reverse Trump’s reactionary, white supremacist policies? Let’s examine Biden’s own record, as well as the record of the past two Democratic administrations, to see if this is a reasonable expectation.

People across the U.S. are outraged by the daily crimes against humanity committed by ICE and the Border Patrol under Trump. Can we expect Biden to bring the detention and deportation machine to a halt, or even slow it down? His record, as well as his recent remarks say otherwise.

From 2009 to 2017, while Biden was Barack Obama’s vice president, the U.S. deported more than 2.5 million undocumented migrants, more than had been deported during the entire 20th century. (abcnews.com, Aug. 29, 2016) Last November at a town hall event in Greenwood, S.C., a former undocumented migrant challenged Biden about his record of deportations. Biden’s response? “Vote for Trump.” Biden will not dismantle the very machine he helped build.

This summer has seen unprecedented Black Lives Matter protests and rebellions across the country in the wake of the Minneapolis police murder of George Floyd. While many revolutionary forces, including Workers World Party, advocate abolition of the police, the more mild demand to defund the police has gained wide circulation, even among moderate forces. Has Biden promised to take up this mandate and push back against racist police brutality? He made his position clear in a June 10 opinion piece in USA Today: “I do not support defunding the police.”

Trump has deployed federal agents to a number of cities in response to the protests, a move widely decried as a step toward a police state. Biden has engaged in a bit of doublespeak, opposing the deployment while also saying “anarchists should be prosecuted.” This statement criminalizes people for holding a particular political perspective, and offers a way for the ruling class to target its opponents as “anarchist” and arrest them. While condemning Trump, Biden actually endorses the principle of Trump’s policy.

Bill Clinton was elected president in 1992 after 12 years of Republicans Ronald Reagan and George H.W. Bush. Reagan had greatly expanded the racist “war on drugs,” leading mass incarceration to grow by nearly half a million, the majority Black, Brown and/or Indigenous. This trend continued under George H.W. Bush.

When Democrat Bill Clinton took office, did he reverse course? Just the opposite. The incarcerated population grew by an incredible 650,200, the largest increase in U.S. history. A major force behind the continued incarceration was the 1994 Violent Crime Control and Law Enforcement Act, the Democrats’ attempt to meet and exceed the Republican Party’s “tough on crime” image.

Which Senator took the lead drafting the bill? None other than Joe Biden. While working and oppressed people are out in the streets as never before, the Democratic Party has chosen to put forward a senator who oversaw the greatest incarceration of Black people since the Civil War, with a prosecutor – Kamala Harris — as his running mate. Can such a ticket be expected to listen to those in the streets — or repress them?

Trump and the Republican Party’s decision not to extend the federal $600/week unemployment benefits, despite record joblessness resulting from their failed response to the COVID-19 pandemic, is an appalling act of cruelty.

Biden has not demanded resumption of the $600/week benefit, instead offering a vague program of “employment insurance.” Nor has he pushed for undocumented migrants to receive benefits.

This refusal to stand firmly behind direct cash payments to address poverty is not new for Democratic presidents. While Republican Ronald Reagan rode the racist myth of the “welfare queen” to the presidency, it fell to Democratic President Bill Clinton to actually dismantle Aid to Families with Dependent Children in 1996. In its place was the meager Temporary Assistance for Needy Families (emphasis on the “temporary”). Biden, a senator from Delaware at the time, voted for this reactionary “welfare reform” and has avoided standing behind or disowning that vote ever since. (nbcnews.com, Feb. 10)

Examples of Trump’s militarism are too numerous to count, but a selection should include: saber-rattling at Iran, including the drone assassination of Iranian General Qasem Soleimani; a trade war and escalating tension with China; an attempted coup and debilitating sanctions on Venezuela; rejection of Iraq’s demand that U.S. troops be withdrawn; major increases in the military budget; support for the genocidal Saudi blockade of Yemen and the Israeli genocide of Palestinians; and sanctions and threats of military force against People’s Korea.

Will Biden take a different course? He has actually criticized Trump for being soft on China and People’s Korea. He supported the 2003 invasion of Iraq, sanctions on Iran, U.S. coup attempts and sanctions against Venezuela, and is a long-time promoter of Israel.

This similarity between the two main capitalist parties when it comes to war is not new. George H.W. Bush presided over the 1990 U.S. invasion of Iraq, but Clinton, with Biden’s support, then continued a brutal regime of sanctions that were responsible for the deaths of more than 500,000 Iraqi children. Democratic Secretary of State Madeleine Albright said these deaths were “worth it.”

Similarly, the Obama/Biden administration continued the wars in Iraq and Afghanistan, backtracked on a campaign promise to close Guantanamo Bay, began a $1 trillion modernization of the U.S. nuclear weapon arsenal, and carried out coups in Honduras and Libya, creating migration crises that continue to this day. Libya was transformed from the most prosperous country in Africa into a place where enslaved people were publicly auctioned off.

Supporting Medicare for All seems like a no-brainer during an unprecedented public health crisis that has already killed over 160,000 people in the U.S., with millions of workers laid off as they no longer receive irrational employer-based health insurance. An April poll showed 69 percent of registered voters support it. (Newsweek, April 24)

But Biden stands with Trump and the insurance industry in rejecting this basic step to improve healthcare access. In the face of that position, anything Biden suggests in response to COVID-19 rings hollow.

Deep disgust at Trump’s blatant misogyny and admitted serial sexual abuse of women ignited one of the largest days of demonstrations in U.S. history: the 2017 Women’s March. But what about Biden? Numerous women have accused him of sexual assaults and inappropriate behavior. Asked about allegations by Tara Reade, a staffer for Biden in the early 1990s, he denied them and responded: “If they believe Tara Reade, they probably shouldn’t vote for me.”

If reelected, Trump has promised to end the payroll tax responsible for a major share of Social Security’s funding. (americanprogress.org, Aug. 12) Will Biden protect this crucial program? He has repeatedly advocated cutting Social Security since the 1980s, as detailed in a Jan. 13 piece in The Intercept

Biden tells on himself

At a posh Manhattan fundraiser in June, Biden summed up what to expect from his presidency: “Nothing would fundamentally change.” If that weren’t enough, he had kind words for Sen. James Eastland of Jim-Crow-era Mississippi, who once said, “What the people of this country must realize is that the white race is a superior race, and the Negro race is an inferior race.” When Biden praises white supremacists of the past, why expect him to fight white supremacy today?

As the crisis of collapsing U.S. imperialism pulls the country ever farther to the right, the record makes it clear we should not count on Biden, or the Democratic Party in general, to save us. We have it straight from the horse’s mouth when Biden says: “Nothing will fundamentally change.”

While the loyalty of the Democratic Party is to the ruling class, the sheer grotesqueness of Trump’s white supremacist rhetoric and policies will make many feel that they must vote for Biden, regardless of his record. In any case, the ever-worsening crisis of U.S. imperialism will not be addressed in the voting booth on Nov. 3.

Instead, working and oppressed people will address U.S. imperialist domination on Nov. 4 when once again we take to the streets. And on the next day when residents in a neglected neighborhood organize a tenants’ association, when a teacher demands a safe learning environment for their students, workers at a hospital fight for private protection equipment and the best care possible for their patients, when a community mobilizes to stop an eviction, people will fight on inside and outside the U.S.

When a demonstration says “No War on Iran,” when a Committee for the Defense of the Revolution meets in Cuba, when a commune in Venezuela distributes food in the face of U.S. sanctions, when a Palestinian resists Israeli occupation, when the New People’s Army in the Philippines recruits new members, when Vietnam’s public health system continues to protect its people from COVID-19, when a soldier in People’s Korea trains to defend her nation against U.S. imperialism, and when the People’s Republic of China yet again lifts thousands out of poverty.

Working and oppressed people can rely only on ourselves — armed with our dual weapons of solidarity and organization to counter the move to the right and defeat this horrific, rotten, racist, mysogynist, ableist, homophobic, transphobic system. That will remain the case whether a capitalist donkey or a capitalist elephant walks into the White House in January.

On every single day working and oppressed people will organize and resist until we have tossed capitalism into the dustbin of history.