“[T]here were two or three years there where the movement went a little too far toward … [Kwame Ture], but in the end, John Lewis prevailed.”

Those words were spoken at Rep. John Lewis’s funeral on July 30 by President Bill Clinton, one of the architects of the 1994 crime bill and the former leader of the most violent imperialist country on earth. 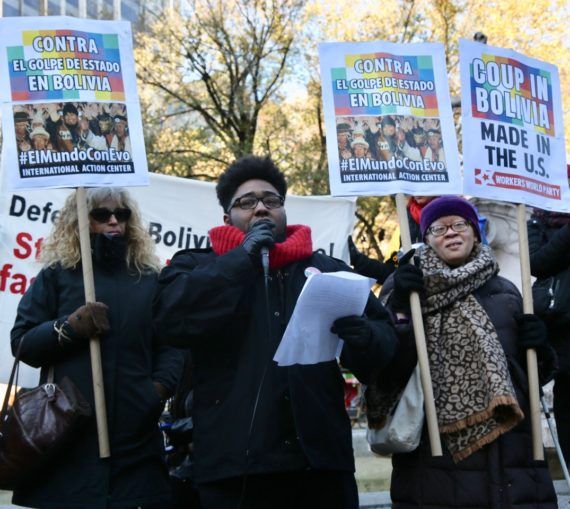 His comments were a pointed attempt by a white servant of capital to dampen the revolutionary fervor of a new movement for racial and economic justice. He said this because, as in 1966, we again stand at an inflection point in history. We are yet again faced with a similar choice between Ture and Lewis. And yet again, the capitalists who seek to police the Black struggle are terrified that the masses will embrace the justified rage that has ebbed and flowed for centuries and transform that rebellious tide into a revolutionary flood. The ruling class is afraid, but what can they do?

Police brutality is a favored option. The police are the frontline guards of the capitalist ruling class, and as we have seen since a countrywide uprising was sparked by the lynching of George Floyd, they are always the first to step forward and use force against the most oppressed segments of the working class. But the police don’t actually stop an uprising with force; they stop it with fear.

In any mass demonstration, the police are always wildly outnumbered. Even with their protective gear and crowd-suppressing weaponry, any suitably motivated grouping of rebels could easily overwhelm the police so long as they had the confidence to do so. That’s why the police use fear to rob the masses of their confidence. The police make brief, but spectacular displays of violence to shock and dishearten the masses. When the people hesitate, the police rush forward. When the people scatter, the police have won.

But demonstrators in Minneapolis, Portland, Ore., Brooklyn, N.Y., and numerous other cities have gone off-script. The sacking of the Minneapolis 3rd Precinct was startling evidence that the masses were losing their fear and the police were losing ground. But the capitalist ruling class has developed other tactics for maintaining oppression. Overseas, through the predatory wars of exploitation in Vietnam, Iraq and Afghanistan, the imperialists have developed a theory for dealing with rebellions (which they refer to as “insurgencies”). Their counterinsurgency tactics rely on developing an attitude among the oppressed population of passive tolerance of imperial occupation.

To put down a rebellion

The imperialist tactics sharpened abroad have made their way home to control the oppressed peoples within the borders of the U.S. The chief goal of counterinsurgency doctrine is to manipulate public opinion and to channel the rage of the masses into outlets which do not threaten the established systems of exploitation. This requires an army of on-the-ground organizers, nongovernmental organizations and religious leaders — all ideally members of the oppressed communities themselves — who can show up at any demonstration or organizing meeting to redirect and misdirect the activities of those who are new to the struggle.

This manipulation extends also to a total saturation of the media. Prior to the George Floyd-inspired uprising, the capitalist press treated the Black Lives Matter movement as an inconvenient sideshow, suppressing their demands whenever possible. But when the movement bared its teeth, the press immediately fell in line, full-throatedly declaring that “Black Lives Matter” and that all people of conscience should support nonviolent protesters. That caveat, of course, is key.

In the capitalist press, the words “nonviolent” and “protester” are always seen together. The use of this formulation is yet another tool of the ruling class to sow division, to seemingly show support for the movement — and thereby give hope to those who might believe negotiation with the state is still possible — while condemning those who defend themselves from the violence of the police.

Amidst an uncontrollable mass movement that explicitly condemns law enforcement, it might seem to be a political blunder for a presidential candidate to select a former prosecutor and state attorney general as their vice presidential nominee, especially one with a record as ruthlessly carceral as Harris’s.

But Joe Biden is a leading servant of the capitalist ruling class and his first goal is not winning the election, but doing his masters’ bidding. To defeat a movement such as ours will require a heavy-handed response from law enforcement — not just the police, but local and federal law enforcement. For that, Harris’s experience makes her perfectly suited for the role of vice president.

It would be an error to view the Harris nomination as meaningless because of the usually ceremonial role played by the U.S. Vice President. Joe Biden is an incompetent fool with a record of blatant plagiarism, outrageously inappropriate off-the-cuff comments and two embarrassingly disastrous presidential runs.

He exists where he is now due to white privilege, an unflinching willingness to serve the interests of the war industry and credit card companies, an easy smile, and the absolute desperation of the ruling class to undermine the Bernie Sanders campaign.

Compounding Biden’s intellectual inadequacy with his repeated signals that he will be a one-term president — along with the need for a competent leader to suppress the masses — the selection of his VP is of the utmost importance. Make no mistake: Should Biden win in November, Kamala Harris will be, after Dick Cheney, the most powerful vice president in the last hundred years.

Kamala Harris is a key player in the ruling class’s strategy to maintain the capitalist order during a monumental Black uprising. Imagine for a moment if she were white. Imagine if she were a man. What would the reaction of the masses be to the selection of a 55-year-old white male prosecutor for the second highest office in the country?

There would be no doubt that such a candidate was put in place as a direct check on the newfound power of the masses. In such a situation, it would be clear that the selection of a prosecutor was a signal that the ruling class sought to bring down the hammer of the U.S. legal system in order to smash the rebellion.

That is why Kamala Harris is so perfectly cast. And we should be clear that a capitalist election is nothing more than a casting call for potential administrators of the capitalist machine. To have an experienced, intelligent and ruthless prosecutor like Kamala Harris, who is also Black, South Asian, a woman and the daughter of migrant parents, is a huge boon to the capitalists.

Harris’s representation of oppressed groups acts as a scalpel, surgically carving divisions within the working class. The capitalists have no shame in playing on the hopes of oppressed people who, seeing someone like them reach the heights of power, might dare to hope that their oppression would soon be alleviated. The cynical ruling class knows this. They know that having a woman of color as the administrator of capitalist exploitation will cause confusion and hesitation among the masses, that it might convince some to wait or negotiate or give the benefit of the doubt to a system that does not deserve it. This was true with President Barack Obama.

But regardless of who operates the exploitative U.S. capitalist system, it is primarily a racist, patriarchal system of exploitation. A system that destroys the lives of people of color for profit. A system that underpays women and gender-oppressed people and denies them bodily autonomy to increase stock prices. A system that has, and always will, work for the benefit of wealthy white men. This is the true face of the machine. Kamala Harris is merely the brutal machinery of state repression clad in blackface.

The law as warfare

Napoleon Bonaparte advised rulers to hide their iron hand in a velvet glove. When Trump came into office, he brought with him the vile neo-Confederate Jeff Sessions as Attorney General. Sessions tirelessly dismantled the meager and wholly inadequate protections established by the Civil Rights Division of the U.S. Department of Justice.

Sessions’s only goal was to remake the Department of Justice into an iron hand with which to swat the movement for Black Liberation. Anyone who believes Harris will attempt to undermine Sessions’s work will be sorely disappointed. She will instead act as a velvet glove, covering the repressive innovations of the Trump administration with a soft veil of legitimacy.

Harris will no doubt make a show of publicly putting the most egregiously violent police departments under toothless consent decrees — as the Obama administration did before her. But she will also quietly use her years of experience in tossing human beings into cages to further develop the means by which both state and local prosecutors can harass, contain and destroy Black radicals. We’ve already seen absurd, draconian prosecutions leveled at demonstrators. We can only expect this to continue under the stewardship of a veteran prosecutor.

As Bill Clinton revealed, the ruling class is afraid. They are looking to Kamala Harris as their last hope. They believe that the masses can be fooled into curbing their resistance because a member of an oppressed class and group has been allowed to wield the tools of oppression. This strategy failed under President Obama, and it will fail again if Vice President Harris is elected.

The Black Lives Matter movement was born under the Obama administration. It was born because the oppressed masses understood that the race of the president had no material impact on the violent exploitation they faced everyday in their communities. The oppressed masses also understand, more and more each day, that their power comes from their numbers, and any attempt to divide them must be dismissed out of hand. Kamala Harris can’t stop the rebellion, no more than you can stop the tide from coming in.