At 2:15 p.m. on Friday, Aug. 14 — as the first week of in-person classes at the University of North Carolina wound to a close — the independent student newspaper, the Daily Tarheel, made the announcement: “BREAKING: Carolina Housing reported two COVID-19 clusters today.” 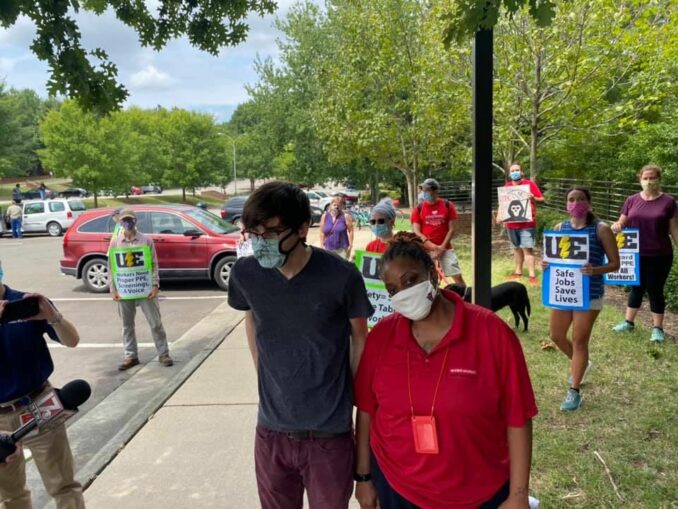 The UNC-Chapel Hill administration’s communications team finally acknowledged the spread of infection half an hour later and issued a campus alert.

The administrators had spent months fighting students, workers, local and state governments, the N.C. Department of Health, virtually every local community group — and the very concept of human dignity — to push forward an in-person reopening.

The University of North Carolina, a statewide system of 16 colleges and universities, wields considerable indirect power over the entire higher education sector in the state. This is reflected in the in-person openings underway at nearby private schools Duke University and Elon College.

The UNC System is the largest employer in North Carolina — the only state in the South where Walmart is not the largest employer. The system operates five Historically Black Colleges and Universities and the state’s only historically designated  Native university. The system directly employs around 45,000 workers and many more contractors, teaches 240,000 students, and has a much-multiplied total economic impact.

The unelected Board of Governors is mainly made up of generationally wealthy white men in financial and real estate industries, all steadfastly loyal to the white nationalist vision of the North Carolina Republican Party. The board exercises complete institutional control over the state’s higher-level public schools.

The massive UNC schools similarly exercise significant control and influence over the cities and counties where they are located — many of these predominantly Black, Latinx and/or Indigneous communities.

In the middle of the COVID-19 pandemic, the UNC Board decided that the lives and well-being of workers and students were unimportant. Against all recommendations, and with many alternative options, the board ordered in-person instruction would resume in the fall semester.

Fortunately, before the school reopening, the ambitious Safe Jobs Save Lives Campaign of the Southern Workers Assembly was raised up in the UNC System by the North Carolina Public Service Workers Union, United Electrical Workers Local 150 (UE150),  along with community groups and the N.C. chapter of the American Association of University Professors. AAUP is the professional association that operates as a union at the college level. This is particularly useful for education workers in states with “right-to-work-for-less,” Jim Crow-era laws that ban public sector worker collective bargaining.

For months the campaign put out a vision for a safer UNC: safer conditions on the job for essential workers, from hazard pay to personal protective equipment; solidarity with international workers who are under threat from Immigration and Customs Enforcement as well as COVID-19; and demands for students, instructors and communities to move instruction online and open campuses only when safely possible.

No stranger to the struggle with the UNC System, UE has fought austerity programs that have harmed education workers and their universities for years. To its credit, UE won a $15 minimum wage for state workers in 2017.

UE workers predicted both the current spread of COVID-19 on campus and the administration’s complicity in that. On July 17, UE hosted a Town Hall for workers and student organizers throughout the UNC System.

UNC groundskeeper David Branagn said: “One thing that struck me is that no one seemed to be paying any attention to the increased vulnerabilities of our housekeepers, our Black workers, especially Black women, our Latinx workers and Asian workers. … That is absolutely immoral.”

Said Lakisha Morgan, UE 150 member and housekeeper at North Carolina State University: “There needs to be some sort of initiative taken where we can understand what’s going to work. There should never be a situation where someone wakes up to the news that there is a COVID-19 outbreak in their workplace. That’s unacceptable.”

After the Town Hall, UE followed up with direct actions around the state, including during dormitory move-ins, marches on the administration and petition deliveries. Now a class action lawsuit is underway.

Jermany Alston, UE150 steward and housekeeper at UNC-CH, is the lead plaintiff: “We bring UNC the concerns, and the administrators say they’re going to fix it, but nothing ever comes of it. It gets swept under the rug. Workers are scared to complain about what’s going to happen to their health. UNC doesn’t care about us; they just want us to be here to work. It’s wrong. UNC doesn’t care about us, but we are here helping them out, and we could put our families in jeopardy. Something needs to be done.”

It will be sometime before the suit is resolved, and labor law is stacked against workers in the state. Meanwhile, UE and workers are rising to the challenge to defend themselves and their community.

All around North Carolina, workers united are saying, “Safe Jobs Save Lives!”