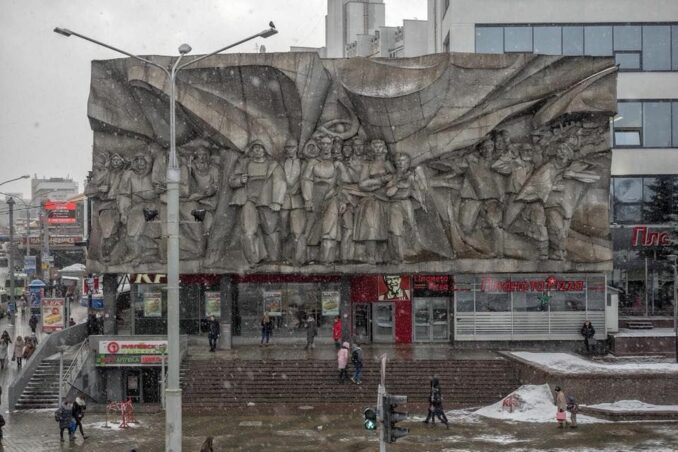 U.S. imperialism and the Western bourgeois media, however, wasted no time in denouncing Lukashenko’s victory as Secretary of State Mike Pompeo used saber-rattling language against Belarus by claiming the election was not “free and fair.” (Reuters, Aug. 10)

Since the mid-1990s, U.S. imperialism has targeted the Belarus government, which has had cordial relations with other anti-imperialist governments, such as Venezuela and Zimbabwe.

Lukashenko’s main electoral opponent, Svetlana Tikhanovskaya, who polled around 10% of the vote compared to Lukashenko’s 80%, refused to accept the election outcome. Her supporters and other opponents of the government from various centrist and right-wing parties, poured into the streets to denounce Lukashenko.

Shortly after protests started, demonstrators violently clashed with the police. Internet images have shown many of the demonstrators waving the anti-Communist red and white flag used by the Byelorussian Central Council, which collaborated with German Nazi occupiers from 1943 until 1944. The same flag was also flown by Belarusian counterrevolutionaries during the collapse of the Soviet Union in the early 1990s.

In 2014 a NATO-sponsored coup succeeded in overthrowing Ukrainian President Victor Yanukovych. Pro-Western, anti-Semitic Ukrainian nationalists, including pro-fascist elements inside the “Maidan movement,” carried out this coup. At the time, Lukashenko warned the people of Belarus about such a movement developing there.

Today, Ukrainian fascists are openly lending their support to the Belarusian opposition movement.

Tikhanovskaya’s spouse, Sergei Tikhanovsky, initially intended to run against Lukashenko, but he was disqualified and arrested for participating in illegal, anti-government activities. Tikanovskaya became the main opposition candidate after his arrest. Corporate media reports that Tikhanovskaya fled to Lithuania on Aug 11.

The only political party that Lukashenko ever belonged to was the Communist Party of the Soviet Union. According to Parker, “Lukashenko’s positive opinion of the USSR, as well as the preservation of Soviet national holidays and a rejection of nationalism, have all found favor with the older generation.”

Despite the capitalist counterrevolution in 1991, Belarus was able to restore some of the socialist programs of the Soviet era. Parker points out that the first thing Lukashenko did upon election was double the minimum wage. All education is free, including higher education.

Parker adds, “Communist and socialist governments the world over have always had literacy and education programmes as core principles. Belarus has continued in this tradition. This is in stark contrast to the decline in public service spending in the other former Soviet republics.

“Maternity leave in Belarus is also extended to those who adopt babies. … Few Belarusian pensioners will have the luxury cars or the latest computers, but they will be able to afford food, fuel and the essentials that allow them to enjoy a peaceful retirement. Belarusian life expectancy is higher than in all former Soviet states with the exception of Georgia.”

Imperialist threats to sovereignty and stability

Belarus’s government has its contradictions. While Belarus still maintains features from its socialist history as part of the Soviet Union, it lost other socialist features during and after the USSR’s collapse. The people have some legitimate grievances against Lukashenko, especially regarding his response to the COVID-19 pandemic.

Taking advantage of these grievances, Washington and the Belarus opposition use problems caused by the pandemic as a pretext against Belarus’s sovereignty — despite the U.S. government’s own mishandling of the pandemic crisis.

As of this writing, the opposition’s future is still hazy. What is clear, however, is that Lukashenko’s opposition welcomes support from the pro-fascist Maidan movement in Ukraine and from U.S. imperialism. This makes the Belarus opposition similar to the pro-capitalist protesters in Hong Kong, which U.S. imperialist politicians and Western white supremacists embrace.

Anti-imperialists and revolutionaries inside the U.S. must oppose any U.S. involvement in other countries’ affairs. Washington’s policies aim at instability in Belarus. Ukraine’s Maidan movement encourages a pro-fascist coup. These are both a threat to Belarus’s workers.

The author dedicates this article to the memory of Workers World Party founder Rosemary Neidenberg (1921-2020), who requested that he analyze U.S. imperialism’s threat to Belarus.