Workers around the world are demonstrating against their governments’ policies in dealing with the COVID-19 pandemic. From South America to Asia, political protests and strikes are taking place. In many countries, health workers are in the lead, as they are on the front lines in this massive medical crisis. They face great risks to their own health, with fatalities increasing. 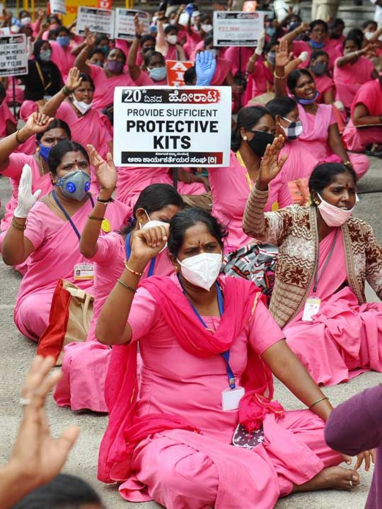 India, with 2.26 million people stricken by COVID as of Aug. 10, has the third largest number of cases after the United States and Brazil. The number is growing daily. Furious at the Narenda Modi-led government’s inadequate response and failure to contain the pandemic, 3.5 million workers, led by health care workers, struck for two days, Aug. 7-8. They called for higher and timely pay, a guaranteed minimum wage and a pension. Strikers also demanded the government treat them with dignity and respect.

At least 100 health workers in India have died from COVID; hundreds are getting sick daily. The strikers emphatically voiced concerns about their personal safety and insisted the state provide adequate personal protective equipment. Moreover, workers called for government-assured insurance payouts to deceased workers’ families, which have not been disbursed.

Some 600,000 members of the all-women Accredited Social Health Activists led the job action. They are the workers who travel to low-income, rural areas to provide essential health care, such as maternal care and vaccinations, where there is little to no access to medical facilities.

Although they play a vital role in the country’s underfunded public health system and are on the front lines in the effort to contain the pandemic, the government has ignored these workers’ demands. Treated as “honorary volunteers,” they are not even covered by state minimum wage laws, although they provide public health programs!

ASHA members are the frontline workers doing door-to-door checks and tracing virus cases, facing geographical and climate hazards on their way. They must often maneuver their way on foot through mountains to distant regions, even having to cross rivers by boat and rope bridges during rains.

As the coronavirus spreads to rural areas, the public health care sector is increasingly overwhelmed. In a country of 1.3 billion people, with virus hotspots in many locations and 50,000 new cases reported daily, the burden of contacting the population and tracing the disease falls on these frontline workers.

Working 10-hour days under incredibly difficult working conditions for $27 a month or less (!), with many not receiving the promised doubling of their salaries, and ignored and disrespected by central and local officials throughout the pandemic, these misnamed “volunteers” were fed up!

Unions representing all sectors and peasant organizations came out in 21 states in this All-India walkout. Under threat of firings and arrests, the strikers, mostly women, defied the Modi government. With this great show of solidarity, the demonstrators’ numbers swelled to 3.5 million.