This article is a lightly edited version of a talk given Aug. 6 during the Workers World webinar entitled, “War on the Working Class: a Socialist Response.”

I’d like to talk about another country’s response to the new coronavirus. The steps it has taken to protect its workers’ health show that what we’re going through now in the United States and what so many people on this webinar have already spoken of very eloquently doesn’t have to be this way. It’s not necessary; it’s not inevitable. It could be another way.

For every million people in Cuba, 8 have passed away from COVID-19, while for every million in the United States, 488 people have died. This makes the U.S. death rate 61 times higher!

That’s a pretty incredible disparity, especially when you consider that the U.S. is one of the wealthiest countries in the world. Cuba, on the other hand, is not a terribly wealthy country. It has endured decades of economic privation, due to the U.S. blockade that prevents Cuba from conducting trade with not only the U.S. but many other countries around the world. That’s because of the extraterritorial nature of the blockade and the influence the U.S. holds in the international banking system.

So why is it that this small, relatively poor country has such a lower rate of deaths from COVID-19 than the U.S.? The answer is simple. It’s because Cuba is a socialist country. Instead of the anarchy of capitalist production we have in the U.S., Cuba has a planned economy — one organized for the benefit of its people.

It means that during the coronavirus pandemic, Cuba can shut down international flights. Almost no international flights are going into Cuba right now. The government has decided to prevent the substantial tourist industry from bringing COVID-19 cases onto the island in large numbers.

That’s a real sacrifice because tourism is a major component of the Cuban economy. And it just passed through one of the busiest tourist seasons. But Cuba was able to do that while providing for its people because it has an economy planned for the benefit of its people.

When more than 5 people on a block contract COVID-19, that block and all the blocks around it are put under quarantine. If it’s a small village, the entire village is quarantined. Food, personal protective equipment, medical supplies and whatever else is needed are delivered to the people affected. Everything is provided for.

If people in a large city fall ill, they can go to quarantine centers where they and their families can live safely and receive retrovirals such as Interferon alfa 2b, which has the potential to reduce the symptoms and lethality of COVID-19. This medication is not available in the United States because of the blockade.

Cuba has an enormous public health system that makes it able to do contact tracing. Why? Because Cuba invests its resources in public health. Whereas here in the United States, the ruling class demands government resources be invested in 800 military bases around the world. 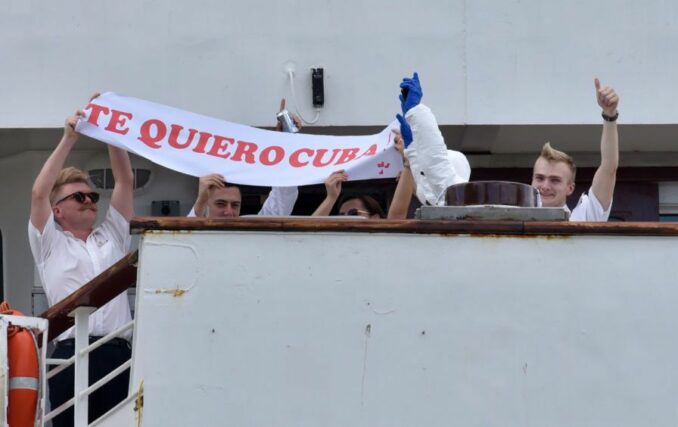 A sign held by crew members reads “I love you, Cuba’’ as the British cruise ship MS Braemar finally docks there on March 18. Cuba was the only nation that helped the ship, using strict pandemic prevention protocol to assist more than 1,000 passengers and crew members to return to England. Of Cuba’s response, the country’s foreign minister, Bruno Rodríguez, said. “Let’s reinforce health care, solidarity and international cooperation.”

This kind of collective action is often aggressively rejected in the United States with its hyper-individualistic culture. Whereas Cuba is literally built on a culture of collective action, devoted to creating a better society for all in the face of continuous economic, political and even military attacks from U.S. imperialism.

Right now in many parts of the U.S., 30% to 40% of renters are behind on the rent. An enormous, really inconceivable number are facing eviction in the coming months.

In Cuba, zero people are facing eviction. Why? Because in 1959, after the victory of the Cuban Revolution, land reform ensured not only that the landless peasants in the countryside would receive the land they had worked for wealthy landowners (who now live in Miami), but that all the people in the cities would receive ownership of their housing. The vast majority of Cubans own their own housing. Nobody is worried about an eviction, and if anybody falls ill, a system is in place to care and provide for them.

Workers World Party has been putting out demands in response to this crisis. Demands that are winnable and possible, like workers’ control over the means of production. Like socialism itself, these are things we can achieve through organization and struggle.

We are demanding free health care for all. Nationalize the health care system under community control. Build emergency hospitals. Full pay, benefits and guaranteed income for all.

Food, housing, medical supplies and utilities, including internet, for all. Unequal access to the internet is a major issue as the necessity of long-distance learning goes forward.

We need to suspend rent, evictions, mortgages, utility shutoffs and all debt. We need to prioritize resources for communities of color — and for the migrant community, which has received none of the stimulus benefits, meager as they are, that have been doled out by the government to LGBTQ2S+ people, seniors, youth and people with disabilities.

These most oppressed sectors of society have to be prioritized in response to the pandemic, not ignored.

We need to empty the prisons and detention centers right now. A prison sentence is a death sentence during a pandemic. We need to shut down Immigration and Customs Enforcement and end racist attacks.

We need community control, not the cops and the military running everything. The $2 trillion the government handed to the banks must be given instead to the workers. And finally, we need to end U.S. wars, sanctions and environmental destruction.

Cuba’s socialist health care system is not a fantasy. The Cuban Revolution is real and happening 90 miles off the coast of Florida. If it’s possible there, it’s possible here.