When federal officers entered Portland, Ore., over the July 4 weekend and began to confront Black Lives Matter protesters, it quickly became clear that the protesters were not going to be driven out.

The presence of federal officers only galvanized protesters, who turned out by the thousands night after night. Militant demonstrations and broad support from the community were met with heavy clouds of tear gas and heavy-handed, repressive responses from federal officers. The kidnapping of protesters into unmarked vehicles by unidentified agents in Portland became a flashpoint for outrage against state repression throughout the U.S. 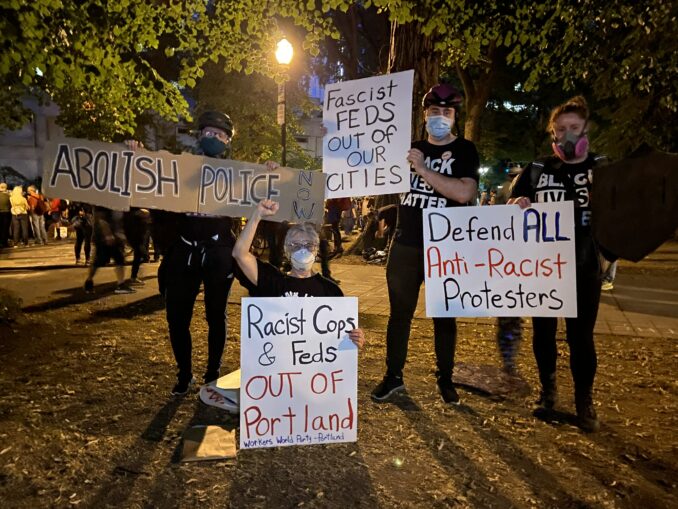 Tents were set up in Lownsdale Square, directly east of the federal courthouse where federal officers had centralized their operation. For weeks protesters at the square continued to offer free food, medical aid, water, clothing and other supplies donated by the community.

Finally, after massive demonstrations, Oregon governor Kate Brown announced that on July 23 federal officers would begin withdrawing and would be replaced with Oregon state police. This represented a clear, but qualified victory for the protesters.

Since the drawdown began, the area around the protests has been markedly more quiet, with no further use of tear gas reported. But the tents in Lownsdale Square were taken down by city authorities, and the square was cleared.

Protests have continued, as not all federal officers are believed to have left the city. The state police replacing them aren’t necessarily viewed more favorably by many of the protesters. The Portland Police Bureau — which deployed tear gas nearly 100 times during protests that began after the May 25 murder of George Floyd — is similarly held in contempt.

Portland Mayor Ted Wheeler, who is also the city’s police commissioner, has now apologized for his authorization of the unrestrained use of tear gas against protesters. This came only after the mayor and other local officials were themselves teargassed by federal officers.

A broad coalition — made up of social justice organizations, radical activists, trade unionists, teachers, medical workers and concerned residents — continues to turn out and demand racial justice in support of Black Lives Matter. While there have been disagreements within the movement over tactics and other issues, the unity of this coalition has been the key to its success.

The overall political discussion has shifted as a result, with demands for defunding and even abolishing police becoming much more widespread and accepted. Many local officials have felt the pressure of thousands of demonstrators in the streets and are realizing that business-as-usual cannot continue.

Thousands of people participated in a march over the Aug. 1 weekend, making their way for miles through the city’s eastside into downtown. Large demonstrations were held at Portland’s waterfront park, with people later converging in front of the federal courthouse several blocks away. During the weekend, firefighters also staged a demonstration in support of the movement.

Federal and local officials seem to have come to terms with the fact that the protests cannot be quelled through repressive violence alone and that attempts to do so will only embolden the movement, now well over two months old.

The only path forward for the movement is to increase unity and draw in more and more segments of society. It must continue its momentum and consolidate its gains, while pushing the struggle further and further forward.

Many speakers at the protests have connected the Movement for Black Lives to an anti-capitalist political stance that advocates for demands like universal health care and housing for all. Until the basic necessities of life are guaranteed for all, all lives will not matter, especially Black, Brown and Indigenous lives.

This becomes even more clear in the context of the coronavirus pandemic, which disproportionately impacts Black, Brown and Indigenous communities and underscores the need for universal, not-for-profit health care. The mounting eviction crisis will also make this point more clear: The system of capitalism will not and can not meet even the most basic needs of the people, especially the needs of the most oppressed.