Aug. 3 — Talks between the Republican administration and its majority Republican Senate with the Democratic Party House and Senate leaders have failed so far to reach agreement. This impasse holds up the emergency relief, which  Republicans call CARES-2, beyond the date when vital unemployment supplements expired and the rent and mortgage moratorium ended. 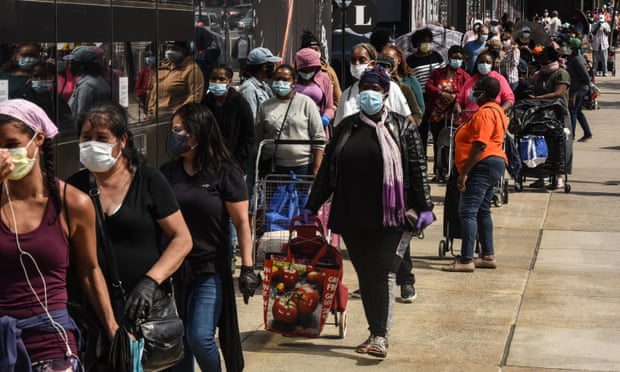 People wait to receive help at a food bank distribution in New York City in May.

Months ago, the Democratic House passed a relief plan they called the Heroes Act, valued at about $3.4 trillion. The Republican side dragged their feet for two months and now has barely agreed on their own plan, whose meager total value of only $1.1 trillion itself shows its inadequacy.

People fear this pandemic, and with good reason. As August begins, COVID-19 cases are spreading faster in most of the U. S. than they did last spring. Whatever state governments decide about opening or closing business, the COVID-19 spread will impede much economic activity.

This means the need for emergency relief is greater than in March for what are now tens of millions of unemployed workers, who, along with their families, face eviction, hunger and COVID-19.

Compare noncapitalist China, Cuba and Vietnam, for example, where in early August, COVID-19 is under control, with rampant unregulated capitalism in the United States, Brazil and most of India where its spread is unchecked.

While the need to fight for socialism provides a beacon revolutionaries can aim for, the immediate struggle over the relief package is taking place in the U.S. Congress between the two pro-imperialist, pro-capitalist parties that represent the U.S. ruling class.

That this conflict takes place in the midst of an election year battle where — if anything near a normal election takes place, something that seems unlikely — the Republicans face the potential loss of the White House and the Senate, along with the House of Representatives. That makes it even more significant and revealing that the Republican proposals provide so little.

The message is that the Republicans are willing to allow unemployed workers to sink into despair and chaos rather than aid them. They cater instead to the biggest capitalists and base their election drive on Trump’s racism, misogyny and xenophobia.

One thing the Democratic and Republican party proposals agree on is renewing some version of the $1,200 one-time “stimulus” payment doled out last spring. Trump maneuvered to get his name on the checks’ memo line to take credit for payments that were mailed, and he will likely find a way to claim credit for this payment.

The biggest battle looms over the Democrats’ proposal to extend the $600 per week supplement to unemployment insurance for the rest of the year. This payment has kept tens of millions of unemployed workers and their families from economic catastrophe. But those payments expired last week.

The Republicans now propose paying only a $200 a week supplement. They say no one should get more than 70% of their salary. This payment is inadequate for keeping the economy afloat, not to mention the workers. It reinforces the inequality of U.S. capitalist society — which means it reinforces racism, misogyny and other forms of bigotry.

The Republicans say they don’t want to pay people more for staying unemployed than for working. Bull.

If that were really their concern, they should pass laws to raise wages for all low-wage workers — many of them “essential workers” — and all who contribute to society with their labor. Republican politicians speak the thoughts of capitalists, who grab the profits produced by the workers, and the executives whose salaries skyrocket when they cut workers’ wages.

Republicans also refuse to extend the moratorium on rents and mortgages that ended on July 25, after 120 days in force. If Congress fails to extend this moratorium and fails to extend the unemployment supplement, the likely result “will be a staggering surge in homelessness unlike anything we have seen,” said John Pollock, a Public Justice Center attorney and coordinator of the National Coalition for a Civil Right to Counsel. (New York Times, July 29)

The Democratic Heroes Act also provides major funding for state and local governments to deliver needed services, for public health measures to confront the pandemic, and for increased funding for Medicaid, as well as for subsidizing public education at all levels.

Need for ‘Heroes Act’ and much more

The Democratic Party plan falls short by omitting undocumented workers from any relief— though they do much of the essential labor on farms and in construction and retail services.  They must be included. As must gig workers and any of the working population who labor beyond the bookkeeping of official capitalism. These workers are all members of the modern proletariat.

The Democratic Party, despite its Heroes Act, remains a pro-imperialist party. Along with Republicans, its majority supported next year’s $741 billion Pentagon budget, which pays the armed forces that police the world for U.S. imperialism. The Democrats backed U.S. aggressive sanctions against China, Russia and Iran and joined the conspiracy against Venezuela. No one should forget this.

Regarding this week’s negotiations, there is a risk the Democrats will agree to a bad compromise for the U.S. working class. That may avoid complete disaster and chaos, but still throw more millions into poverty, hunger and houselessness.

To survive and prevail in the triple crisis of pandemic, economic collapse and racist police repression, workers must unite to demand a program for which the Heroes Act is only a minimum.

Extend the Heroes Act to all workers, including undocumented workers. Make the corporations pay. Show solidarity with Black Lives Matter.

Easier said than done. But the Black Lives Matter movement has inspired the movement of workers and oppressed peoples through the whole world by showing what is possible, even during a pandemic. The failure of Congress to provide even the bare minimum of emergency relief may be forcing the entire working class to respond with the same energy against the same enemy – capitalism and the repressive state apparatus.