The action was a response to the threatening, dangerous demands of the White House, Wall Street and Massachusetts Gov. Charlie Baker to “get back to school and work” in September. 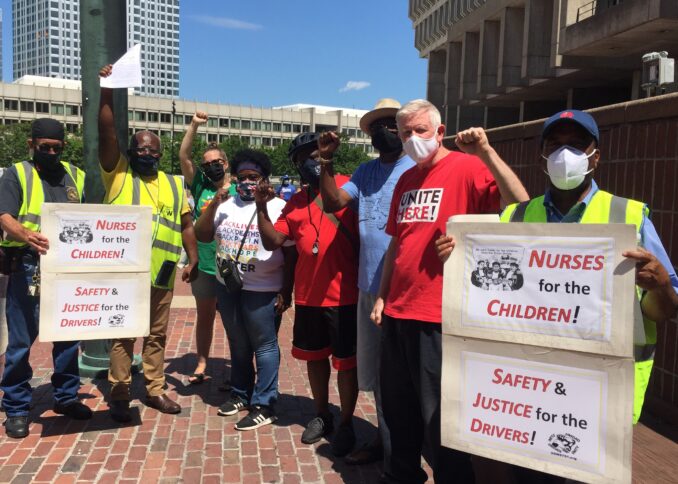 Chisholm’s legacy unified Boston’s majority-women teachers and nurses and the majority-Black bus drivers in their demand that BPS workers be decision-makers in any school reopening plan. “Our expertise and knowledge have been shut out of the assessment, planning and decision-making process,” charged Boston Teachers Union President Jessica Tang.

The crowd cheered USW Local 8751 President André François, who said that every bus driver “applauds the [BTU’s} … nonnegotiable demand for union nurses in every school.  Because the school bus is the first daily contact for tens of thousands of Boston’s most precious cargo, Local 8751 also demands BTU nurses be stationed at the bus yards to enforce safety procedures at the frontline.” 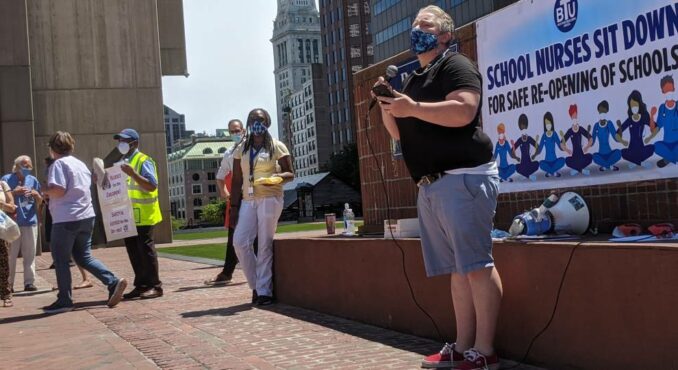 François continued, “As the pandemic spread worldwide, our employer and responsible parties failed to act, and in April, Local 8751 suffered the deaths of four drivers to COVID-19. They were active in the city’s food home-delivery program to thousands of BPS children. Only the union’s forceful, on-site intervention and job actions to enforce Emergency COVID-19 Worksite Standard Operating Procedures stopped [additional] infections among our members. … Local 8751 pledges to our members and the children, families and communities we serve: Not One More Death!” (USW Local 8751 statement, July 29)

Dr. William Hanage of the Harvard School of Public Health condemned “the hybrid option” of alternating children from school to day care as “among the worst that we could be putting forward, if our goal is to stop the virus getting into schools” (WBGH.org, July 30 )

Boston University epidemiologist Helen Jenkins told the Boston Globe that workers’ unity in not going back makes sense from a public health point of view: “I think their demands are totally reasonable,” she said. (July 29)

Warning of tragedy to come from rapid reopening, Massachusetts Nurses Association leaders showed up in solidarity with the BTU nurses. The MNA posted a Facebook statement that read in part: [The] “full and transparent collaboration BTU school nurses seek from your administration has never been more necessary,” referring to the failure of  Mayor Marty Walsh and BPS Superintendent Brenda Cassellius to involve worker experts. “We join you in your fight,” the statement concluded. (massnurses.org)

The American Federation of Teachers — the nearly 2-million-member teachers’ union not affiliated with the BTU — has also vowed to “fight on all fronts for the safety of our students and their educators,” said AFT President Randi Weingarten  during the union’s annual convention, held online July 28-30. Weingarten added:  “[I]f authorities don’t protect the safety and health of those we represent … and serve … nothing is off the table, including safety strikes.” (NPR, July 28)

The Boston bus drivers’ union joined the AFT’s resolve in its statement: “Local 8751 raises 1,000 fists of Solidarity with the American Federation of Teachers’ July 28 powerful commitment and warning to federal, state and local governments that ‘Safety Strikes’ will be the result if the workers’ health & safety demands remain unmet: No Reopening Without Safety First!”

At the rally, nurses, teachers and a bus driver echoed many other demands for health and safety protocols that would take massive emergency funding to accomplish, including universal availability of personal protective equipment and safe distancing logistics, universal virus testing, in-school worker preparation time, proper ventilation and disinfecting of facilities and buses, and universal internet and computer access. All need to happen before children can safely and equitably return to school in person.

All the unions called for mass hiring of health care workers, bus drivers and monitors, teachers, custodians, HVAC and construction workers, and day care workers. For both public employees and workers who are subjected to privatization at charter schools and transportation vendors, Local 8751’s statement demanded: “Full Hazard Pay and Benefits for All School Workers, Now!”

In the face of this growing outcry and scientific evidence, Boston’s Mayor Walsh announced July 31 that the city had cancelled plans for a full reopening of schools in September.

This is only the first of many concessions that the ruling class must make as the workers’ unions plan further actions in their newly formed and strengthened coalitions to put safety, health and the economic well-being of children, families, communities and workers first before the hell-bent surge of Wall Street profiteering.