By Kathy Durkin and Betsey Piette

The Samidoun Palestinian Prisoner Solidarity Network has called on “all Palestinians and those who stand for justice in Palestine to join together to organize the Days of Resistance for Palestine from August 7-9.” These actions are  dedicated to the memory of writer and revolutionary Marxist Ghassan Kanafani. They mark the 48th anniversary of his assassination in Beirut, Lebanon, by car bomb planted by Mossad, Israel’s brutal intelligence agency, on July 8, 1972. He was 36 years old. 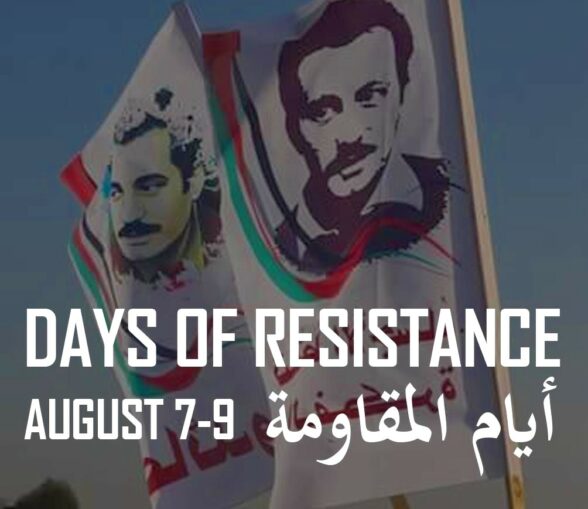 Recognized as a leading figure in Palestinian “resistance literature” — and the originator of the term — Kanafani stressed that Palestinian literature was deeply connected with global struggles against oppression.  A true internationalist, he wrote: “Imperialism has laid its body over the world, the head in Eastern Asia, the heart in the Middle East, its arteries reaching Africa and Latin America. Wherever you strike it, you damage it, and you serve the world revolution. … The Palestinian cause is not a cause for Palestinians only, but a cause for every revolutionary, wherever he is, as a cause of the exploited and oppressed masses in our era.”

Samidoun’s call explains that Israel’s dangerous program of annexation  “continues to threaten Palestinians in the West Bank, including the most fertile agricultural land of the Jordan Valley, which is still slated for Israel’s latest land grab. … This is simply the continuation of over 72 years of land theft, dispossession, apartheid and genocide — but it requires continued mobilization and action to confront, alongside the siege on Gaza, the mass imprisonment of Palestinians, the demolition of homes, the denial of Palestinian refugees’ right to return and further war crimes and crimes against humanity.”

Further, Samidoun stresses the strength of Palestinian resistance: “Annexation is a continuing threat — especially if the Israeli state thinks that it can pass unnoticed without continued resistance. The struggle is not over; in many ways, it has just begun. … It must inspire us to mobilize and organize — as Kanafani so clearly expressed — to confront imperialism, Zionism and the reactionary regimes that continue to collaborate with these forces of oppression, and to struggle for liberation. Every victory of the peoples in struggle against these forces is a victory for Palestine and for our collective victory.”

The Samidoun Network urges “all Palestinians inside and outside Palestine, and all of the national forces, popular institutions, youth, student and women’s movements, social justice movements and solidarity organizations to participate actively in ‘banging on the walls of the tank’ … to break down the walls of silence.”

Samidoun stresses: “Join in marches, popular activities, demonstrations and remind the world that the Palestinian people will continue to rise and confront all attempts of liquidation and destruction of the cause of Palestine and resist dispossession, exile and genocide — and that all people of conscience stand beside the Palestinian people in this critical moment.”

Over 70 organizations have joined the call, including National Students for Justice in Palestine in the United States, Within our Lifetime-United for Palestine, the Palestinian Youth Movement, Al-Awda, the Palestine Right to Return Coalition, The International Action Center and Africa for Palestine. Workers World Party is an endorser.

Events will highlight the struggles of Palestinian prisoners and their role in all areas of revolutionary struggle.  So far, activities are planned in Charleroi, Belgium; Manchester, England; New York City and Vancouver, and more will be announced as they unfold.

Samidoun salutes the martyrs of the Palestinian liberation struggle and calls for freedom for all Palestinian prisoners and the right of return for all refugees. The organization declares: “Victory, liberation and return will come for the struggling Palestinian people!”

For further information and to endorse, see samidoun.net. If there are questions, email [email protected]