The U.S. ruling class has increasingly turned to misinformation and propaganda to maintain control during the COVID-19 epidemic. This includes concocting imperialist conflict with China. In response, Chinese journalists have consistently pushed back. An article titled “Reality Check of US Allegations Against China on COVID-19” from Xinhua provides a comprehensive accounting to set the record straight. The document is loosely summarized below.

While Wuhan, China was the first region in the world to report the virus to the international community, it does not mean that it originated there. In fact, the origin has still not been identified. 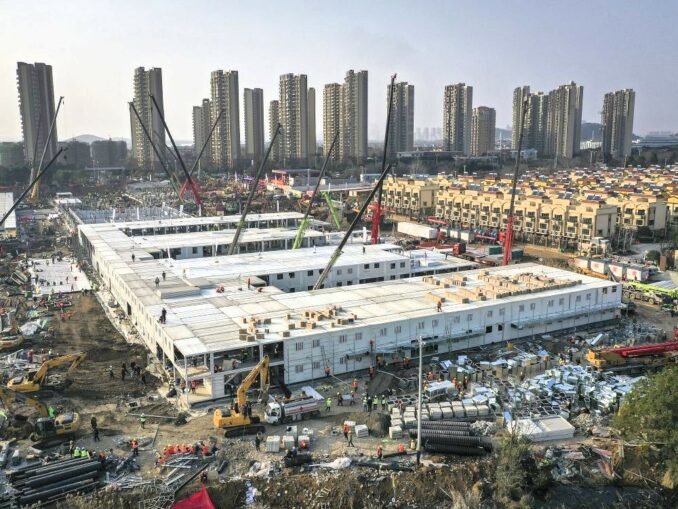 Source tracing is a serious scientific matter that should be based on science and studied by scientists and medical experts. Historically, viruses have not been first identified at their places of origin. For example, HIV infection was first reported by the U.S., yet it is unclear whether it originated there. Much evidence also suggests that the 1918 pandemic (H1N1 virus), sometimes called “Spanish flu,” did not originate in Spain.

Today, the World Health Organization has strict guidelines against naming diseases after their purported origins.

While far from conclusive about the origins of COVID-19, an article in the International Journal of Antimicrobial Agents dated June 2020 is titled “SARS-COV-2 was already spreading in France in late December 2019.” It reports that researchers found that an intensive care unit patient who had been admitted for an influenza-like illness between Dec. 2, 2019, and Jan. 16, 2020, was later shown to have tested positive for COVID-19. The patient had no link to China and had not recently traveled abroad.

To label a virus after the first location that puts up an effective response only serves to demonize responses to new diseases, especially when that label is meant to place blame.

A pandemic is a global public health emergency. There is no such thing as a “state responsibility” attached to the first country reporting cases. HIV/AIDS was first detected in the U.S. in the 1980s. It has since spread to the whole world, but the international community has never demanded that the U.S. take responsibility or pay reparations.

On May 4, one of the world’s top magazines, Nature, published a study by experts from China, the U.S. and Britain showing that the three major groups of nonpharmaceutical interventions taken by China — inter-city travel restrictions, early identification and isolation of cases, plus contact restrictions and social distancing — not only contained the spread of COVID-19 in China, but also bought precious time for the world. The study details that without these measures, Chinese coronavirus cases would probably have been multiplied times 67 to over 7 million.

While China has been accused of failing to stop COVID-19, in fact it took the most stringent measures within the shortest possible time, keeping the virus largely within Wuhan. Statistics show that very few cases were exported from China. New York Gov. Andrew Cuomo has pointed to research by Northeastern University showing that strains of the novel coronavirus found in his state were not from China. The New York Times cited U.S. research that most New York coronavirus cases did not come from Asia.

China put Wuhan under a temporary lockdown as of Jan. 23 — meaning that no outbound commercial flights or train services took place from Jan. 24 through April 8. It was impossible for Wuhan residents to travel overseas during this period.

China collaborated with WHO and U.S. against COVID-19

On Dec. 27, 2019, Dr. Zhang Jixian, director of the respiratory and critical care medicine department of Hubei Provincial Hospital of Integrated Chinese and Western Medicine, had reported three cases of pneumonia of unknown cause immediately after receiving the patients. This was the first report of suspected cases of a new disease by local authorities in China. On the same day, the Wuhan CDC conducted epidemiological investigation and testing on those patients.

After the first public reporting of the pneumonia by the Wuhan Municipal Health Commission on Dec. 13, 2019, China completed the identification and sequencing of the virus as early as Jan. 7. It shared the genome sequence information with WHO and other countries on Jan. 11.

On Jan. 10, the Wuhan Institute of Virology of the Chinese Academy of Sciences and other professional institutions were developing preliminary testing kits and stepped up research on vaccines and effective medication.

The U.S.-based corporate media have spoken at length and with great inaccuracy about Dr. Li Wenliang, including a CNN Opinion piece on Feb. 11 titled “China’s hero doctor was punished for telling truth about coronavirus.” The reality is far more tragic and less favorable to the political program of CNN and other corporate media.

Dr. Li Wenliang was a good doctor who died on Feb. 6 while treating coronavirus patients. He was a member of the Communist Party of China, not a so-called “anti-establishment figure.” On March 5, he was named a “national model healthcare worker in fighting COVID-19.” On April 2, he was honored as a martyr.

Labeling Dr. Li Wenliang as an “anti-establishment hero” or “awakener” rather than as a whistleblower is very disrespectful to Dr. Li and his family. It is purely political manipulation with no sense of decency. On April 28, the Central Committee of the Communist Youth League of China and the All-China Youth Federation jointly issued “May Fourth Medals” to honor outstanding representatives and role models of Chinese youths. Dr. Li Wenliang was among the honorees.

The Independent Media Institute conducted a thorough investigation into the media’s unjust reporting about Dr. Li. In a three-part series published in March and April titled “Truth and Propaganda about Coronavirus,” it concluded that the attempt of the imperialist media to describe what happened to Dr. Li as evidence of the Chinese government’s suppression of information about the virus was simply illogical.

China reports accurately on the virus

China’s relatively low number of confirmed cases and fatalities is attributable to the comprehensive, rigorous and thorough measures taken promptly by the Chinese government — such as completely shutting down transportation from Wuhan. Science magazine estimated in one of its reports that these measures helped prevent at least 700,000 infections in China.

On March 3, Dr. Bruce Aylward, a senior advisor to the WHO Director-General, noted in an interview with U.S. digital media Vox that China is not hiding anything. He expected that the data he collected through talks with physicians from various hospitals and other stakeholders would help corroborate China’s data.

Acting out of a high sense of responsibility to history, to the people and the lives lost to the coronavirus, Wuhan took the initiative to revise the numbers to reflect the facts it had gathered.

China’s style of government was a boon

Viruses do not distinguish between ideologies or social systems. The Communist Party of China and the Chinese government have played a decisive and critical role in leading the Chinese people in the successful fight against COVID-19.

China’s political system, which has effectively united and mobilized 1.4 billion people on a vast land of 9.6 million square kilometers, provided a strong political guarantee for China to overcome the difficulties faced by a developing country in order to pool all its available strengths and resources in winning the battle against the virus. What has happened shows that the social system and development path chosen by the Chinese people suit China’s national conditions and that the CPC enjoys the firm and broad support of the Chinese people.

At a press conference of the WHO-China Joint Mission on COVID-19 on Feb. 24, Dr. Aylward said that China had rolled out probably the most ambitious, agile and aggressive disease containment effort in history. China’s bold approach changed the course of the disease and encompasses the only successful measures known to contain COVID-19.

China firmly supports multilateralism. All along the country has been in good communication and cooperation with WHO and has never attempted to manipulate the organization. The suspension of funding by the U.S., which had been the largest contributor to WHO, has been widely opposed by the international community.

China’s actions with respect to U.S. journalists have been in response to the long-term oppression of Chinese media in the U.S., especially given the recent expulsion of 60 Chinese journalists. China has released information in an open, transparent, responsible and timely manner.

While Taiwan, as part of China, has no right to join WHO, whose membership requires sovereign statehood, the technical cooperation channel between China’s Taiwan and WHO is unimpeded.

The Chinese government and people have provided many shipments of much-needed medical supplies to over 150 countries and international organizations, and these efforts are still ongoing. China has also leveraged its strong production capacity and promptly opened up its medical supplies market and export channels.

Preliminary statistics indicate that by May 6, Chinese provinces, autonomous regions and municipalities, institutions and companies had donated more than 9.6 million masks, 500,000 testing kits, 305,900 pairs of medical and other gloves, and 133,500 goggles to 30 U.S. states and 55 cities.