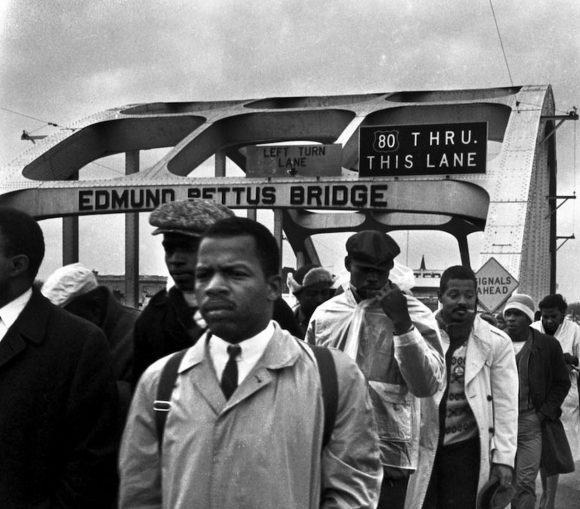 When marchers crossed Edmund Pettus Bridge on Bloody Sunday in 1965, John Lewis led at the front.

Many readers of Workers World newspaper may have watched on July 26 as a horse-drawn caisson carried John Lewis’ body over the Edmund Pettus Bridge in Selma, Ala.

It was on March 7, 1965 —  a Sunday — that this bridge and 25-year-old John Lewis were inextricably joined together in the long history of the Black struggle for liberation.

Since Lewis’ death on July 17, a black-and-white video of that day has been shown countless times in programs honoring the 17-term Georgia congressperson. The sight is chilling no matter how many times one views it: Scores of white Alabama state troopers — some armed with vicious batons, others on horseback — and a mob of rebel-yelling racists by their side, all waiting at the foot of the bridge to assault Black marchers for freedom and civil rights.

The 600 marchers, mostly Selma residents who had been engaged in multiple attempts to register to vote, were prepared to walk all the way to Montgomery, the state capital. They were keenly aware of the assault on Rev. C.T. Vivian the month before, when Dallas County Sheriff Tom Clark struck him in the face and knocked him to the ground as Vivian waited on the courthouse steps to try to register.

Vivian famously and immediately got up to his feet, face bloodied and continued to demand the right to the vote for the Black citizens of Selma. The esteemed Rev. Vivian died the same day as Lewis in the early morning hours of July 17.

John Lewis and Hosea Williams were at the head of the marchers that day on the bridge. The image is unforgettable as all of them walked face-to-face with the threatening state forces and were quickly beaten, teargassed and trampled by horses. Lewis, knocked unconscious after being billy clubbed in the head by a state trooper, suffered a fractured skull.

The brutal assault on the Edmund Pettus Bridge galvanized the Voting Rights movement and was a key action in forcing President Lyndon Johnson to call for passage of the 1965 Voting Rights Bill, signed five months later.

In the decades since 1965, tens of thousands of people have joined John Lewis and the original marchers on the “Bloody Sunday” annual re-creation each March, including this writer. The experience is always quite emotional, even though the mood is now ceremonial and celebratory.

As one looks through the railings at the Alabama River flowing so many feet below, it is easy to imagine the terrifying sounds of night sticks striking bodies, of the shouts and screams as tear gas enveloped the marchers, the panic of trying to escape off the bridge, the fear of being pushed into the river.

And yet, whether you are there surrounded by the throngs who come to honor those heroes of Selma or come with a group of family or friends, you sense the power of people who were united, determined to be free — and who just days later in 1965 marched across that bridge — this time in the thousands — on their way to Montgomery.

There is a national call to rename the  Edmund Pettus Bridge as the John R. Lewis Bridge. Pettus was a general in the Confederate army and was a Grand Dragon of the Ku Klux Klan. The bridge was built and named for him in 1940, during Jim Crow segregation when Black people were not allowed to vote. 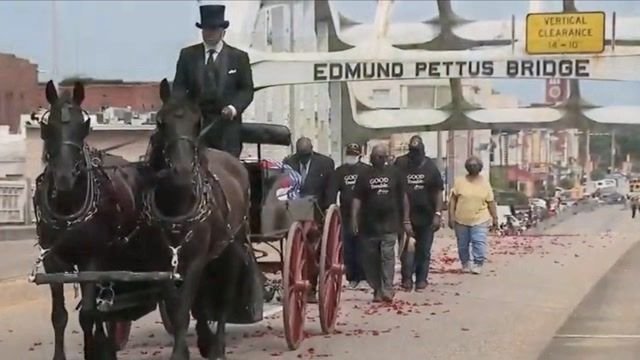 The body of John Lewis crossing the Pettus Bridge for the last time, July 26.