A spirited group of about 100 protesters gathered July 13 in Union Square in New York City to demand justice for Black Lives Matter activist Sandra Bland and all Black womxn, girls and femmes.  The People’s Power Assemblies NYC were the main organizers of the 6th annual Sandra Bland #SayHerName rally and march. The day’s program was titled, “Black Womxn, Girls and Femmes Fight Back!” 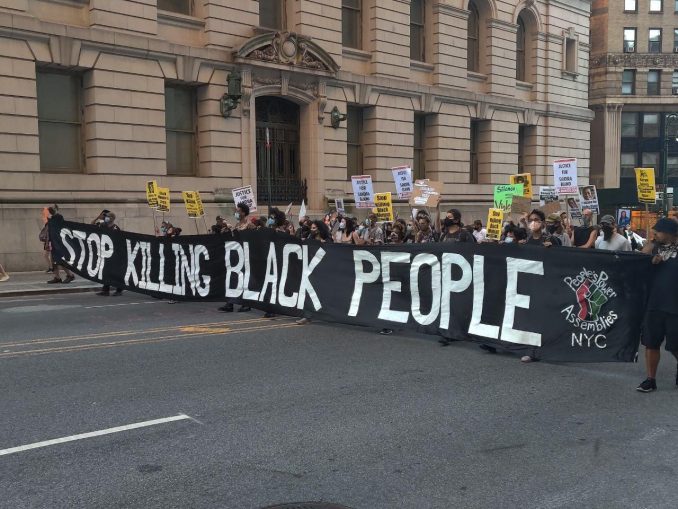 July 13 marked the 5th anniversary of the death of Sandra Bland, an outspoken supporter of the Black Lives Matter movement, who was found hanging in a jail cell in Waller County, Texas, three days after being violently arrested for, supposedly, not using a turn signal on a highway.

Her death at the hands of the police state sparked a national outcry. The July 13 event uplifted those who have been murdered by the state and by extension other agents of white supremacy

Womxn, girls and femmes were memorialized in a ceremony featuring photographs and cards of some of the many girls, women and transwomen killed. Their names were read aloud, and folks present murmured after each name “Ashe,” a West African term defined as “the power to make things happen and produce change.”

Rousing and uplifting speeches were then given by Iman of the December 12th Movement; Brenda Stokely from the International Working Women’s Coalition; Monica Cruz from Party for Socialism and Liberation; Sista Shirley from Staten Island; and Alexandria James, Terrea Mitchell and Samaiyah Patrick from PPA.  Elizabeth Bezile enraptured everyone with her beautiful spoken word pieces. Speakers from other endorsers included Workers World Party, NYC Shut It Down, Gabriela/NYC and many more.

The rally was preceded by a dynamic and informative Zoom webinar titled “Black Womxn, Girls and Femmes: Intimate Violence and Community Accountability.” The presentation discussed domestic and gender violence in the movement and what accountability could look like using transformative and restorative justice,  after the U.S. criminal punishment system is abolished.

We will not be fooled or derailed by fake reforms like body cameras and so-called community policing, which further increase the budget and power of the racist and brutal New York Police Department!

We call for abolition of the police, prisons and all carceral apparatus of the state that continues to murder, maim and disable Black womxn, girls and femmes. We must continue to highlight the many Black women — among them numerous transwomen — who are killed and brutalized by the police in the streets, in the jails, in the prisons.