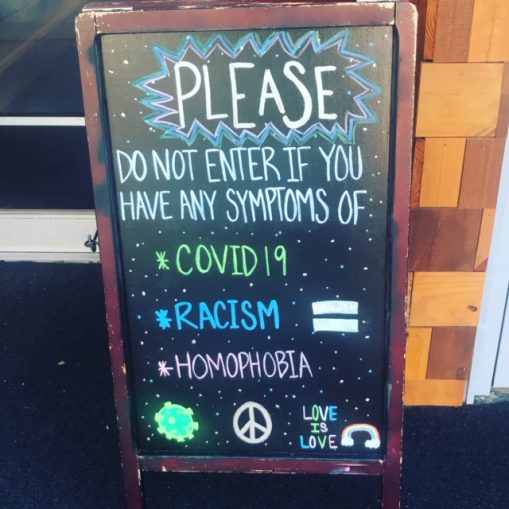 Sign in the window of a Manchester, CT hair salon.

As the coronavirus spreads around the globe, the United States continues to report by far the largest number of cases and deaths. As of July 27, the figures show nearly 4.5 million cases in this country and over 150,000 deaths. That comes to 454 deaths per million people.

By contrast, China has had 3 deaths per million, even though it was the first country to discover the virus and had to start from scratch in figuring out how to deal with the epidemic. Vietnam has had no deaths. Cuba has had 8 deaths per million.

We’ve made this point before, but with each passing day the contrast between the two social systems — capitalism and socialism — becomes more glaring.

Even the U.S. government admits that poverty and racism are factors determining who in this capitalist country gets the disease and who dies from it. The CDC — Centers for Disease Control and Prevention — on July 24 released an updated version of the report, “Health Equity Considerations and Racial and Ethnic Minority Groups.” It shows that racial discrimination by itself is a risk factor, in addition to its damaging effects on health care access and utilization.

People targeted by racism are more likely to work in areas of the economy most exposed to the virus. They suffer from subpar education, low income and wealth gaps, as well as less access to housing, all of which make them more vulnerable in the pandemic.

The spread of COVID-19 in the U.S. has shone a glaring light on the great social inequalities here. At the same time, many people are literally risking their lives to go to work — and to take part in demonstrations against the system.

The risk comes not only from being exposed to the virus in a crowd. One marcher, Garrett Foster, was shot and killed by a right-winger on July 25 while at a Black Lives Matter protest against police brutality in Austin, Texas. Foster was white; his fiancee is Black and a quadruple amputee.

Hatred — the opposite of solidarity — is what drives the far right.

The anthem of the labor movement in the 1930s was “Solidarity Forever.” Today we see courageous people in the streets demonstrating against racism and oppression of all kinds who are reviving the meaning of solidarity.

And solidarity is what is needed to get through this crisis. Solidarity is how China, Cuba and Vietnam have stamped out the virus before it could spread. It takes the active trust of the population in the government and in your fellow workers, neighbors and acquaintances to carry out an effective campaign against this disease.

On a governmental level in the U.S., there is certainly no solidarity. It is a snake pit of rivalry, backstabbing, lying, cheating and accusations. All of it is driven by the viciously competitive character of capitalism. The victor takes the spoils. Whoever takes over the levers of political power — Republican or Democrat — gets to distribute the lucrative government contracts.

But the struggle against this rotten, racist system is building solidarity in the grassroots. We are seeing it in the streets of Portland, Ore., and in all the places where workers come together and risk their lives each day.