Thousands of anti-racist, anti-fascist protesters continue to come out night after night into the streets of Portland, Ore., to protest against police brutality, racism and the iron-fisted federal occupation of the city. After two months of continuous protests in the wake of the murder of George Floyd, the protests swelled yet again after the Trump administration sent federal officers to crush the movement.

The escalation of repression has only invigorated the protesters, with thousands gathering nightly in the epicenter of the protests near two government buildings in the core of downtown Portland. Large protests have occurred in North Portland as well, outside the office of the police “union.” 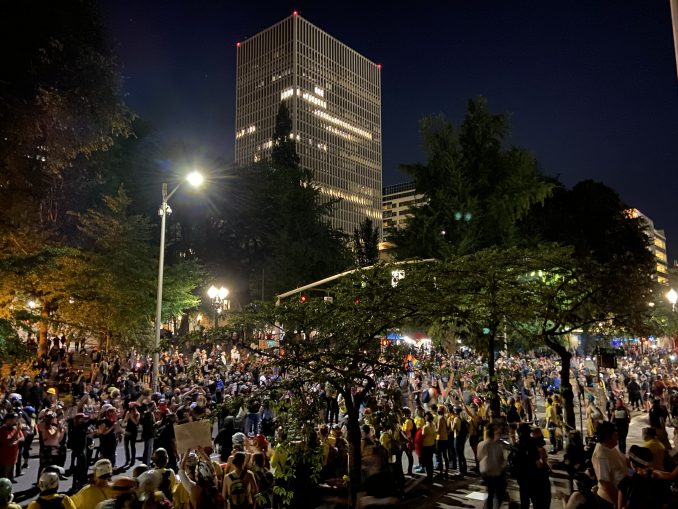 Two downtown parks, encompassing the blocks directly west of the Mark O. Hatfield Federal Courthouse, where federal officers mount their attacks, and the Multnomah County Justice Center, which houses the Portland Police Bureau (PPB) headquarters and the Multnomah County Jail, are being occupied. Protesters have built an area resembling Seattle’s Capitol Hill Organized Protest. Authorities declared the two parks off-limits and fenced them off, but on the night of July 17 protesters tore the fences down and have occupied the area ever since. Federal and city police have not attempted to enforce the parks’ closure or wrest control from the massive crowds.

Tents have been set up where free food is distributed. One called Riot Ribs gives away barbecue and other hot foods to protesters. Donated medical supplies, water, clothing and other gear are distributed freely to anyone who needs it. Like CHOP, the area feels almost like a summer block party with disc jockeys, drummers and dancing in the streets — broken up periodically by tear gas canisters tossed into the crowds. Teams of protesters armed with leaf blowers and hockey sticks quickly clear the tear gas from the area and the dancing starts back up. Soap bubbles float through the air, creating a surreal effect.

Large groups of local moms, dads, union workers, veterans and nurses, many wearing matching colors (the moms wear yellow, for example), are now a regular fixture at the protests, their arrival greeted with thunderous applause and cheers. Some groups march for miles across the city’s heavily populated east side and over the Willamette River into downtown.

While corporate media and the government paint the protesters as only violent — “anarchists” and “terrorists” — the reality on the ground is completely different. A broad section of Portland’s population makes up the crowds, with Black, Indigenous and people of color leading most of the chants and giving most of the speeches.

Trump has stated that the situation in Portland is now under control. Yet the protests are larger and more organized than ever, with federal officers usually hiding behind a hastily welded fence encircling the perimeter of the courthouse. On July 26, that fence was partially torn down.

Trump has offered more federal officers to Portland and to other larger cities such as Seattle and Chicago. A large plane with the Department of Homeland Security logo was spotted at Seattle’s SeaTac airport recently, carrying unknown cargo.

The PPB’s liberal use of tear gas had begun to taper off (though the mayor never banned it entirely), but now federal officers are using massive amounts again. Tear gas had gotten into the ventilation system of the Multnomah County Jail, as high up as the 8th floor, with inmates trapped in their cells while the building is filled with gas. As a result officials at the jail decided to close the ventilation system overnight, which raises concern about the spread of COVID-19.

Many inmates are seniors or have preexisting conditions, making them especially vulnerable to the deadly virus. Being exposed to chemical weapons and a lethal virus while incarcerated represents a serious violation of human rights.

Portland’s mayor, Ted Wheeler, a Democrat with sinking popularity, finally showed up to the protests on July 23, over 50 days after they started. As police commissioner, Mayor Wheeler oversaw the heavy-handed tactics of the PPB in response to the protests, a fact not unnoticed by the thousands of people in the streets.

After giving a speech that was largely drowned out by jeers and boos from the crowd, Mayor Wheeler and many others, including this writer, were teargassed by federal officers. But while the mayor quickly left the scene and took refuge in a municipal office building a block away, the crowds regrouped and continued their protest late into the night.

The situation in Portland remains tense though fluid, with conditions changing rapidly. But for now, the protesters seem to have the upper hand, being able to withstand assaults from the authorities and hold their ground. Donations and people continue to pour in, and despite round-the-clock negative coverage in the corporate media, the protests still enjoy widespread popularity.

This writer, who lives in downtown Portland about five blocks from the protests, has spoken to many downtown residents who are all in solidarity with the movement. They realize that their current difficulties living downtown are the fault of the police and the feds, not protesters.