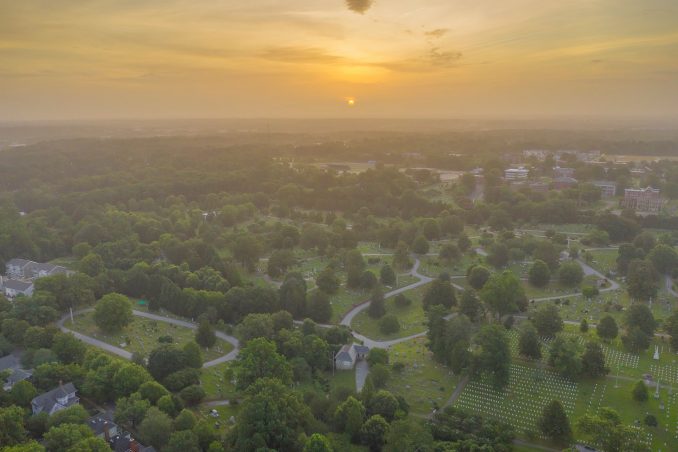 The Sahara Dust Plume over Oakwood Cemetery in Raleigh, N.C., at sunrise, June 28.

Each year, massive dust plumes rise from the Sahara, lifted by local winds after being unmoored by desert conditions. However, over the past four decades, the plumes have been getting larger, and this year marks the largest soil displacement on record. The plume reaches from North Africa across the North Atlantic to the Caribbean, making landfall across the eastern shore of the Americas from Guyana and Venezuela to the U.S. South.

The cloud contains approximately 180 million tons of dust, begins approximately a mile above the surface, is about two miles thick and extends over 5,000 miles as seen from space. It is the thickest, densest and largest since at least 1979 when satellite monitoring began. (National Geographic, June 2020)

As with any natural phenomena, the dust plume itself and its historic size arise from a number of factors. The Sahara cycles between savanna grasslands and desert roughly every 10,000 years, and is about halfway through a desert cycle. But the year-to-year increases in size seem well beyond the natural cyclical process.

“It does look like there’s been an increase in dustiness over the 20th century,” according to Natalie Mahowald, a climate scientist at Cornell University. Mahowald says the size of this year’s cloud and the decades of increasing size are attributable in roughly equal parts to land degradation in North Africa and to human-caused climate change. (National Geographic, June 2020)

Just as the Sahara dust plume takes local conditions and globalizes them, the plume itself emerges from global conditions, created primarily by imperialism. At least two of the factors involved — land degradation and climate change — point to the U.S. empire’s profiteering in the context of the global history of colonialism.

Capitalist production has relied on extreme consumption of nonrenewable coal and oil for everything from heating homes to powering industry to operating the machinery of war. By 2019 the U.S. and the European Union (including Britain) had produced 47% of the world’s greenhouse gases according to the Intergovernmental Panel on Climate Change. (ipcc.ch/sr15)

Rising global temperatures are felt sharply in the Sahara as drought conditions. Since 1950, average temperatures in the Sahara have risen about 3°F, evaporating more of the limited moisture, while the temperature extremes, both hot and cold, have spread further from the average, severely taxing the vegetation that holds the soil in place and prevents erosion. Rainfall has also declined across the region. While it is difficult to measure rainfall in the Sahara, parts of which may go over a year without rain, since 1920 the contiguous area receiving fewer than 4 inches of precipitation annually has expanded by 10%.

Land degradation is of prime concern in the Sahel, the semi-arid transition zone on the south of the Sahara. A beautiful and biodiverse annually forming grassland stretching across the African continent — and nine countries — the Sahel is under continuous strain to provide for a growing population. Over the past few decades more of the Sahel has been used for agriculture, and agriculture in some areas has been industrialized, causing greater impact.

Another aspect of unsustainable agriculture is labor intensification — increasing the number of worker hours per unit of land — usually by letting land lie fallow for a shorter period of time and doing more work on the land between plantings. This is resulting in longer and harsher hours for workers and more profits for bosses.

In the Sahel, 80% to 90% of the economy is agricultural and the population is growing rapidly. As many as 80% of people in the Sahel live by subsistence farming, herding and fishing, with relatively few cash crops, like cotton and peanuts. In some countries pre-COVID-19, other areas contribute to the economy, like mining and tourism. The subsistence economy, even with growing populations, would probably be sustainable. (tinyurl.com/y6bqo3hp)

But profit-motivated practices, tied to the export market, push the Sahel into unsustainably high usage and degrade the soil, making it more vulnerable to being swept away. According to the Transafrican Journal of History, the World Bank and EU (including British) investment into the region is oriented toward commodifying vital resources as cash crops for export and profit by finance capital. (Vol. 21, pp. 36-50, tinyurl.com/y3q36cp5)

Six Sahel nations (Senegal, Mauritania, Mali, Burkina Faso, Niger and Chad) are former French colonies and five remain tied to the French banking system. National treasuries have had to deposit at least half or more of their reserves (formerly 100%) in Paris. National credit policy remains substantially determined by decisions taken in France. Thus, the former colonizer is absorbing financial resources needed to combat soil degradation and many other needs..

An example of the role of U.S. imperialism in Africa via its proxy NATO can be seen in the case of Libya, which is approximately 95% desert and makes up about 20% of the Sahara,  as defined by its land area receiving fewer than 4 inches of precipitation per year.

From March to October 2011, a NATO-led coalition of states, ranging from Belgium to Qatar, launched over 160 tons of cruise missiles and multiple air strikes against the anti-imperialist state of Libya. During that assault, the U.S. installed, recognized and funded with billions of dollars in seized Libyan assets “National Transitional Council” forces. They ultimately captured, tortured and killed the former head of state, revolutionary leader Col. Muammar Gadhafi.

The attacks also destroyed the critical infrastructure of, and the political power to repair, an ambitious Libyan de-desertification project, the “Great Man-Made River.” It was the world’s largest irrigation project, with a network of underground pipes bringing water from an underground aquifer. It also provided a regional jobs program in North Africa.

The U.S.-backed destabilization of Libya ended the de-desertification effort and flooded the Sahel with refugees fleeing U.S. aggression. Most refugees were from the Sahel originally, and had gone to Libya for jobs and as a way station on the route to Mecca. Their return further strained the scarce soil and water resources of the Sahel.

From the debt imposed by global financial capital to military intervention, world imperialism has created unjust and unsustainable conditions in pursuit of wealth and power.