On July 25, 2,000 youthful anti-racists marched here in solidarity with Portland resistance. As in Portland, Ore., federal repressive forces have been sent to Seattle.

The march was called by the Youth Liberation Front. Chanting “Black Lives Matter,” the demonstrators headed to the site of a new youth jail. Located in Seattle’s historic Black community, the youth jail is going through a massive $200 billion construction rebuild. As demonstrators chanted, “Free them all,” five construction trailers were set ablaze at the site. 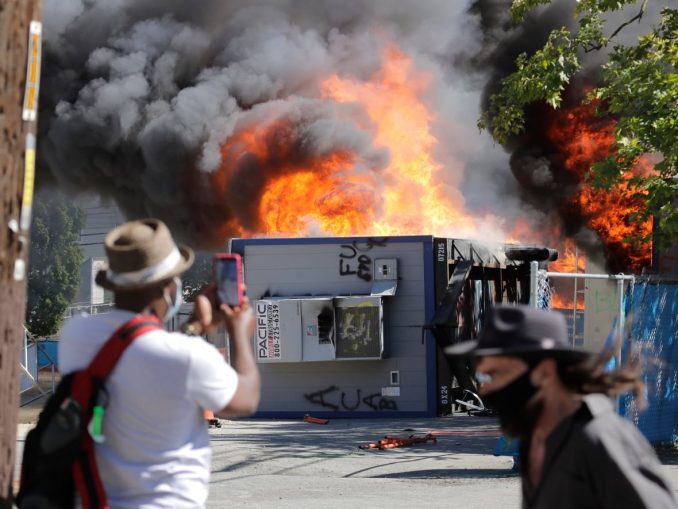 Demonstrators then marched on the East Precinct, a base of police repression. This precinct was forced to close in June for about 20 days after anti-racist resistance to the cops led to the community takeover of six surrounding city blocks. The site was named the Capital Hill Organized Protest and occupied by thousands of people, until police repression forcibly dismantled CHOP.

The East Precinct was attacked by anti-racists during a June 25 demonstration and suffered serious damage. The cops then attacked the protesters, since in their role property is more valuable than working-class human beings. They used blast balls, sponge rounds and pepper spray in a wave of brutality. Forty-five demonstrators were arrested. (South Seattle Emerald)

The July 25 militant mass protest showed that the movement is prepared to answer the racist repression of Trump. The police response proved that Trump and his Democratic Party counterparts in the political establishment of Seattle and Portland are part of the same repressive state apparatus.