Federal officers were deployed to “quell” Portland’s protests beginning the weekend of July 10 and continuing the following week. Camouflaged unidentified agents arrested and detained demonstrators without even a pretext. The Trump administration has escalated the confrontation between the people and the state apparatus, bringing a whiff of fascism to the city. Portland’s movement is fighting back.

Like every large city in the U.S., Portland, Ore., has seen thousands of people pouring onto the city streets, bridges and squares since the murder of George Floyd at the hands of Minneapolis police. People have protested Floyd’s murder and that of all the thousands of other primarily Black, Brown and Indigenous victims of rampant police brutality. In Portland, the protests have continued for over 50 consecutive days. 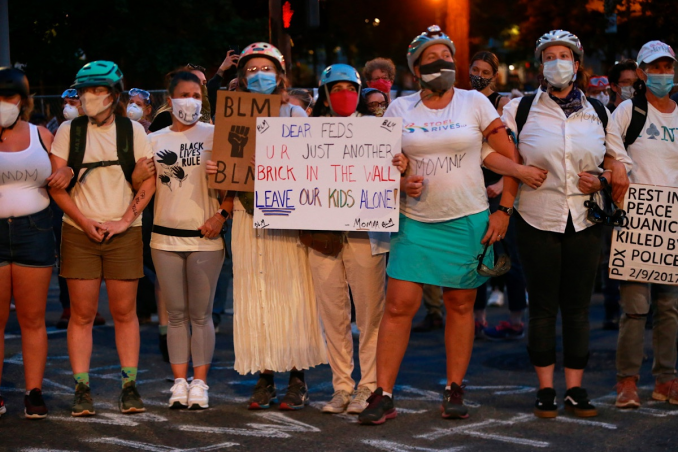 Across the country, this movement against racist police violence has been met with more police violence, choking city centers from coast to coast with tear gas and a wide array of so-called less-than-lethal weapons. Used improperly, as police have done on many occasions, such weapons have in fact been lethal. Tear gas itself is a chemical weapon banned in war by international law.

Ted Wheeler, Portland’s Democratic mayor, has protested Trump’s federal officers, so it might surprise people around the country that the throngs of people who Portland police have brutalized nightly loathe him. Wheeler initially agreed to limit the Portland Police Bureau’s use of tear gas, though not ban it entirely, after mass outrage over the cops’ freewheeling assault with the chemical weapon.

Wheeler is both the mayor and the PPB commissioner and thus has unilateral power within the City Council for PPB assignments. Portland is the last major city in the U.S. that uses the commission form of government, which blends legislative and executive authority by giving the mayor and city commissioners control over individual bureaus like the police bureau, the transportation bureau, the parks bureau, etc.

The mayor has resisted calls to hand over control of PPB to Commissioner Jo Ann Hardesty and end his blatant conflict of interest. Elected in 2018, Hardesty is the first and only Black woman ever elected to the Portland City Council and is seen by many as the most sympathetic to the city’s often raucous activist community.

But the federal repressive forces were even worse than the PPB. Oregon Public Broadcasting reported on July 12 that a U.S. Marshals officer shot protester Donavan LaBella, 26, in the head with “less-than-lethal” munitions in what witnesses described as an unprovoked attack, causing facial and skull fractures that required reconstructive surgeries. LaBella remains hospitalized in critical condition.

The feds move in

Acting head of Department of Homeland Security Chad Wolf arrived in Portland July 16 on Trump’s orders to oversee the federal crackdown. Federal officers have ramped up the use of tear gas, throwing canisters of the chemical weapon into large crowds without warning, which this reporter experienced first-hand the night of July 17.

Multiple reports and video footage portray camo-clad federal officers, who lack any identifying badge numbers or name tags, grabbing people off the streets and pulling them into unmarked vans, then driving them blindfolded to an undisclosed location. Now people know this was the Hatfield Federal Courthouse, one block north of the PPB headquarters, where they were questioned and photographed.

Workers World spoke with a protester (unnamed here for his safety) on the night of July 17, who described how federal officers grabbed him off the sidewalk and shoved him into an unmarked van. He was released the following day after a night of intense questioning at the federal courthouse.

Detainees are either not told what crimes they are being charged with or are given only vague reasons for their detainment. These arrests have aroused anger and concern in Portland. Here fascist paramilitaries dressed in similar camo and gear regularly show up to demonstrations where they assault leftists and aid police.

The federal officers are blurring the lines between themselves and the fascist paramilitaries. Many people suspect that some U.S. Border Patrol officers are involved in these abductions. The Border Patrol has enhanced authority within 100 miles from any coast or border, and thus encompasses Portland and two-thirds of the entire U.S. population.

Local newspaper Willamette Week, after identifying license plate numbers on several vans from video footage of abductions, determined they were rented from EAN Holdings LLC, an operating subsidiary of Enterprise Holdings which owns the Enterprise, Alamo and National car rental brands. This should come as no surprise to anyone who is aware of the deep relationships between corporations and the police.

Greyhound Bus Lines, for example, has been a frequent target of protesters denouncing their collaboration with Immigration and Customs Enforcement agents who conduct raids on Greyhound riders.

Willamette Week reported on July 20 that over the weekend, “Viral videos and photos from Saturday night’s protest showed federal police beating a Navy veteran, Christopher David, with batons and tear gassing a crowd that included Multnomah County Commissioner Sharon Meieran.” Meieran tweeted: “Last night I was teargassed by a federal occupying force I SAW throw canisters of poison, without warning, into a nonviolent crowd, including elders, the vulnerable.”

In previous weeks, crowds had dwindled to hundreds at the nightly protests. Now, the arrival of federal officers and officials has galvanized thousands of people in Portland, including many older residents. Many who don’t typically attend demonstrations are shocked and outraged at what they view as an occupation of their city by violent outside agitators — the federal agents.

Trump’s goal of quelling the protests and intimidating people into staying home has boomeranged, a predictable outcome in a city known for its large, regular protests.

To justify the extreme tactics used by federal officers — tactics that fit former dictator Pinochet’s Chile — DHS acting head Wolf released a list of the dates and locations of graffiti that protesters had painted. If the conflict were less grave, Wolf’s iron-fisted response to graffiti would be laughable. Instead, it underscores the government’s real motive: to crush an anti-racist, anti-fascist people’s movement that has swept the country like wildfire and sustained itself for over two months.

The state seeks any reason, no matter how absurd or untrue, to justify its vicious attacks against protesters. It labels anyone a terrorist or a violent anarchist for involvement in the movement, no matter how peaceful or constitutional their involvement may be.

Even Oregon Gov. Kate Brown, along with many other state and local politicians, has condemned the crackdown as a case of gross federal overreach and asked for the officers to leave. Historically, federal officers have assisted only at the request of state and local leaders. They have never before been imposed by the White House on states, as is happening now in Oregon.

Mayor Wheeler, who joined Gov. Brown in condemning the violent presence of federal officers, initially assured the public that the PPB, under his direct control, was not coordinating with federal officers and would not do so. Yet after several nights of protests, it has become clear that PPB officers have advanced on protesters in coordination with federal agents.

Deputy Chief Chris Davis revealed to state lawmakers in a legislative hearing that “a member of the Federal Protective Service is in the Portland Police command post during downtown demonstrations.”

Commissioner Hardesty issued this public statement July 18 on Twitter: “We know that Portland Police Association President Daryl Turner met with DHS Secretary Chad Wolf. We know Portland Police are collaborating with this federal occupying force.” To date, Secretary Wolf has only met with Turner and not with any city or state officials.

The federal government’s escalation occurs just months before the 2020 general election as Trump’s position in election polls plummets. Desperate to reverse his fortune, Trump and his backers, including the cops, could be using Portland to test authoritarian tactics, preparing to use them elsewhere.

It is encouraging that the first reaction from Portland was to meet the escalated repression with an escalated fight — with a “Wall of Moms” shielding the protesters at the Federal Courthouse. It’s a good beginning. The state’s repression and fascistic tactics must be met by an anti-racist, anti-fascist people’s movement that will never stop pushing its demands for justice and freedom from racism, white supremacy and police brutality.